The Saar Protectorate (German: Saarprotektorat; French: Protectorat de la Sarre) was a short-lived protectorate (1947–1957) partitioned from Germany after its defeat in World War II; it was administered by the French Fourth Republic. On rejoining West Germany in 1957, it became the smallest "federal state" (Bundesland), the Saarland, not counting the "city states" (Stadtstaaten) of Berlin, Hamburg, and Bremen. It is named after the Saar River.

The region around the Saar River and its tributary valleys is a geographically folded, mineral-rich, ethnically German, economically important, heavily industrialized area. It has well-developed transportation infrastructure, and was one of the centres during the Industrial Revolution in Germany. Around 1900, the region formed the third-largest area of coal, iron, and steel industry in Germany (after the Ruhr Area and the Upper Silesian Coal Basin). From 1920 to 1935, as a result of World War I, the region was under the control of the League of Nations as the Territory of the Saar Basin. Near the end of World War II it was heavily bombed by the Allies as part of their strategic bombing campaigns.

Geographically, the post–World War II protectorate corresponded to the current German state of Saarland (established after its incorporation into West Germany on 1 January 1957). A policy of industrial disarmament and dispersal of industrial workers was officially pursued by the Allies after the war until 1951 and the region was made a protectorate under French control in 1947. Cold War pressures for a stronger Germany allowed renewed industrialization, and the French returned control of the region to the government of the Federal Republic of Germany in 1957.

The region had been previously annexed by France (« bailliage de Sarrelouis », 1685) or occupied during the Revolution (1790–1798) and the Napoleonic Wars, when it had been included in the First French Empire as the département de la Sarre between 1798 and 1814.

Under the Treaty of Versailles, the Saar was occupied initially by combat units from the United Kingdom and France. In 1920 Britain and France established for the League of Nations mandate of the Saar a nominally independent occupation government was set up to control an area as to the greater part carved out of the Prussian Rhine Province and supplemented by two Bavarian districts (Homburg and St. Ingbert), ceded from the Palatinate. This was sanctioned by a 15-year League of Nations mandate which stationed League of Nations troops from Italy, Sweden, and the United Kingdom in the Saar until 1935. The Saar's coal industry, the dominant industry in the region at the time, was nationalized and directly administered by France, in compensation of the destruction of French mines by the retreating Germans in 1918.

On 13 January 1935, a plebiscite held in the territory at the end of the 15-year term, resulted in 90.7% of voters casting their ballot in favour of a return to Germany, and 0.4% voting for union with France. Others (8.9%) favoured the third option of a continued British–French occupation government. After political agitation and maneuvering by Chancellor Adolf Hitler for the re-union of the Saarland with the German Reich (Rückgliederung des Saarlandes) it was reincorporated in 1935. Its area was not redivided among the Prussian Rhine Province and the Bavarian Palatinate, but united with the latter as the Gau of Saar-Palatinate (Saarpfalz). In 1942 it was renamed Westmark (Western Boundary) of the Reich. This renaming intended its territorial enlargement by parts of German-occupied French Lorraine which, however, did not materialise. 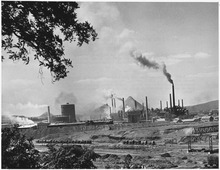 View of steel and ironworks in the Saar, c.1950

In July 1945, two months after World War II had ended in Europe, the Allied forces were redeploying from the areas they had conquered into their respective zones of occupation. On 10 July 1945, US forces left the Saar and French troops established their occupational administration. On 16 February 1946, France disentangled the Saar from the Allied zones of occupation and established the separate Saar Protectorate, which was no longer under the joint Allied jurisdiction by the Allied Control Council for Germany.

French officials deported a total of 1,820 people from the Saar in 1946 and 1947, most of whom ultimately were allowed to return.[2] However, France had not agreed to the expulsions approved (without input from France) in the Potsdam agreement by the Allies, so France refused to accept war refugees or expellees from the eastern annexed territories in the Saar protectorate or the French zone.[3] However, native Sarrois returning from Nazi-imposed removals (e.g. political and Jewish refugees) and war-related relocations (e.g. evacuation from air raids) were allowed to return to the areas under French control. France aimed at winning over the Saar population for a future annexation.

The principal reason for the French desire for economic control of the Saar was the large coal deposits. France was offered compensation for the return of the Saar to Germany: the treaty permitted France to extract coal from the Warndt coal deposit until 1981.

In the speech Restatement of Policy on Germany, given in Stuttgart on 6 September 1946, the US Secretary of State James F. Byrnes stated the US's motive in detaching the Saar from Germany as "The United States does not feel that it can deny to France, which has been invaded three times by Germany in 70 years, its claim to the Saar territory". 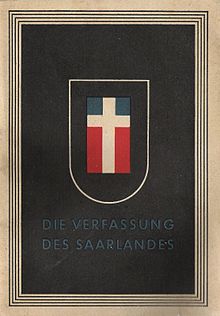 On 16 July 1947 the Saar mark replaced the Reichsmark as legal tender in the Saar Protectorate, followed by the integration of the Saar into the French currency area on November 15 the same year. While only French franc banknotes circulated from 1954 on, Saar franc coins, designed similar to French coins, were issued too. On 15 December 1947 the Saar was constituted by its constitution as the Saarland, with an elected government under the control of the French high commissioner Gilbert Grandval. On 23 March 1948 the customs union with France was confirmed, taking effect on 1 April. In July the same year the Sarrois nationality replaced the German nationality of the Saar population.

Initially, a policy of industrial disarmament was pursued in Germany by the Allied powers (see industrial plans for Germany). As part of this policy limits were placed on permitted production levels, and industries in the Saar were dismantled as they had been in the Ruhr, although mostly in the period before the detachment (see also The 1949 letter from the UK Foreign minister Ernest Bevin to the French Foreign minister Robert Schuman, urging a reconsideration of dismantling policy). This policy was quickly reversed in mid-1946 or early 1947.

Under the Monnet Plan France attempted to gain economic control of the German industrial areas in its assigned zones, especially areas with large coal and mineral deposits, such as the Ruhr (in the British zone) and the Saar. Similar attempts to gain control of, or permanently internationalise, the Ruhr (see International Authority for the Ruhr) were abandoned in 1951, when France rejected the traditional aims of European hegemony predicated upon European enmity.[further explanation needed] In the face of US and Soviet domination of Europe the French government took a historic step in deciding that the only viable political model for the future lay in European integration; this resulted in the Schuman Declaration in 1950, a plan drafted for the most part by Jean Monnet. The plan put forward France and Germany as the core of a new Europe, requiring a rapprochement and the establishment of close ties between the two states. As a first step France and Germany were to agree to pool their coal and steel resources (see European Coal and Steel Community). German participation in the plan was contingent upon a return of full political control of German industry to the western Federal Government of Germany. However, France delayed the return of the Saar in the hope of cementing its economic control over the region.

Under French rule, pro-German parties[5] were initially banned from contesting the elections. Much support was given to the Mouvement pour le Rattachement de la Sarre à la France, a Francophile movement founded by Saar exiles in Paris in early 1945, with many of the exiles having returned after the war. However, a French annexation did not gain the support of a majority of the Sarrois. In the general election of December 1952, 24% of the voters cast blank ballots in support of banned pro-German parties (while the majority still voted for one of the legal parties who wanted the Saar to remain autonomous).

Referendum and the little reunification with Germany

In the Paris Agreements of 23 October 1954, France offered to establish an independent "Saarland", under the auspices of the Western European Union (WEU), but a referendum held on 23 October 1955 rejected this plan by 67.7% to 32.3% (out of a 96.5% turnout: 423,434 against, 201,975 for) despite the public support of West German Chancellor Konrad Adenauer for the plan. The rejection of the plan by the Sarrois was interpreted as support for the Saar to join the Federal Republic of Germany.[6]

On 27 October 1956 the Saar Treaty established that Saarland should be allowed to join West Germany, as provided by its Grundgesetz constitution art. 23, and so Saarland did on 1 January 1957. West Germany had to agree to the channelization of the Moselle. This reduced French freight costs in the Lorraine steel industry. West Germany was also made to agree to the teaching of French as the first foreign language in schools in the Saarland; although no longer binding, the agreement is still in the main followed as the practice is well-established.

The treaty also stated that economic union with West Germany was to be completed by 1960, with the exact date of the replacement of the Saar and French franc by the Deutsche Mark being kept a secret called "Day X" (Tag X). Although the Saar joined West Germany (as Saarland) on 1 January 1957, the franc remained legal tender in Saarland until 6 July 1959. Thus on that date the Kleine Wiedervereinigung (little reunification) was completed, after 14 years of separation.

As a footnote to the creation of the European Union, the territorial dispute over control of the Saarland was one of the last between member states and led to the European flag being given a politically neutral ring of twelve stars rather than the originally proposed 15 (one of which was to represent a nominally independent Saar as a member of the Council of Europe).[7]

High Commissioner of the French Republic in the Saarland

The Saar competed in the 1952 Summer Olympics in Helsinki, and the Saarland national football team participated in the qualifying section of the 1954 FIFA World Cup, but failed to qualify after coming second to the West German team, but ahead of Norway.[8] Helmut Schön, later World and European champion with West Germany, was the manager of the Saarland team from 1952 until Saarland became a part of West Germany in 1957.[9]

The Amateurliga Saarland was the local league within the German Football League System. 1. FC Saarbrücken took part in the first ever European Cup in 1955.