The S Group (Finnish: S-ryhmä, Swedish: S-gruppen) is a Finnish retailing cooperative organisation with its head office in Helsinki.[2] Founded in 1904, it consists of 20 regional cooperatives operating all around Finland in addition to SOK, Suomen Osuuskauppojen Keskuskunta (The Central Finnish Cooperative Society). S Group operates in the markets for groceries, consumer durables, service station, hotel and restaurant services. It is engaged in close competition with Kesko, with which it shares an oligopolistic position in many of the markets it operates in.

The group has businesses in Finland, Estonia, and Russia. The S Group also had businesses in Latvia and Lithuania, but announced withdrawal from these markets in May 2017.[3]

A client can invest a small sum on the local co-operative and become a client-owner. (The exact sum is decided by the local co-operative board and varies significantly depending on local conditions.) A client-owner gets a membership card, S-Etukortti, which functions as a debit or credit card and gives access to special client-owner bargains. For the sums spent in S Group stores, Bonus is paid back to the client into the account at S-Bank. The Bonus percentage varies from 1% to 5% depending on the sum spent. S-Bank pays an interest that is competitive with interests paid by general banks into savings accounts. S-Etukortti is not a regular "loyalty card" as it represents actual monetary investment and the return is formally profit, not discount.

35 members of parliament in 2012 were representatives in the S Group or Tradeka (Siwa) corporate governance.[4] 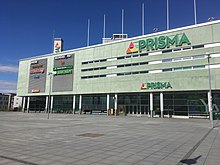 The S Group's supermarkets retail the general private brands Rainbow and Kotimaista for products made in Finland, and the no-frills X-tra range in partnership with Coop Trading — a Nordic purchasing organisation for co-operatives. Non-food products are marketed under the House name.

The S Group has grown significantly in Finland in recent years, growing both organically and by acquisition.

SOK has a key position in the history of Finnish architecture due to its policy in the late 1920s and 1930s of designing cutting-edge Modernist architecture, epitomized by a Functionalist aesthetic of white buildings.[6] The key architect designing for SOK in the initial years was Erkki Huttunen (1901–1956), who designed various types of buildings for the company: from grain silos and mills to local village shops. Among his best-known works for SOK are the Toppila mill (1929, pictured right), the SOK Offices and Warehouse (1937-38) in Oulu, the SOK Offices and Warehouse (1931) in Rauma, and the Aitta Cooperative Shop (1933) in Sauvo. Today, many of these buildings are protected by law.[7]

The S Group also operates the Sokos chain of department stores, ABC service stations, the hotel chain Sokos Hotels, several brands of restaurants such as Rosso, Sevilla and Amarillo, the Agrimarket chain, which sells agricultural and DIY supplies, and a number of car dealerships for Peugeot.