Founded in 1924, SAGEM initially specialised in mechanical engineering and tool manufacture. Early in its existence it entered the defense sector. The company made a foray into telecommunications in 1942 with the first telex printer, although it was principally a defense-oriented company during the first few decades of the post-war era. This majority focus upon the military sector continues for several years after the departure of Marcel Môme, SAGEM's founder.

During the 1980s, SAGEM's response to the newly-developed fax machines by distributing Japanese fax machines while developing its own technology allowed it to quickly innovate and gain marketshare as a major player in telecommunications. Such products comprised a growing share of SAGEM's revenues over the traditional defense sector. During the 1990s, the firm went into automotive systems, becoming a large supplier of that sector. Starting in 1997, the sales of mobile phones grew enormously. SAGEM rapidly became one of the world's leading manufacturers of GSM telephones, as well as the undisputed leader of the French market, at one point holding roughly 50% of the market.

By the turn of the century, SAGEM was a highly profitable company, with net profits nearing the FFr 1 billion mark during 1999. In 2005, SAGEM and SNECMA merged to form Safran. Together, the companies focus mainly on aeronautics, defense and security. The communications and mobile telephony businesses were spun off as two independent entities: SAGEMCOM and MobiWire.

In 1924, 25 year old French businessman Marcel Môme founded Société d’Applications Générales de l’Électricité et de la Mécanique (SAGEM).[1] Môme would be a key figure for the business in its first four decades, and remained at the head of the company until 1962. Based in Paris, SAGEM specialized in mechanical engineering. Early products included electrical components, power distribution equipment, cameras, projectors and other equipment. A key early customer of SAGEM was the French tyre manufacturer Michelin, for which the company produced numerous tools and other equipment. The firm also chose to market its products to the defense industry.[1]

In 1942, following a request from the French Ministry of Telecommunications, SAGEM developed a new communication system, the telex printer. This product marked the company's move toward a larger involvement in the telecommunications sector. After Second World War, the company became increasingly involved in France's defense and aeronautical industries.[1] In 1961, SAGEM was selected to provide the inertial navigation systems for France's first ballistic missiles, as well as the optical and navigation systems for the first ballistic missile submarines. The company maintained its focus on the defense industry even after the retirement of Môme. Robert Labarre took over the leadership role from Môme as SAGEM's second president, remaining in this role until 1987.[1]

Although primarily a defense contractor in the post-war era, SAGEM also developed telecommunications products, including a range of telex machines and becoming the world's number two manufacturer in the category.[1] SAGEM's management emphasised the importance of research and development, enabling it to capture a leading role in communications technology during the early 1980s, when it released the next generation of screen-based telex machines.[1]

Its focus on research helped SAGEM to respond to the arrival of the fax machines, which had originated in Japan and brought an abrupt end to the monopoly of the costly telex machine.[1] Rather than responding with the costly development of its own product to challenge this new technology, while eager to maintain its prominent position in the telecommunications sector, SAGEM adopted another approach by negotiating a distribution agreement with Japanese electronics business Murata.[1] Under this deal, SAGEM marketed several of Murata's fax machines in Europe, and adapted these machines to the requirements of the European market. It used the distribution arrangement to assist development of SAGEM's own fax machine technology and subsequently entered the market with its own products.[1]

During 1985, Robert Labarre was in the process of transferring control of SAGEM to Pierre Faurre following a management buyout.[1] Seeing the potential of the telecommunications sector, Faurre reshaped SAGEM into one of Europe's leading high-technology specialists. This shift was motivated by declining defence budgets across Europe and the Soviet Union liberalisation, making involvement in the defence sector less attractive.[1] During the late 1980s, the firm released several innovations in the fax machine market, including the first machine capable of printing on standard paper (instead of expensive thermal paper) and the first home consumer units. During this era, SAGEM experienced rising sales, topping the FFr 10 billion mark in 1990. Communications products comprised a growing share of the company's revenues over the defense sector.[1]

Throughout the 1990s, the telecommunications sector continued to expand, seeing rapid advances in mobile telephony, the arrival of digital television technologies and the emergence of the early 'net-economy'.[1] SAGEM, who had developed a reputation as a successful high-tech manufacturer with a broad range of electronics and communications products was positioned to exploit this climate. In the mid-1990s, the firm adapting its technology to automotive control systems and other vehicle subsystems, quickly becoming a major European automobile electronics supplier.[1] Other product lines SAGEM went into in this period included television sets, credit card readers and digital set-top boxes.[1]

Starting in 1997, sales of mobile phones grew enormously. SAGEM rapidly became one of the world's leading manufacturers of GSM telephones, as well as the leader of the French market, at one point holding roughly 50% of the market.[1] This sector's growth was combined with other gains, including returns on its investment in internet technologies. In 1999, SAGEM's revenue increased by more than 19% over the previous year's, exceeding FFr 22.3 billion. The firm was highly profitable, seeing net profits nearing the FFr 1 billion mark.[1]

The defence electronics branch of SAGEM remained active during this time, despite its declining prominence in the group. Several deals to overhaul and upgrade aerospace assets were secured during this period.[2][3] In June 1996, SAGEM was selected to upgrade the electronic systems of some France-built Mirage aircraft of the Pakistan Air Force, under the ROSE upgrade (Retrofit of Strike Element) program.[4] Maintaining an interest in unmanned aerial vehicles (UAVs), the company struck deals with Dassault Aviation and General Electric.[5][6]

In 2005, SAGEM and SNECMA merged to form SAFRAN.[7][8] In 2007, SAGEM launched its mobile phones into the Indian market, marketed under the tradename "Bleu".[9] 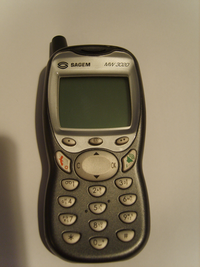