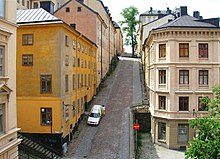 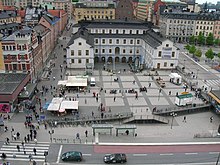 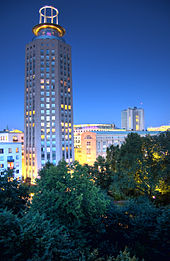 Söder Torn, an 86-meter-tall building near Medborgarplatsen. Built in 1997 after drawings from the Danish architect Henning Larsen.

Södermalm (Swedish for 'Southern Island'), often shortened to just Söder, is a district and island in central Stockholm.

The district covers the large island of the same name (formerly called Åsön). Although Södermalm usually is considered an island, water to both its north and south does not flow freely but passes through locks.

Södermalm is connected to its surrounding areas by a number of bridges. It connects to Gamla stan to the north by Slussen, a grid of road and rail and a lock that separates the lake Mälaren from the Baltic Sea, to Långholmen to the northwest by one of the city's larger bridges, Västerbron, to the islet Reimersholme to the west, to Liljeholmen to the southwest by the bridge Liljeholmsbron, to Årsta by Årstabron and Skansbron, to Johanneshov by Johanneshovsbron and Skanstullsbron to the south, and, finally, to Södra Hammarbyhamnen to the east by Danvikstull Bridge.

Administratively, Södermalm is part of Stockholm Municipality. It constitutes, together with Gamla stan and some other districts, from 2007 the administrative district Södermalms stadsdelsområde, often translated as Södermalm borough.

Wooden buildings on Södermalm in 1924, drawn by Ferdinand Boberg.

The name Södermalm (as Suthaermalm) is first mentioned in 1288 in a letter from Bishop Anund of Strängnäs. Until the early 17th century Södermalm was mainly a rural, agricultural area.[1] Its first urban areas were planned and built in the mid 17th century, comprising a mixture of working class housing, such as the little red cottages of which a few can still be seen in northeastern Södermalm, and the summer houses and pavilions of wealthier families, such as Emanuel Swedenborg's pavilion, which is now in the outdoor museum Skansen. During this time, it was also the location of perhaps the first theatre in Scandinavia, Björngårdsteatern. Södermalm is often poetically named Söders höjder ("heights of the south"), which reflects its topography of sheer cliffs and rocky hills. Indeed, the hills of Södermalm provide remarkable views of Stockholm's skyline.

In the 18th century, the working-class cottages that clung to Mariaberget, the steep cliffs facing Riddarfjärden, were replaced by the large buildings that are still present today. It was not until the beginning of the 20th century that urbanization grasped the entire width of Södermalm, and even today parts of Södermalm have a rural feeling to them, as for instance the landscape of tiny allotments that climb the slopes of Eriksdal.

Södermalm was once known as the "slum" area of Stockholm. However today, Södermalm is known as the home of bohemian, alternative culture and a broad range of cultural amenities. Meanwhile, the growing demand for housing, as well as an increasing gentrification of Stockholm's central parts, makes apartments in Södermalm more and more difficult or expensive to come by. Thus what was once a working-class district is now somewhat a district of the privileged.[2]

There are four parishes of the Church of Sweden on the island (from west to east):

Södermalm is roughly divided into the following neighbourhoods (from west to east): 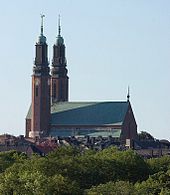 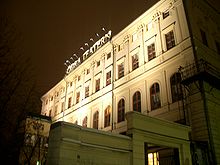 In poetry and fiction