The Ryerson Rams are the athletic teams that represent Ryerson University in Toronto, Ontario, Canada.

Ryerson University operates 13 men's and women's interuniversity sports teams that compete nationally through Ontario University Athletics (OUA) and U Sports. The Rams compete in men's and women's hockey, volleyball, basketball, soccer. They have co-ed badminton, fencing, golf and rowing. In addition there is a women's figure skating team and a men's cricket team. The team mascot is Eggy the Ram and can be seen at most major events.

The Ryerson Rams men's basketball team is led by head coach Roy Rana with the assistance of eight more staff members.[2] Their 2012-2013 roster currently includes 17 players, of which 7 are first year students at the university.[3] In 2013, the Mattamy Athletic Centre hosted the Wilson Cup.

Ryerson used to have a football team which was coached, for much of its existence, by former Toronto Argonauts player Ted Toogood, who also served as Ryerson's first Athletic Director from 1949 to 1961. In 1958, the Rams won the Intermediate Intercollegiate Ontario-Quebec Conference championship. The football program was ended following the 1964 season due to costs, the lack of proper facilities, and poor attendance.[4] 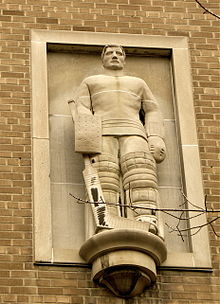 Until the end of the 2011-2012 season, the Rams' basketball and volleyball teams played primarily out of Kerr Hall West Gymnasium, a triple gym in Kerr Hall West. The men's hockey team also played off campus, using the ice rinks at George Bell Arena in The Junction. The men's and women's soccer teams continue to call Allan Lamport Stadium home, a field located near King Street and Dufferin Street in downtown Toronto, but most games and practices are now at Downsview Park Sports Centre.

In November 2009, Ryerson University announced that Maple Leaf Gardens would become the new home of the Rams' athletes.[5] The school partnered with the Canadian Government and supermarket company Loblaws to cover funding for the project, which was estimated to cost millions of dollars. Approximately $20 million was contributed by Ryerson students, $20 million given by Federal Government and $15 million from Peter Gilligan.[6] In addition, Loblaws, the grocery retailer, made significant financial contributions.[7] The renovation took place over nearly three years, with the ground level hosting a Loblaws Supermarket, and the Ryerson Ram space which includes: an NHL-sized ice rink, known as Mattamy Home Ice, a 4-lane 200m running track, a fitness centre as well as a multipurpose court for basketball and volleyball called the Coca-Cola Court.[8] BBB Architects & Stadium Consultants International has designed the new facility - the Mattamy Athletic Centre at the Gardens - which was completed in time for the 2012-13 OUA season.[citation needed]

In August 2012, Prime Minister Stephen Harper visited the newly constructed centre. He referred to the project as, "a perfect example of how a strategic infrastructure investment can create jobs, can preserve our history and can meet the need for a new facility.[6]" The facilities aside the Mattamy expansion are: squash courts, a pool, studios, and a fitness centre.[8]

Since Ryerson opened in 1948, the logo for the Rams has changed along with the former technical institute becoming a university.[9] From 1965 until 2010, the Ryerson Rams' logo was a blue outline of a ram's head but in 2011, they updated to a more cartooned version of a ram, in their signature colours of blue and gold.[9]