The Ruwenzori, also spelled Rwenzori and Rwenjura, are a range of mountains in eastern equatorial Africa, located on the border between Uganda and the Democratic Republic of the Congo. The highest peak of the Ruwenzori reaches 5,109 metres (16,762 ft), and the range's upper regions are permanently snow-capped and glaciated. Rivers fed by mountain streams form one of the sources of the Nile.[1] Because of this, European explorers linked the Ruwenzori with the legendary Mountains of the Moon, claimed by the Greek scholar Ptolemy as the source of the Nile. Virunga National Park in the Congo and Rwenzori Mountains National Park in Uganda are located within the range.

Margherita Peak on Mount Stanley is the highest point in the range.

The mountains formed about three million years ago in the late Pliocene epoch and are the result of an uplifted block of crystalline rocks including gneiss, amphibolite, granite and quartzite.[2]

The mountains are occasionally identified with the legendary "Mountains of the Moon", depicted in antiquity as the source of the Nile River.[1]

Photographer Vittorio Sella took a number of photographs of the Ruwenzori Mountains during the late 19th and early 20th centuries, documenting the retreat of the range's glaciers.[5] Sella's photographic work is conserved at the Museo Nazionale della Montagna in Turin and at the Istituto di Fotografia Alpina Vittorio Sella in Biella, both in Italy. The Makerere University, Uganda, also has a selection of his images.[6]

The first traverse of the six massifs of the Ruwenzori was done in 1975, starting on 27 January and ending on 13 February. The traverse was done by Polish climbers Janusz Chalecki, Stanisław Cholewa and Leszek Czarnecki, with Mirosław Kuraś accompanying them on the last half of the traverse.[7]

Lower Bigo Bog at 3400 m in the Ruwenzori, with giant lobelia in foreground

The Ruwenzori are known for their vegetation, ranging from tropical rainforest through alpine meadows to snow. The range supports its own species and varieties of giant groundsel and giant lobelia and even has a 6 metres (20 ft) tall heather covered in moss that lives on one of its peaks. Most of the range is now a World Heritage Site and is covered jointly by Rwenzori Mountains National Park in southwestern Uganda and the Virunga National Park in the eastern Congo.[4]

There is no water shortage in the Ruwenzori; yet, several members of the afro-alpine family resemble species that normally thrive in desert climates. The reason lies in their similar water economy. Water is not always readily available to the afroalpine plants when they need it. In addition, nightly frosts affect the sap transport in the plants and the intake of water by its roots. As the day begins, the air temperature and radiation level rise rapidly, putting strenuous demands on the exposed parts of the plants as they try to meet the transpiration demands of the leaves and maintain a proper water balance. To counter the effects of freezing, the afro-alpine plants have developed the insulation systems that give them such a striking appearance. These adaptations become more prominent as the elevation increases.[6] 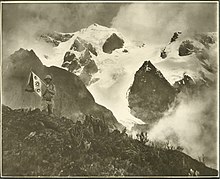 Ornithologist James P. Chapin on a Ruwenzori expedition under flag of The Explorers Club, 1925

An ongoing concern is the impact of climate change on the Ruwenzori's glaciers. In 1906, forty-three named glaciers were distributed over six mountains with a total area of 7.5 square kilometres (2.9 sq mi), about half the total glacier area in Africa. By 2005, less than half of these were still present, on only three mountains, with an area of about 1.5 square kilometres (0.58 sq mi). Recent scientific studies, such as those by Richard Taylor of University College London, have attributed this retreat to global climate change and have investigated the impact of this change on the mountain's vegetation and biodiversity.[11][12][13]