Ruthenians and Ruthenes are Latin exonyms formerly used in Western Europe for the ancestors of modern East Slavic peoples, especially the Rus' people with an Eastern Orthodox or Ruthenian Uniate Church religious background.[1][2] The corresponding word in the Polish language is "rusini" and in Ukrainian language is "русини" (rusyny).[3]

From the 9th century, the "land of the Rus'", known later as Kievan Rus', was known in Western Europe by a variety of names derived from Rus'. In its broadest usage, "Ruthenians" or "Ruthenes" referred to peoples which were ancestors of the modern Belarusians, Rusyns and Ukrainians.

Ruthenians (Rutheni), an illustration in a book by Pietro Bertelli, 1563

One of the earliest references to Rus' in a Latinised form was in the 5th century, when King Odoacer styled himself as "Rex Rhutenorum".[5]

Ruteni, a misnomer that was also the name of an extinct and unrelated Celtic tribe in Ancient Gaul,[3] was used in reference to Rus' in the Annales Augustani of 1089.[3] An alternative early modern Latinisation, Rucenus (plural Ruceni) was, according to Boris Unbegaun, derived from Rusyn.[3] Baron Herberstein, describing the land of Russia, inhabited by the Rutheni who call themselves Russi, claimed that the first of the governors who rule Russia is the Grand Duke of Moscow, the second is the Grand Duke of Lithuania and the third is the King of Poland.[6][7] According to professor of Ukrainian origin John-Paul Himka from the University of Alberta the word Rutheni did not include the modern Russians, who were known as Moscovitae.[3] Modern studies, however, indicate that even after the 16th century the word Rutheni was associated with all East Slavs. Vasili III of Russia, who ruled the Grand Duchy of Moscow in the 16th century, was known in European Latin sources as Rhuteni Imperator.[8] Jacques Margeret in his book "Estat de l'empire de Russie, et grande duché de Moscovie" of 1607 explained, that the name "Muscovites" for the population of Tsardom (Empire) of Russia is an error. During conversations, they called themselves rusaki (which is a colloquial term for Russians) and only the citizens of the capital called themself "Muscovites". Margeret considered that this error is worse than calling all the French "Parisians."[9][10] Professor David Frick from the Harvard Ukrainian Research Institute has also found in Vilnius the documents from 1655, which demonstrate that Moscovitae were also known in Lithuania as Rutheni.[11]

After the partition of Poland the term Ruthenian referred exclusively to people of the Rusyn- and Ukrainian-speaking areas of the Austro-Hungarian Empire, especially in the Kingdom of Galicia and Lodomeria, Bukovina, and Transcarpathia.[3]

At the request of Mykhajlo Levitsky, in 1843 the term Ruthenian became the official name for the Rusyns and Ukrainians within the Austrian Empire.[3] For example, Ivan Franko and Stepan Bandera in their passports were identified as Ruthenians (Polish: Rusini).[12] By 1900 more and more Ruthenians began to call themselves with the self-designated name Ukrainians.[3] A number of Ukrainian members of the intelligentsia, such as Mykhailo Drahomanov and Ivan Franko, perceived the term as narrow-minded, provincial and Habsburg.[citation needed] With the emergence of Ukrainian nationalism during the mid-19th century, use of "Ruthenian" and cognate terms declined among Ukrainians and fell out of use in Eastern and Central Ukraine. Most people in the western region of Ukraine followed suit later in the 19th century. During the early 20th century, the name Ukrajins’ka mova ("Ukrainian language") became accepted by much of the Ukrainian-speaking literary class in the Austro-Hungarian Kingdom of Galicia and Lodomeria.[citation needed]

Following the dissolution of the Austro-Hungarian Empire in 1918, new states emerged and dissolved; borders changed frequently. After several years the Rusyn and Ukrainian speaking areas of eastern Austria-Hungary found themselves divided between the Ukrainian Soviet Republic, Czechoslovakia, Poland, and Romania.

In the Soviet Union the Rusyns were not officially regarded as an ethnicity distinct from Ukrainians.[citation needed] However, the name Ruthenian (or "Little Ruthenian") was still often applied to the Rusyn minorities of Czechoslovakia and Poland.[citation needed]

When commenting on the partition of Czechoslovakia by Nazi Germany in March 1939, US diplomat George Kennan noted, "To those who inquire whether these peasants are Russians or Ukrainians, there is only one answer. They are Neither. They are simply Ruthenians."[15] Dr. Paul R. Magosci emphasizes that modern Ruthenians have "the sense of a nationality distinct from Ukrainians" and often associate Ukrainians with Soviets or Communists.[16]

After the expansion of Soviet Ukraine following World War II, many groups who had not previously considered themselves Ukrainians were merged into the Ukrainian identity[17]

The government of Slovakia has proclaimed Rusyns (Rusíni) to be a distinct national minority (1991) and recognised Rusyn language as a distinct language (1995).[3] 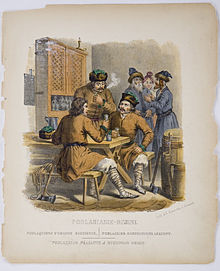 Ruthenians of Podlachia in the second half of the 19th century.

In the Interbellum period of the 20th century, the term rusyn (Ruthenian) was also applied to people from the Kresy Wschodnie (the eastern borderlands) in the Second Polish Republic, and included Ukrainians, Rusins, and Lemkos, or alternatively, members of the Uniate or Greek Catholic Church churches. In Galicia, the Polish government actively replaced all references to "Ukrainians" with the old word rusini ("Ruthenians"), an action that caused many Ukrainians to view their original self-designation with distaste.[18]

The Polish census of 1921 considered Ukrainians no other than Ruthenians.[19] However the Polish census of 1931 counted Belarusian, Ukrainian, Russian, and Ruthenian as separate language categories, and the census results were substantially different from before.[20] According to Rusyn-American historian Paul Robert Magocsi, Polish government policy in the 1930s pursued a strategy of tribalization, regarding various ethnographic groups—i.e., Lemkos, Boikos, and Hutsuls, as well Old Ruthenians and Russophiles—as different from other Ukrainians (although no such category existed in the Polish census apart from the first-language speakers of Russian[20]), and offered instructions in Lemko vernacular in state schools set up in the westernmost Lemko Region.[21]

The designations Rusyn and Carpatho-Rusyn were banned in the Soviet Union by the end of World War II in June 1945.[22] Ruthenians who identified under the Rusyn ethnonym and considered themselves to be a national and linguistic group separate from Ukrainians and Belarusians[16] were relegated to the Carpathian diaspora and formally functioned among the large immigrant communities in the United States.[22] A cross-European revival took place only with the collapse of communist rule in 1989.[22] This has resulted in political conflict and accusations of intrigue against Rusyn activists, including criminal charges. The Rusyn minority is well represented in Slovakia. The single category of people who listed their ethnicity as Rusyn was created in the 1920s, however, no generally accepted standardised Rusyn language existed.[23]

After World War II, following the practice in the Soviet Union, Ruthenian ethnicity was disallowed. This Soviet policy maintained that the Ruthenians and their language were part of the Ukrainian ethnic group and language. At the same time, the Greek Catholic church was banned and replaced with the Eastern Orthodox church under the Russian Patriarch, in an atmosphere which repressed all religions. Thus, in Slovakia, the former Ruthenians were technically free to register as any ethnicity but Ruthenian.[23]