The treaty provided for a large demilitarization of lakes along the international boundary, where many British naval arrangements and forts remained. The treaty stipulated that the United States and British North America could each maintain one military vessel (no more than 100 tons burden) as well as one cannon (no more than eighteen pounds) on Lake Ontario and Lake Champlain. The remaining Great Lakes permitted the United States and British North America to keep two military vessels "of like burden" on the waters armed with "like force". The treaty, and the separate Treaty of 1818, laid the basis for a demilitarized boundary between the U.S. and British North America.[2]

The origins of the Rush–Bagot Treaty can be traced to a correspondence of letters between Acting United States Secretary of State Richard Rush and the British Minister to Washington Sir Charles Bagot, which were exchanged and signed on April 27 and 28, 1817. After the terms of the notes were agreed upon by Rush and Bagot, the Rush–Bagot Agreement was unofficially recognized by both countries. On April 6, 1818, it was submitted to the United States Senate and formally ratified on April 16, 1818. The treaty eventually led to the Treaty of Washington of 1871, which completed disarmament. The United States and Canada agreed in 1946, through an exchange of diplomatic notes, that the stationing of naval vessels for training purposes was permissible provided each government was fully notified in advance.[3]

In 2004, the U.S. Coast Guard decided to arm 11 of its small cutters stationed on Lake Erie and Lake Huron with M240 7.62 mm machine guns. The U.S. decision was based on a climbing number of smuggling operations as well as the increased threat of terrorist activity after the September 11, 2001, attacks. The Canadian government decided that the armament did not violate the treaty, as the guns were to be used for law enforcement rather than military activities. Canada reserved the right to arm its law enforcement vessels with similar weapons.[4]

HMCS Stone Frigate, located at the Royal Military College in Kingston, Ontario, was constructed during 1820 to store part of the dismantled British fleet from the War of 1812, which had been dismantled pursuant to the Rush–Bagot Treaty.[5]

There are still military facilities near or next to the Great Lakes:

The Canada–United States border was demilitarized, including the Great Lakes and Lake Champlain. The U.S. and the British agreed to joint control over the Oregon Territory. The Rush–Bagot Agreement laid the foundation for the world's longest east–west boundary—8,891 kilometres (5,525 mi), and the longest demilitarized border in the world.[6][7]

Although the treaty had caused difficulties during World War I, its terms were not changed. Similar problems occurred before World War II, but Secretary of State Cordell Hull wanted to preserve the agreement because of its historical importance. In 1939 and 1940, Canada and the United States agreed to interpret the treaty so that weapons could be installed in the Great Lakes but could not be operable until the ships left the Lakes. In 1942, the United States, by then having entered the war and allied with Canada, successfully proposed that until the end of the war weapons could be completely installed and tested in the Lakes. After discussions in the Permanent Joint Board on Defense, in 1946, Canada similarly proposed to interpret the agreement as permitting using ships for training purposes if each country notified the other.[8] 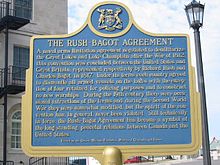 Memorial terrace to the Rush–Bagot Treaty at Old Fort Niagara