From Khartoum, Slatin went through Kordofan[10] to Dar Nuba, exploring the mountains of that region with the German explorer and ornithologist Theodor von Heuglin. He was forced to return to Khartoum when the local Arabs rebelled against the Egyptian government. There Slatin met Dr. Schnitzer, later famous as "Emin Pasha", and with him intended to visit General Charles George Gordon[10] at Lado, Gordon at that time being Governor of the Equatorial Provinces. Slatin, however, was obliged to return to Austria without accomplishing his desire, though Emin did go to Lado and at Slatin's request recommended the young traveller to Gordon for employment in the Sudan.[5][6]
Slatin left Africa in order to serve his conscription order in the Austrian army.[7][11][12][13][14] On 25 September 1876 he joined his unit the 12.Feldjägerbatallon as recruit and one year later he was promoted to a Lieutenant in the reserves of the 19th Infantry Regiment of the Austro-Hungarian Army.[1][5][8]:21

In 1878, while Slatin was serving as a lieutenant in the crown prince Rudolf's regiment in the Bosnian campaign.[7][13][14] he received a letter from Gordon inviting him to the Sudan, where Gordon had become the Governor-General.[1][8]:21[10] At the close of the campaign, Slatin received permission to go to Africa. He started his travel via train and ship[8]:22 on 1 December 1878 and he arrived in Khartoum in January 1879. After a brief period as financial inspector,[8]:28[10] Slatin was appointed Mudir (governor) of Dara, the south-western part of Darfur,[8]:28–29[10][14] a post he held until early in 1881, when he was promoted Governor-General of Darfur and given the rank of bey.

Slatin photographed in Mahdist clothing in 1906.

While administering Dara, Slatin conducted a successful campaign against one of the Darfur princes in revolt, and later, as governor of Darfur.[3] Early in 1882 the Rizeigat tribesmen of Southern Darfur rebelled, led by Sheikh Madibbo ibn Ali, a convert to the cause of the religious leader known as the Mahdi Muhammad Ahmad. Slatin gallantly defended his province and though he fought many successful battles, he gradually lost ground. At Om Waragat he lost 8,000 of his men in the first 20 minutes of the battle and was himself wounded three times but he managed to fight his way back to Dara. Believing his troops attributed their failure in battle to the fact that he was a Christian, Slatin publicly adopted Islam in 1883 and took the Islamic name, Abd al Qadir.[1]

The Mahdists then captured el Obeid, the capital of Kordofan, severing all Slatin's links with Khartoum. When Hicks Pasha's expedition was annihilated at the Battle of Shaykan in 1883, Slatin finally surrendered to his old enemy the Mahdist Emir Madibbo, refusing to make any further sacrifice of life in a hopeless cause. When the Mahdists reached Khartoum, an attempt was made to use him to induce the commander Charles George Gordon, now Governor General of Sudan, to surrender. This failing, Slatin was placed in chains, and on the morning of 26 January 1885, an hour or two after the fall of Khartoum, Gordon's head was brought to the camp and shown to the captive. After the sudden death of the Mahdi the same year, Slatin was kept at Omdurman by his successor, the Khalifa Abdullahi, being treated alternately with savage cruelty and comparative indulgence. During his captivity, he worked as adviser and interpreter for the Khalifa, and was made to serve in his personal retinue of bodyguards.[1] 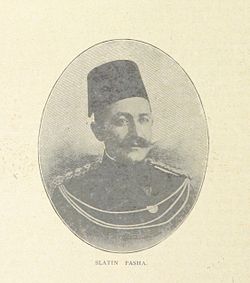 At length, after over eleven years captivity, he was able to escape,[15] with the help of Sir Reginald (then Major) Wingate of the Egyptian Intelligence Department and a local Sheikh of the Ababda tribe[citation needed],[16] in a perilous 1000 km. and three-week journey across the desert, reaching Aswan, Egypt in March 1895.[3] In a remarkable book, Fire and Sword in the Sudan, written in the same year and issued in English and German in 1896, Slatin gave not only a personal narrative of fighting and serving the dervishes but a comprehensive account of the Sudan under the rule of the Khalifa.[7][17] The book, edited by F. R. Wingate, became a bestseller.[4][14] Originally published in English in 1896 entitled "Fire and Sword in the Sudan", it was also published in German in 1896 by the Brockhaus Verlag in Leipzig entitled "Feuer und Schwert im Sudan. Meine Kämpfe mit den Derwischen, meine Gefangenschaft und Flucht.1879–1895."[6][18] His book became an important inspiration for the German author Karl May and his trilogy "Im Lande des Mahdi".[19] He also published another book entitled "Elf Jahre in der Gefangenschaft des Mahdi".[9]

Raised to the rank of Pasha by the Khedive,[1][3][7] Slatin was appointed an honorary Companion of the Order of the Bath by Queen Victoria.[20] In autumn 1895, he was granted an audience with Emperor Franz Joseph I of Austria.[14] Queen Victoria made him an honorary Member (fourth class) of the Royal Victorian Order in 1896.[21]

On the eve of his surrender to the Mahdi at Christmas 1883, he had resolved, if he regained his liberty, to use the knowledge he would acquire while in captivity for the eventual benefit of the country, and after a year's rest he took part, as an officer on the staff of the Egyptian army, in the campaigns of 1897–98 which ended in the capture of Omdurman.[15][17] 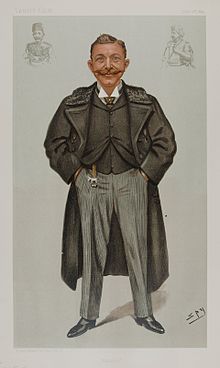 For his services in these campaigns, he was created an honorary Knight Commander of the Order of St Michael and St George by Queen Victoria in 1898[22] and in 1899 was knighted by Franz Joseph I of Austria.[1][12][23] Also in 1899, he was made a brigadier-general in the British Army.[11][12][13] In 1900 he was appointed inspector-general of the Sudan,[1][11][13][24] in which capacity his mastery of Arabic and his profound knowledge of the land and peoples proved invaluable in the work of reconstruction undertaken by the Anglo-Egyptian government in that country.[6] He was a close friend of the governor general, F. R. Wingate, and was free to define his role as inspector-general without much interference from his colleagues and superiors. Never before or since did any official hold the title of inspector-general. He was a frequent guest of Queen Victoria.[6]

In 1906, he was ennobled by Franz Joseph I of Austria.[1][23] He was since styled "Freiherr von Slatin".[9][13] In 1907, he was made an honorary major-general in the British army[25] and in 1909 he was created an honorary Knight Commander of the Royal Victorian Order by King Edward VII of the United Kingdom.[26] His rank in the Austro-Hungarian Army always remained Leutnant d.R.[13][14]

His position as inspector-general of the Sudan terminated in 1914 due to the commencement of hostilities in World War I between Great Britain and Austria-Hungary.[1][15][24]

He received absolution from the Pope for his conversion to Islam, which he had reversed.[5] 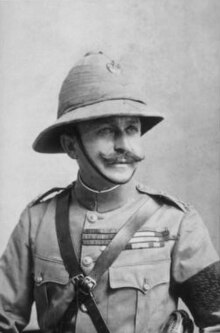 Rudolf Carl von Slatin in the beginning of XX century

During the years he served the British Empire, he became acquainted with Robert Baden-Powell and became his friend.[3][17] So it was not surprising that he was asked to serve within the new founded Austrian Scout organisation. From 1914 to 1918, he was the Honorary Chief Scout of the Österreichischer Pfadfinderbund.[3][30]:278[31] In January 1929 a letter of Rudolf Carl von Slatin is published under the title Ehrenbundesfeldmeister (National Chief Scout) in the Austrian Scout Magazine "Unser Weg".[32]

He was also an honorary member of the Royal Geographical Society.[23]

In 1919, a Scout group of the Österreichischer Pfadfinderbund in Klosterneuburg was named Slatin Pascha.[30]:57

In 1936, a drinking fountain was erected in Khartoum in his memory, but the bronze portrait plaque and dedication were removed in 1956 by the Sudanese government, after Sudan became independent.[13] A Commemorative plaque is placed on his former house in Khartoum.[36]

The Spitzvilla in Upper Austria near Traunkirchen is a memorial site for Rudolf Carl von Slatin. He bought it in 1897 and there entertained many grand persons of his epoch.

At the Austrian National Jamboree in 1961 a Subcamp was named Slatin Pascha.[30]:190

His captivity and escape inspired the comics creators Mino Milani and Sergio Toppi for a comic story with the title "L'Uomo del Nilo" (The man of the Nile) in a series with the title "Un uomo un'avventura" (A man, an adventure) by Sergio Bonelli Editore[51][52]