The name is from rubus for "bramble" and ursinus for "bear." [3] 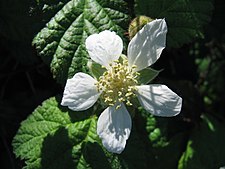 Rubus ursinus is a wide, mounding shrub or vine, growing to 2–5 feet (0.61–1.52 m) high, and more than 6 feet (1.8 m) wide.[6] The prickly branches can take root if they touch soil, thus enabling the plant to spread vegetatively and form larger clonal colonies.

Leaves usually have 3 leaflets but sometimes 5 or only 1, and are deciduous. The plant is dioeocious, with male and female plants on separate plants, also unusual for the genus. As with other Rubus, the canes are typically vegetative the first year, and reproductive in the second.

Flowers are white with narrower petals than most related species, and have a fragrance.[7] The sweet, very aromatic, edible fruits are dark purple, dark red, or black and up to 2 centimeters (0.8 inches) in length.[8]

Current or recent subspecies and varieties include:

Diverse wildlife eat the berries, including songbirds, deer, bear, and other large and small mammals.[6] It is of notable pollinator and nesting material value for native bee and bumble bee species.[6] This blackberry species is a larval food source for the western tiger swallowtail butterfly (Papilio rutulus), the mourning cloak butterfly (Nymphalis antiopa), the gray hairstreak butterfly (Strymon melinus), and the spring azure butterfly (Celastrina ladon).[13]

Native Americans, such as the Kumeyaay, Maidu, Pomo and Salish peoples, used Rubus ursinus as a fresh and dried fruit source and as a traditional medicinal plant.[14] The Concow tribe calls this plant wân-kö-mil′-ē in the Konkow language.[15]

Rubus ursinus is cultivated for its fruit, and also ornamental plant qualities.[3][13] It is planted in home, native plant, and wildlife gardens, and in natural landscaping projects.[6][16] It can be espaliered or trained on fences and trellising.[3] When mature/established, the plant is effective in stabilizing creek banks and edges of bioswales.[13]

To set large fruit, the plant needs consistent amounts of moisture.[16] Otherwise it is moderately drought tolerant when established. Seed size seems to be related to fruit "cell" size, and the smallest (1 cm) fully formed berries are most highly prized. These are sometimes called "little wild blackberries."

A cultivar of this species named the 'Aughinbaugh' blackberry was a parent of the loganberry. Rubus ursinus is also a second generation parent of the boysenberry and the marionberry, or 'Marion' blackberry.[3]

'Wild Treasure' has the fruit size and flavor of the wild species, but without prickles, and the berries are machine harvestable. It was released by the USDA-ARS in 2010, and is a hybrid between a selection of Rubus ursinus and 'Waldo' (another cultivar that is a second generation descendant of the marionberry that has no prickles).