Rubus is a large and diverse genus of flowering plants in the rose family, Rosaceae, subfamily Rosoideae, with 250–700 species.[4]

Raspberries, blackberries, and dewberries are common, widely distributed members of the genus. Most of these plants have woody stems with prickles like roses; spines, bristles, and gland-tipped hairs are also common in the genus. The Rubus fruit, sometimes called a bramble fruit, is an aggregate of drupelets. The term "cane fruit" (or "cane-fruit"), or "cane berry" (or "caneberry"), applies to any Rubus species or hybrid which is commonly grown with supports such as wires or canes, including raspberries, blackberries, and hybrids such as loganberry, boysenberry, marionberry and tayberry.[5] The stems of such plants are also referred to as canes.

Most species are hermaphrodites, Rubus chamaemorus being an exception.

The blackberries, as well as various other Rubus species with mounding or rambling growth habits, are often called brambles. However, this name is not used for those like the raspberry that grow as upright canes, or for trailing or prostrate species, such as most dewberries, or various low-growing boreal, arctic, or alpine species.

The generic name means blackberry in Latin and was derived from the word ruber, meaning "red".[6]

The scientific study of brambles is known as "batology".

Examples of the hundreds of species of Rubus include: 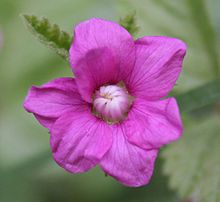 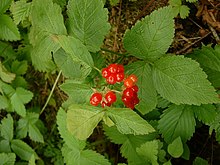 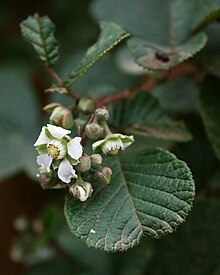 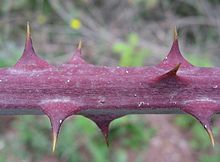 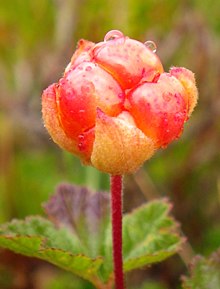 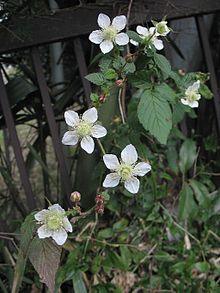 The term "hybrid berry" is often used collectively for those fruits in the genus Rubus which have been developed mainly in the U.S. and U.K. in the last 130 years. As Rubus species readily interbreed and are apomicts (able to set seed without fertilisation), the parentage of these plants is often highly complex, but is generally agreed to include cultivars of blackberries (Rubus ursinus, R. fruticosus) and raspberries (R. idaeus).

The hybrid berries include:-[9] 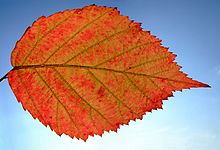 The genus Rubus is a very complex one, particularly the blackberry/dewberry subgenus (Rubus), with polyploidy, hybridization, and facultative apomixis apparently all frequently occurring, making species classification of the great variation in the subgenus one of the grand challenges of systematic botany.

Rubus species have a basic chromosome number of seven. Polyploidy from the diploid (14 chromosomes) to the tetradecaploid (98 chromosomes) is exhibited.

Some treatments have recognized dozens of species each for what other, comparably qualified botanists have considered single, more variable species. On the other hand, species in the other Rubus subgenera (such as the raspberries) are generally distinct, or else involved in more routine one-or-a-few taxonomic debates, such as whether the European and American red raspberries are better treated as one species or two (in this case, the two-species view is followed here, with Rubus idaeus and R. strigosus both recognized; if these species are combined, then the older name R. idaeus has priority for the broader species).

Molecular data have backed up classifications based on geography and chromosome number, but following morphological data, such as the structure of the leaves and stems, do not appear to produce a phylogenetic classification.[10]

The classification presented below[citation needed] recognizes 13 subgenera within Rubus, with the largest subgenus (Rubus) in turn divided into 12 sections. Representative examples are presented, but many more species are not mentioned here. A comprehensive 2019 study found subgenera Orobatus and Anoplobatus to be monophyletic, while all other subgenera to be paraphyletic or polyphyletic.[11] 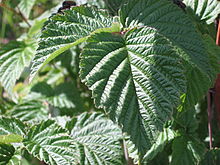 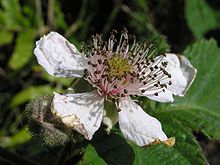 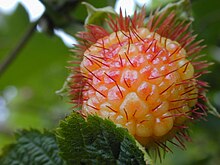 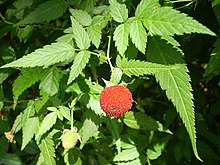 The genus has a likely North American origin, with the oldest fossils known from the Eocene, and expansion into Eurasia and elsewhere during the Miocene.[11] Fossil seeds from the early Miocene of Rubus have been found in the Czech part of the Zittau Basin. [12] Many fossil fruits of †Rubus laticostatus, †Rubus microspermus and †Rubus semirotundatus have been extracted from bore hole samples of the Middle Miocene fresh water deposits in Nowy Sacz Basin, West Carpathians, Poland.[13]