The Royal Swedish Academy of Sciences (Swedish: Kungliga Vetenskapsakademien) is one of the royal academies of Sweden. Founded on June 2, 1739, it is an independent, non-governmental scientific organization which takes special responsibility for promoting the natural sciences and mathematics and strengthen their influence in society, whilst endeavouring to promote the exchange of ideas between various disciplines.

The goals of the academy are:

Every year the academy awards the Nobel Prizes in physics and in chemistry, the Bank of Sweden's economics prize in Alfred Nobel's memory, the Crafoord Prize, the Sjöberg Prize and a number of other major awards. The Academy maintains close relations with foreign academies, learned societies and international scientific organizations and also promotes international scientific cooperation. The Academy of Sciences is located within the Stockholm region's Royal National City Park. 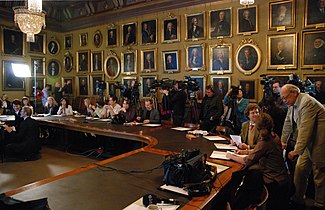 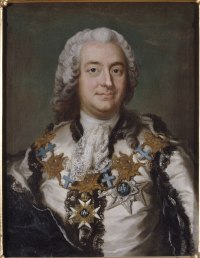 The following persons have served as permanent secretaries of the academy: 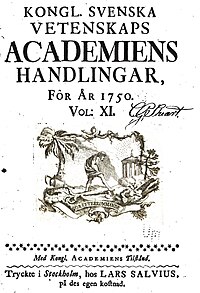 The transactions of the Academy (Vetenskapsakademiens handlingar) were published as its main series between 1739 and 1974. In parallel, other major series have appeared and gone:

The academy started publishing annual reports in physics and chemistry (1826), technology (1827), botany (1831), and zoology (1832). These lasted into the 1860s, when they were replaced by the single Bihang series (meaning: supplement to the transactions). Starting in 1887, this series was once again split into four sections (afdelning), which in 1903 became independent scientific journals of their own, titled "Arkiv för..." (archive for...), among them

Further restructuring of their topics occurred in 1949 and 1974. Other defunct journals of the Academy include:

The purpose of the academy was to focus on practically useful knowledge, and to publish in Swedish in order to widely disseminate the academy's findings. The academy was intended to be different from the Royal Society of Sciences in Uppsala, which had been founded in 1719 and published in Latin. The location close to the commercial activities in Sweden's capital (which unlike Uppsala did not have a university at this time) was also intentional. The academy was modeled after the Royal Society of London and Academie Royale des Sciences in Paris, France, which some of the founding members were familiar with.