The Royal Saskatchewan Museum (RSM) is a Canadian natural history museum in Regina, Saskatchewan. It was established in 1906 as the Provincial Museum after Charles Noddings found a large boulder with a carved face on it in the Beaver Hills area on December 25, 1905. When Noddings donated it to the Province of Saskatchewan, the stimulus for a provincial museum was born.[2] The first museum in Saskatchewan, and the first provincial museum in the three Prairie Provinces, the institution was formed to secure and preserve natural history specimens and objects of historical and ethnological interest.[3] This museum received royal patronage from Queen Elizabeth II, and was renamed the Royal Saskatchewan Museum in 1993.

Between 1906 and 1945 the Museum occupied several premises including the Regina Trading Company Building, the Provincial Legislative Building, and the Normal School (the eastern-most historic building on the "College Avenue" campus of the University of Regina). During the Second World War the Museum's collections were taken out of public display and stored initially in the General Motors Building (east on Dewdney Avenue) to permit the Normal School to be used for the Commonwealth Air Training Plan, and then, when the GM building was also requisitioned, in Pilkington's Glass Company Building. The collections returned to the Normal School in 1944 and opened to the public again in 1946.

In 1953, the provincial government began construction of the current museum building on the corner of Albert Street and College Avenue, the site of the abandoned Chateau Qu'Appelle Hotel, as a Saskatchewan Golden Jubilee project. Partly for aesthetic reasons and partly to avoid the expansive task of uprooting the pilings, the museum was built on an angle with a large front lawn.[4] The new premises were opened by Governor General Vincent Massey on May 16, 1955. To reflect the areas of devotion, the museum adopted the name Saskatchewan Museum of Natural History. This name remained until 1993 when they received royal designation from Queen Elizabeth II, Queen of Canada and became the Royal Saskatchewan Museum.

The Museum collection, then housed in the Provincial Legislative Building, was decimated by the 1912 Regina Cyclone. The collection was severely damaged again in 1990 when fire broke out in the First Nations Gallery, which was then under construction. Smoke damage required the museum to close for four months. Since then, the museum has undergone significant revitalization with the development of the First Nations Gallery, Life Sciences Gallery, acquisition of the T.rex Discovery Centre and the renovation of the Earth Sciences Gallery.[5][6] 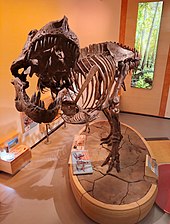 From how the formation of the Earth provided Saskatchewan with rich mineral resources, to giant reptiles, dinosaurs and other extinct creatures that have lived in Saskatchewan during the past two billion years, the Earth Science Gallery describes Saskatchewan's fascinating ancient history and geological resources.[7]

On May 17, 2019 a life-size cast of Scotty, the world's largest T. rex[8] went on display in the two-story CN T.rex Gallery, a gallery within the museum's Earth Science gallery. Originally discovered by Royal Saskatchewan Museum research team in Saskatchewan's Frenchman River Valley on August 16, 1991, specimen [RSM P2523.8] is now on display in two locations in Saskatchewan, Regina and Eastend. The gallery highlights Scotty's injuries accumulated over its lifetime, and showcases the flora and fauna that lived alongside the T. rex.[9]

Opened on June 26, 1993, this gallery was a collaborative effort between researchers, Indigenous Elders, students and community members. Showcasing miniature and life-size dioramas, the gallery examines the culture, traditions, trade, treaties and communities of Saskatchewan's Indigenous people over the past 10,000 years.[10][11]

An exhibit at the museum's Life Science gallery.

Sixteen detailed life-size dioramas Illustrates the ecoregions and seasons of Saskatchewan. Opened on June, 2001 the gallery describes how different life forms are interconnected.[12] In a celebration of Saskatchewan's landscapes and biodiversity, visitors can see what it's like inside a bear's den, a beaver's lodge or a snakes hibernaculum.[13][14]

Exterior of the T.rex Discovery Centre, a museum in Eastend, Saskatchewan operated by RSM.

On February 14, 2013 the Royal Saskatchewan Museum assumed operations of the T.rex Discovery Centre.[16][17] Located in Eastend, Saskatchewan, the centre houses a number of fossils from the Cretaceous and Cenozoic periods.

The T.rex Discovery Centre was established as a facility to house the fossil record of southwest Saskatchewan. The Town of Eastend, through a series of public meetings identified a need for a palaeontological centre to showcase the rich fossil record of the Frenchman River Valley and the Cypress Hills. The T.rex Discovery Centre opened in 2001 in the Frenchman River Valley, about 25 kilometres (16 mi) southeast of Eastend.

The museum is affiliated with the Canadian Museums Association, the Canadian Heritage Information Network, and the Virtual Museum of Canada.