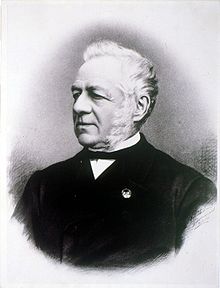 The primary tasks of KNMI are weather forecasting, monitoring of climate changes and monitoring seismic activity. KNMI is also the national research and information centre for climate, climate change and seismology.

KNMI was established by royal decree of King William III on 21 January 1854 under the title "Royal Meteorological Observatory". Professor C. H. D. Buys Ballot was appointed as the first Director.[1] The year before Professor Ballot had moved the Utrecht University Observatory to the decomissioned fort at Sonnenborgh. It was only later, in 1897, that the headquarters of the KNMI moved to the Koelenberg estate in De Bilt.

Like Robert FitzRoy who founded the Meteorological Office in Britain the same year, Ballot was disenchanted with the non-scientific weather reports found in European newspapers at the time. Like the Met Office, the KNMI also pioneered daily weather predictions, which he called by a new combination "weervoorspelling" (weather prognostication).

Applied research at KNMI is focused on three areas:[2]

Whenever a disaster occurs within Europe which causes the emission of toxic gases or radioactive material into the atmosphere, it is of utmost importance to quickly determine where the atmospheric plume of toxic material is being transported by the prevailing winds and other meteorological factors. At such times, KNMI activates a special calamity service. For this purpose, a group of seven meteorologists is constantly on call day or night. KNMI's role in supplying information during emergencies is included in municipal and provincial disaster management plans. Civil services, fire departments and the police can be provided with weather and other relevant information directly by the meteorologist on duty, through dedicated telephone connections.

KNMI has available two atmospheric dispersion models for use by their calamity service: