Roland "Roy" McMurtry, OC OOnt (born May 31, 1932) is a lawyer, politician, and former judge in Ontario, Canada. He was a Progressive Conservative member of the Legislative Assembly of Ontario from 1975 to 1985. He served in the cabinet of Bill Davis as Attorney General and Solicitor General. After leaving politics he served as High Commissioner of Canada to the United Kingdom between 1985 and 1988. McMurtry later became Chief Justice of Ontario.

McMurtry was born in Toronto, son of lawyer Roy McMurtry, and educated at St. Andrew's College, graduating in 1950. He received a Bachelor of Arts degree from the University of Toronto, Trinity College in 1954, and a Bachelor of Laws degree from Osgoode Hall Law School in 1958. While attending university, he was admitted to the Zeta Psi fraternity and became a close friend of future Premier of Ontario William Davis, his Canadian football teammate. While studying he was hired to teach football at Upper Canada College. He also taught in adult literacy classes at Frontier College, working through the day on construction projects and teaching at night. He was a trial lawyer for seventeen years before entering politics. He also wrote a weekly column in the Toronto Sun in the early seventies.

In the 1960s, he worked with Dalton Camp and Norman Atkins to remove John Diefenbaker as leader of the Progressive Conservative Party of Canada.

McMurtry suffered a back injury during the 1971 Ontario Progressive Conservative leadership convention, and was able to exempt himself from choosing between Davis and rival candidate Allan Lawrence, whose campaign was managed by Atkins. Davis defeated Lawrence by 44 votes on the final ballot. A few weeks later, McMurtry organized a meeting which brought together the Davis and Lawrence leadership teams. The resulting alliance, known as the Big Blue Machine, dominated the Progressive Conservative Party into the 1980s.

Allan Lawrence resigned his St. George constituency in late 1972 to move to federal politics, and McMurtry was recruited by Davis as the Progressive Conservative candidate for a March 1973 by-election. He was unexpectedly defeated by Liberal Party candidate Margaret Campbell, a well-known municipal politician. He was first elected to the Legislative Assembly of Ontario two years later, in the 1975 provincial election, defeating Liberal candidate Frank Judge in the Eglinton constituency.

Davis won a minority government in the 1975 election, and McMurtry was immediately appointed to cabinet as Attorney-General. He held this position until 1985 and also served as Solicitor-General from 1978 to 1982. He introduced a large number of law reform bills, and was largely responsible for family law reform in Ontario. In 1978, he took the first steps to make Ontario's legal system bilingual and to start the process of translating Ontario's statutes into French. He was a major advocate for human rights and improved race relations. 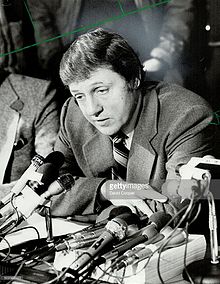 McMurtry was also the provincial minister responsible for emergency planning. During the 1979 Mississauga train derailment, he largely deferred to Mayor Hazel McCallion who was the public face of the crisis handling.[1]

McMurtry was a Red Tory,[2] and was one of Davis's closest advisers in government. As Attorney-General, he had been a primary negotiator for Ontario in the Trudeau era constitutional negotiations. He appeared as counsel for Ontario in the Patriation Reference before the Supreme Court of Canada. In November 1981, he played a major role in brokering the deal that achieved patriation of the Canadian Constitution and the creation of the Charter of Rights and Freedoms. A late night "kitchen accord" between McMurtry, Jean Chrétien and Roy Romanow on 6 November 1981 broke a deadlock in negotiations, and resulted in the governments of all provinces except Quebec agreeing to the proposed reforms to the Constitution, which came into law the following year.

One of McMurtry's lowest points was his role in the prosecution of nurse Susan Nelles, who was charged with the murder of a number of infants at the Hospital for Sick Children in Toronto. The charges were dropped following a preliminary hearing and Nelles was exonerated by the Grange Commission, a royal commission called upon to examine the deaths. McMurtry was criticized for his Ministry's role in her wrongful prosecution. In a 2007 interview, McMurtry, looking back at the incident, said "I can remember that I had been away with my family on a school break, when I came back and saw the headlines, I brought in my deputy attorney-general, and said: 'What the hell is going on here? You've had a nurse arrested at one of the world's most famous hospitals?' " McMurtry said that local prosecutors failed to consult the ministry before consenting to the charges and that examining the case McMurtry had doubts that Nelles had exclusive access to all of the children.[3]

He was also Attorney-General at the time of the 1981 Toronto bathhouse raids which were widely denounced as one of the most socially regressive acts in the province's history.[3] At the time it was widely believed that the raids were approved by McMurtry. In a 2007 interview, however, McMurtry said that this was not the case. "The irony of the whole thing was that I had expressed my concern to the chief of police; that it really looked like we were dissolving into a police state. The whole thing looked terrible. Without a doubt, that was one of my most frustrating experiences," said McMurtry.[3]

When Davis resigned as Progressive Conservative leader and premier in 1985, McMurtry sought the party's leadership at the party's January 1985 leadership convention. He started as the underdog in the campaign, but impressed many delegates through his performance in candidates' debates and polling data showing him as the preferred choice of Ontario voters. During the contest, McMurtry was sometimes criticized for remaining too long in one portfolio. While his opponents all had diverse ministerial experience, McMurtry's expertise was focused more narrowly on matters of the law. His supporters included Robert Elgie, Frank Drea, Reuben Baetz and Bob MacQuarrie.

McMurtry won a total of 300 votes on the first ballot, considerably more than he had been expected to win. It was not sufficient, however, to place better than fourth in a field of four, after Frank Miller, Dennis Timbrell and Larry Grossman. He was eliminated from the contest and gave his support to Grossman, a fellow Red Tory.

McMurtry's support was enough to move Grossman into second place on the second ballot, ahead of the more centrist Timbrell. Timbrell's delegates were divided on the last ballot, which allowed the conservative Miller to win the convention. Miller gave McMurtry the option of remaining as Attorney General in the new government, but he declined and announced his retirement from politics.

On February 4, 1985, Canadian External Affairs Minister Joe Clark announced that McMurtry had been appointed to succeed Donald Jamieson as Canada's High Commissioner to the United Kingdom. He served in this capacity until 1988. Upon his return to Canada, he resumed his law practice and served from 1989 to 1990 chairman and Chief Executive Officer of the Canadian Football League.

He was appointed Associate Chief Justice of the Superior Court (Trial Division) in Ontario in 1991, and became Chief Justice of that court in 1994. He became Chief Justice of Ontario in 1996, heading the entire court system in the province, and leading the Court of Appeal for Ontario. That court gained a degree of public attention in 2003 when it ruled in Halpern v. Canada (Attorney General) that provisions of the Canadian Charter of Rights and Freedoms guaranteeing equality under the law require the Province of Ontario to issue marriage licences to same-sex couples. For this, The Globe and Mail named McMurtry and his fellow judges the "Nation Builders of 2003."[2]

In the weeks prior to his retirement in 2007, McMurtry was widely praised as being a unifying force and consensus-builder during his tenure as Chief Justice. "Under Chief Justice McMurtry's leadership, we pulled together and we worked hard, and the chief justice reached out to the bar and he sought their support, and he got it," said Court of Appeal (and future Supreme Court Judge Michael Moldaver in a speech. "Thanks to his courage, leadership and vision, we now have an appeal process that is capable of delivering quality justice in a timely and efficient manner."[3]

"I don't want to paint him as the Next Coming, but he has been a great uniter," said Clifford Lax, a veteran Toronto civil litigator. "He is a really very nice person who is able to find common ground. In a quiet, unassuming way, he has won a lot of converts to what he has done."[3]

During his term McMurtry also acted as the Mayor of Toronto's race relations commissioner, and helped create Pro Bono Ontario which helps provide free legal services to the poor and encourages lawyers to provide pro bono services. He has also been involved with the Ontario Justice Education Network, a program which educates youth at risk about the justice system.[3]

McMurtry is credited with helping transform a backlogged and sometimes fractious court into a highly efficient, harmonious body.[3]

McMurtry returned to the practice of law after retiring from the bench. He was a member of the firm Gowling Lafleur Henderson LLP until August 2014 when he moved to Hull & Hull LLP.[4] McMurtry is a member of Pro Bono Law Ontario's Advisory Board.[5] As of 2019[update] McMurtry is president of the Osgoode Society for Canadian Legal History made several oral histories and co-published two of his books:[6]

Roy McMurtry is married to Ria Jean Macrae with whom he has six children, and 12 grandchildren. His eldest son, Jim McMurtry ran as a Liberal in British Columbia in the 2006 federal election, placing second to Conservative Russ Hiebert.

McMurtry is a landscape painter, originally taught by A.J. Casson and has donated pieces to charity auctions.

In 2007, he was awarded the Order of Ontario.[7] In 2009, he was made an Officer of the Order of Canada "for his distinguished career of public service, notably as chief justice of Ontario, and for his extensive volunteer involvement in many social and multicultural initiatives".[8] In 2013, he was awarded the G. Arthur Martin medal for outstanding contribution to criminal justice.[9]

The headquarters of the Attorney General of Ontario, McMurtry-Scott Building, is named in honour of McMurtry and Ian Scott (former AG 1985-1990).