Lapland (Finland) Finland Hungary
This article is about the city. For the soccer team known as Rovaniemi, see Rovaniemen Palloseura.
Municipality in Lapland, Finland

listen)) is a city and municipality of Finland. It is the administrative capital and commercial centre of Finland's northernmost province, Lapland. It is situated about 6 kilometres (4 miles) south of the Arctic Circle and is between the hills of Ounasvaara and Korkalovaara, at the confluence of the river Kemijoki and its tributary, the Ounasjoki.

The city and the surrounding Rovaniemen maalaiskunta (Rural municipality of Rovaniemi) were consolidated into a single entity on 1 January 2006. The resulting city of Rovaniemi is considered the largest city in all of Europe by land area, because the defined limits of the city proper extend far beyond the actual urban area.[6]

The rova part in the name Rovaniemi has often been considered to be of Sámi origin, as roavve in Sámi denotes a forested ridge or hill or the site of an old forest fire. In Southern Sami dialects, however, rova means a heap of stones, a rock or a group of rocks in a stretch of rapids or even a sauna stove.[citation needed] The niemi part of the name means "cape".

Periodic clearance of new land for agriculture and the practise of slash-and-burn cultivation began around 750–530 BC. Artifacts found in the area suggest that an increasing number of travellers from Karelia in the east, Häme in the south and the Arctic Ocean coast in the north must have come there from 500 AD onwards. The Sami are considered to be Lapland's most indigenous existing population.

It is first mentioned by name in official documents in 1453, existing effectively as a set of small villages whose inhabitants earned their living mainly in agriculture and animal husbandry—with fishing and hunting the most important offshoots.[citation needed]

The exploitation of Lapland's natural resources in the 1800s boosted Rovaniemi's growth. Extensive logging sites and gold fever attracted thousands of people to Lapland. As the mining of natural resources was increased, Rovaniemi became the business centre of the province of Lapland.

During the Second World War, Finland signed the Moscow Armistice and found itself involved in the Lapland War with its former German ally. Retreating German forces utilised scorched earth tactics, and though initially German General Lothar Rendulic ordered only the public buildings in Rovaniemi to be destroyed, on 13 October 1944 the German army received orders to destroy all the buildings in Rovaniemi, only excluding hospitals and houses where inhabitants were present.[7]

While the German rearguard was going about the destruction, an ammunition train in Rovaniemi station exploded and set fire to the wooden houses of the town. The German troops suffered many casualties, mainly from glass splinters. A Finnish commando unit claimed to have blown up the ammunition train and may well have been the primary cause of the town's ruin. The cause was then unknown and generally assumed to be the deliberate intent of Rendulic.[citation needed] During these hostilities 90% of all the buildings in Rovaniemi were destroyed.[8] There is a German cemetery 19 km from Rovaniemi where soldiers killed fighting in Lapland during the war are buried.

Although there has been continuous human settlement in the Rovaniemi area since at least the Stone Age, few of the buildings date back before 1944 since most of the city was destroyed during WWII. When the city was rebuilt, it was designed with input by famous Finnish architect Alvar Aalto, who planned the city's footprint in the shape of a reindeer's head, with the city roads forming the antlers, and the local sports stadium as the reindeer's eye.[9]

Since Rovaniemi is the capital of the region of Lapland, many government institutions have their offices there. About 10,000 of the inhabitants are students. Rovaniemi is home to not only the University of Lapland but also the Lapland University of Applied Sciences (formerly known as the Rovaniemi Polytechnic), which comprises institutes of information and traditional technology, business, health and social care, culinary studies, forestry, rural studies, and sports. Local newspapers include the Lapin Kansa, Uusi Rovaniemi and Lappilainen.

Rovaniemi's most prominent landmarks include the Jätkänkynttilä bridge with its eternal flame over the Kemijoki river, the Arktikum Science Museum which rises out of the bank of the Ounasjoki river, the Rovaniemi Town Hall, the Lappia House (which serves as a theatre, concert hall, and congress centre), and the library.

The last three mentioned buildings are designed by the famous Finnish architect Alvar Aalto. The Arktikum Science Museum is a comprehensive museum of Finland's, and the world's, Arctic regions.

Because of the unspoiled nature of the area and numerous recreational opportunities, tourism is an important industry in Rovaniemi. The city has a number of hotels and restaurants located both in the centre and on the outskirts of the town, hosting over 481,000 visitors in 2013.[10]

Rovaniemi is also considered by Finns to be the official home town of Santa Claus.[11][12][13] It is home to the Santa Claus Village at the Arctic Circle and SantaPark Arctic World, which is located 8 km (5 mi) north of the centre.

Directly across the river from the town is the Ounasvaara ski centre. The top of the Ounasvaara hill bears the site of some of the earliest known human settlements in the area.

A phenomenon also attracting numerous tourists is the Aurora Borealis or Northern Lights. In Finnish Lapland, the number of auroral displays can be as high as 200 a year whereas in southern Finland the number is usually fewer than 20. 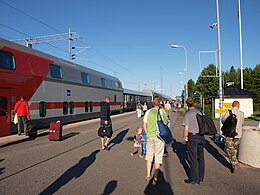 Due to its location near the Arctic Circle, Rovaniemi has a subarctic climate (Köppen Dfc) with short, pleasant summers, while the winters are long, cold and snowy. The city lies just south of the 0 °C (32 °F) mean annual isotherm, but freezing in the soil is very limited even during the winter due to typical heavy snow cover. Its extreme northerly location combined with frequent overcast skies leads to very low levels of sunshine in the winter months; December averages just under six minutes of sunshine daily.

Winters are somewhat modified by marine air from the North Atlantic Current that ensures average temperatures are less extreme than expected for an inland area at such a northerly latitude. On 26 April 2019, Rovaniemi recorded its warmest April day on record with 19 °C (66 °F).[14] 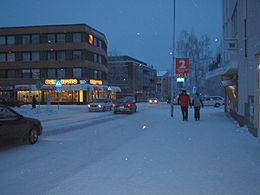 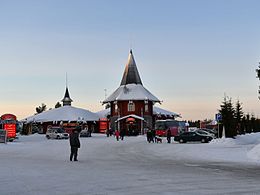 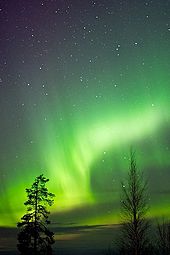 Despite the fact that Rovaniemi experiences polar day between 7 June and 6 July (30 days) it does not experience polar night. However, the sun barely gets above the horizon in the winter.[21]

Rovaniemi is twinned with:[22]

Rovaniemi appears in the video game Tom Clancy's EndWar as a possible battlefield. In the game, Rovaniemi houses military facilities critical to a missile shield for a European Federation.[23]

Rovaniemi is a central scene in a documentary film Reindeerspotting.

TV-Star Bam Margera and his friends travelled to Rovaniemi in their film Bam Margera Presents: Where the ♯$&% Is Santa? in order to find Santa Claus who is assumed to live in Rovaniemi.

A version of the music video for Lordi's song "Hard Rock Hallelujah" was filmed near Rovaniemi.[24]

The video for the Nightwish single "The Islander" was filmed in Rovaniemi by Stobe Harju.

Rovaniemi used to have the northernmost location of any McDonald's in the world[25] until the opening of a McDonald's in Murmansk in 2013, 23 years after it first opened in that country.[26]

Rovaniemi appears as one location of Gavin Lyall's 1963 book The Most Dangerous Game , a spy-thriller set in Lapland and the northern USSR.

The city is home to the football clubs Rovaniemen Palloseura, or RoPS, part of the Veikkausliiga, the Finnish premier division, and FC Santa Claus, part of the third division; to the ice hockey team Rovaniemen Kiekko, or RoKi, whose home arena is Lappi Areena and which currently competes on Mestis, the second-highest league in Finland; and to the volleyball team called Team Lakkapää (formerly Rovaniemen Santasport and Perungan Pojat), which plays in the Finland Volleyball League and won the national championship in 2003, 2007, 2008 and 2011.