Rouyn-Noranda (2011 population 41,012) is a city on Osisko Lake in the Abitibi-Témiscamingue region of Quebec, Canada.

The city of Rouyn-Noranda is a coextensive with a territory equivalent to a regional county municipality (TE) and census division (CD) of Quebec of the same name. Their geographical code is 86.

The city of Rouyn (named for Jean-Baptiste Rouyn, a captain in the Régiment Royal Roussillon of Louis-Joseph de Montcalm)[6] appeared after copper was discovered in 1917. Noranda (a contraction of "North Canada") was created later around the Horne mine and foundry. Both were officially constituted as cities in 1926, then merged in 1986.

The population tends to increase or decrease dramatically depending on the economic situation. The city's population dropped by 5 per cent between the 1996 and 2001 census, before increasing slightly by 0.8 per cent for the 2006 census. This more closely parallels the demographic patterns of Northern Ontario than those of Quebec during this period. Rouyn-Noranda also has other cultural affiliations with Northern Ontario, being the only municipality in Quebec that holds a membership in the Francophone Association of Municipalities of Ontario.

The Roman Catholic diocese of Rouyn-Noranda was established on February 9, 1974, by Pope Paul VI, with Mgr. Jean-Guy Hamelin as its first bishop. It is part of the Metropolitan Province of Gatineau. Mgr. Dorylas Moreau was appointed as bishop on November 30, 2001, replacing Mgr. Hamelin. On September 15, 2003, a decree moved the cathedral from Saint-Michel-Archange Church to Saint-Joseph Church.

As part of the 2000–2006 municipal reorganization in Quebec, on January 1, 2002 the municipalities (including unorganized territories) of the former Rouyn-Noranda Regional County Municipality amalgamated into the new City of Rouyn-Noranda. These were: Arntfield, Bellecombe, Beaudry, Cadillac, Cléricy, Cloutier, D'Alembert, Destor, Évain, Lac-Montanier, Lac-Surimau, McWatters, Mont-Brun, Montbeillard, Rapides-des-Cèdres, Rollet, and the former Rouyn-Noranda.

The city has around 96% French speakers.

Federally, Rouyn-Noranda is part of the Abitibi—Témiscamingue riding. The MP is Christine Moore of the New Democratic Party.

Provincially, Rouyn-Noranda is part of the Rouyn-Noranda–Témiscamingue riding. The MNA is Émilise Lessard-Therrien of Québec solidaire.

The city's mayor is Diane Dallaire.

Rouyn-Noranda is also a territory equivalent to a regional county municipality (TE) and census division (CD) of Quebec, coextensive with the city of Rouyn-Noranda. Its geographical code is 86.

Rouyn-Noranda is the seat of the judicial district of the same name.[12]

The Rouyn-Noranda Huskies have played in the Quebec Major Junior Hockey League since the Saint-Hyacinthe Laser relocated to the town in 1996. Rouyn-Noranda has produced a large number of NHLers for its size including former NHL stars Pierre Turgeon, Stephane Matteau, Sylvain Turgeon, Dale Tallon, Pit Martin, Jacques Laperrière, Jacques Cloutier, Dave Keon and Kent Douglas, the last two both members of the 1967 Stanley Cup Champion Toronto Maple Leafs. Former NHL players Réjean Houle, Éric Desjardins and the Bordeleau Brothers (Christian, Jean Paul and Paulin) also hail from the city. Rouyn-Noranda native Marc-André Cliche played in his first NHL game in 2010. Their most fierce rivals are the Val-d'Or Foreurs, which constitute the "Battle of the 117" since both cities are connected by Route 117.

Propair has its headquarters on the property of Rouyn-Noranda Airport.[14]

Glencore Copper Canada currently operates the Horne smelter. The smelter is the world's largest processor of electronic scrap containing copper and precious metals. It opened in 1927 at the site of the Horne copper mine. The mine was closed in 1976, but the smelter remained in production.[15]

Université du Québec en Abitibi-Témiscamingue is based in Rouyn-Noranda, with campuses elsewhere.

A street corner in Downtown Rouyn-Noranda. 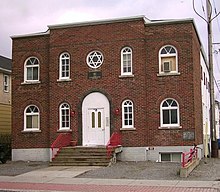 Rouyn-Noranda is known as "La Capitale Nationale du Cuivre" (or the National Copper Capital) for its extensive copper deposits and mining/smelting activities.

The city is served by the Rouyn-Noranda Airport and has a small public transit system of four bus routes serving the urban area.

The primary highways through the city are the north–south Route 101 and the east–west Route 117, which is part of the Trans-Canada Highway system.

Almost all media in Rouyn-Noranda and the nearby city of Val-d'Or serves both cities. Although the cities are far enough apart that radio and television stations in the area serve the cities from separate transmitters, almost every broadcast station in either city has a rebroadcaster in the other city. The only nominal exceptions are the cities' separate NRJ stations, although at present even these stations share the majority of their broadcast schedule.

This Russian Orthodox church, with its traditional architecture, was erected between 1955 and 1957 by the Russian community, at the time about twenty families. A guided tour explains the celebration of Mass and the history of immigrant communities and their role in local history. This distinctive church paints a vivid picture of the lives of the people who suffered through the First and Second World Wars and finally came to live in Canada. Discover the cultural wealth and special characteristics of Rouyn-Noranda, Quebec's second-most cosmopolitan city after Montreal in the 1930s.