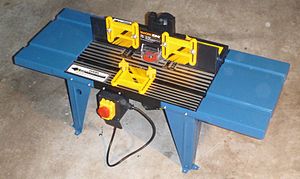 A router table is a stationary woodworking machine in which a vertically oriented spindle of a woodworking router protrudes from the machine table and can be spun at speeds typically between 3000 and 24,000 rpm. Cutter heads (router bits) may be mounted in the spindle chuck. As the workpiece is fed into the machine, the cutters mold a profile into it. The machine normally features a vertical fence, against which the workpiece is guided to control the horizontal depth of cut. Router tables are used to increase the versatility of a hand-held router, as each method of use is particularly suited to specific application, e.g. very large workpieces would be too large to support on a router table and must be routed with a hand-held machine, very small workpieces would not support a hand-held router and must be routed on a router table with the aid of pushtool accessories etc.[1]

Router tables are used in one of three ways. In all cases, an accessory is used to direct the workpiece.

Router tables evolved as shop improvised tools. Individual woodworkers began taking routers, mounting them in an inverted position beneath a table, and using the routers' depth adjustment to raise the bit through a hole in the table surface.

Finally, manufacturers began selling complete packages, such as the Inverted Pin Router, which put them in the business of effectively selling wood shapers, the very tool that shop improvised router tables were created as inexpensive substitutes for.