Route 1 or the Ring Road (Icelandic: Þjóðvegur 1 or Hringvegur) is a national road in Iceland that runs around the island and connects most of the inhabited parts of the country. The total length of the road is 1,322 kilometres (821 mi). Some of the most popular tourist attractions in Iceland, such as the Seljalandsfoss and Skógafoss waterfalls, Dyrhólaey and the Jökulsárlón glacier lagoon, are easily accessible from the Ring Road. The road was completed in 1974, coinciding with the 1,100th anniversary of the country's settlement[2] when the longest bridge in Iceland,[3] crossing the Skeiðará river in the southeast, was opened.

For almost all its length, the road is two lanes wide: one lane going in each direction. Where it passes through larger towns, the number of lanes may be increased, as it also is in the Hvalfjörður Tunnel. Many smaller bridges are single lane, especially in eastern Iceland, and are constructed of wood or steel. The road is paved with asphalt for all of its length.[4] The Iceland Road Administration, Vegagerðin, oversees the maintenance and building of both main roads and minor roads.

Small portions of the road may contain potential hazards such as blind curves and blind summits, single-lane bridges or narrow passes, although many recent road construction projects have reduced hazardous sections considerably. As of 2019, the road is now fully paved. In winter, icy roads and strong winds, 15 m/s for cars with trailers, 25 m/s for cars without trailers, can make travel hazardous.[citation needed] The maximum speed on most of the road is 90 kilometres per hour (56 mph), though this may be lowered to 70 kilometres per hour (43 mph) in tunnels and 50 kilometres per hour (31 mph) through most urban areas.

With adequate snow removal, most of Route 1 is kept open over the winter, but some parts are temporarily closed. Most notably, this used to affect the route between Breiðdalsvík and Egilsstaðir (over the Breiðdalsheiði plateau) in the east; although it was open in spring, summer and autumn.[5] Instead, travelers used the somewhat sinuous coastal route via Reyðarfjörður, using (now former) Routes 96 and 92 to travel between the towns. That coastal route became officially part of Route 1 starting in November 2017, replacing the Breiðdalsheiði route, which is now numbered as Route 95.[6]

Route 1 crosses a few glacial plains, such as Skeiðarársandur, which made the original road construction difficult. In addition, the Skeiðarársandur plain is subject to frequent glacial floods during or after eruptions on the nearby Grímsvötn volcano. Bridges and other stretches of road over the plain have had to be rebuilt as a result.

Traffic levels on the road vary considerably between locations: in and near Reykjavík around 10,000–20,000 vehicles use the road daily, but the stretches farthest away from larger towns see an average of fewer than 100 vehicles per day. The Ring Road is popular with tourists since it covers most of the country and many sights of interest are located near to the route. It has long been a popular tour with Icelandic families going on summer vacation, but in recent years the route is becoming more popular with foreign tourists who either rent a car or bring their own on the ferry to Seyðisfjörður.

The route goes by many names depending on its location. The following table shows road names (excluding tunnels) in a clockwise direction from Reykjavík. 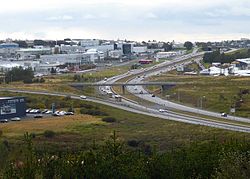 The intersection of Suðurlandsvegur (left) and Vesturlandvegur (lower right) in Reykjavík. The latter continues more than 2 km to the west (far side), before merging with route 49.

Route 1 includes a number of bridges and a few tunnels. The most notable are:

Travelling clockwise (initially northward) from Reykjavík, the following communities and settlements are located on Route 1.

During the 2016 summer solstice, the Icelandic band Sigur Rós filmed and broadcast a live Slow TV event tour of Iceland driving along the entire route. The event was broadcast live in 360-degree video with a soundtrack of constantly evolving music based around elements of their track Óveður.[7]