Rosemont–La Petite-Patrie is a borough (arrondissement) in the city of Montreal, Quebec, Canada. It is located in the centre-east of the city. 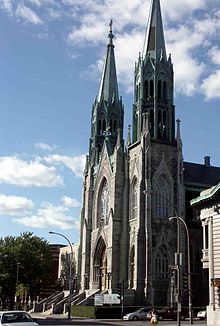 The borough is bordered to the northwest by Villeray–Saint-Michel–Parc-Extension, to the northeast by Saint Leonard, to the southeast by Mercier—Hochelaga-Maisonneuve, to the southwest by Le Plateau-Mont-Royal and its Mile End neighbourhood, and to the west by Outremont.

The northwestern area of the borough is served by the orange and blue lines of the Montreal Metro. Major thoroughfares include Beaubien St., Rosemont Blvd., Masson St., Saint Laurent Blvd., Saint Hubert St., Papineau Ave., Pie-IX Blvd., and Viau St. The notorious Tunnel de la mort is located in that borough, at the intersection of Iberville St. and Saint-Joseph Blvd.

The borough includes the neighbourhoods of the Petite Patrie, comprising several "ethnic" neighbourhoods such as Little Italy; Rosemont; and Nouveau Rosemont.

Important features of the borough include the Jean-Talon Market, the Montreal Heart Institute, the Hôpital Santa Cabrini, the Hôpital Maisonneuve-Rosemont, the Olympic Village, Maisonneuve Park (including the Insectarium and Montreal Botanical Garden), Saint Sophie Ukrainian Orthodox Cathedral, the Church of the Madonna della Difesa and Dante Park. 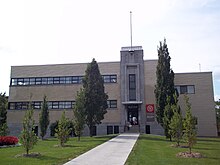