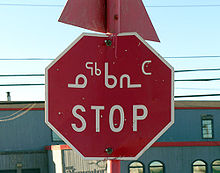 A bilingual stop sign in Nunavut displaying text in both Inuktitut syllabics and the English Latin alphabet. The Inuktitut ᓄᖅᑲᕆᑦ transliterates as nuqqarit.

Inuktitut syllabics (Inuktitut: ᖃᓂᐅᔮᖅᐸᐃᑦ [qaniujaːqpaˈit][1] or ᑎᑎᕋᐅᓯᖅ ᓄᑖᖅ [titiʁauˈsiq nuˈtaːq]) is an abugida-type writing system used in Canada by the Inuktitut-speaking Inuit of the territory of Nunavut and the Nunavik region in Quebec. In 1976, the Language Commission of the Inuit Cultural Institute made it the co-official script for the Inuit languages, along with the Latin script.

Qaniujaaqpait derives from the root qaniq meaning mouth; its opposite is Qaliujaaqpait (ᖃᓕᐅᔮᖅᐸᐃᑦ) meaning Latin script (derived from qaliit, a word describing the markings or the grain in rocks). Titirausiq nutaaq meaning new writing system is to be seen in contrast to Titirausiit nutaunngittut (ᑎᑎᕋᐅᓰᑦ ᓄᑕᐅᓐᖏᑦᑐᑦ), the old syllabics used before the reforms of 1976.[2]

The first efforts to write Inuktitut came from Moravian missionaries in Greenland and Labrador in the mid-19th century using Latin script. The first book printed in Inuktitut using Cree script were selections from the Gospels in the dialect of the Inuit of Little Whale River (ᒋᓴᓯᑊ ᐅᑲᐤᓯᐣᑭᐟ, Jesus' words),[3] printed by John Horden in 1855–56 at Moose Factory for Edwin Arthur Watkins to use among the Inuit at Fort George. In November 1865, Horden and Watkins met in London under Henry Venn’s direction to adapt Cree syllabics to the Inuktitut language.[4] In the 1870s, Edmund Peck, another Anglican missionary, started printing according to that standard. Other missionaries, and later linguists in the employ of the Canadian and American governments, adapted the Latin alphabet to the dialects of the Mackenzie River delta, the western Arctic islands and Alaska.

The Inuktitut script (titirausiq nutaaq) is commonly presented as a syllabary. The dots on the letters in the table mark long vowels; in the Latin transcription, the vowel is doubled.

Note: An image of the chart is also available.

The Makivik Corporation expanded the official version of the script to restore the ai-pai-tai column. The common diphthong ai has generally been represented by combining the a form with a stand-alone letter ᐃ i[example needed]. This fourth-vowel variant had been removed so that Inuktitut could be typed and printed using IBM Selectric balls in the 1970s. The reinstatement was justified on the grounds that modern printing and typesetting equipment no longer suffers the restrictions of earlier typewriting machinery. The ai-pai-tai column is used only in Nunavik.

The Inuit languages are written in different ways in different places. In Greenland, Alaska, Labrador, the Mackenzie River delta in the Northwest Territories and in part of Nunavut, it is written with the Latin alphabet (also known as Roman orthography in some regions). In all of Nunavut, east of Cambridge Bay, and in Nunavik, Quebec, Inuktitut is written using the Inuktitut script. At present, Inuktitut syllabics enjoys official status in Nunavut, alongside the Latin alphabet, and is used by the Kativik Regional Government of Nunavik. In Greenland, the traditional Latin script is official and is widely used in public life.

Because the Inuit languages are a continuum of only partially intercomprehensible dialects, the language varies a great deal across the Arctic. Split up into different political divisions and different churches reflecting the arrival of various missionary groups, Inuktitut writing systems can vary a great deal.