Romanian cuisine is a diverse blend of different dishes from several traditions with which it has come into contact, but it also maintains its own character. It has been mainly influenced by Turkish and a series of European cuisines in particular from the Balkans, or Hungarian cuisine as well as culinary elements stemming from the cuisines of the Slavic-speaking countries of Eastern and Central Europe.[1]

Romanian cuisine includes numerous holiday dishes arranged according to the mentioned season and holiday since the country has its roots in the Eastern Orthodox Church. Romanian dishes consist of vegetables, cereals, vegetable oils, milk, dairy products and meat.[1]

There are quite a few different types of dishes, which are sometimes included under a generic term; for example, the category ciorbă includes a wide range of soups with a characteristic sour taste. These may be meat and vegetable soups, tripe (ciorbă de burtă) and calf foot soups, or fish soups, all of which are soured by lemon juice, sauerkraut juice, vinegar, or borș (traditionally made from bran). The category țuică (plum brandy) is a name for a strong alcoholic spirit in Romania.

In the history of Romanian culinary literature, Costache Negruzzi and Mihail Kogălniceanu were the compilers of a cookbook "200 rețete cercate de bucate, prăjituri și alte trebi gospodărești" (200 tried recipes for dishes, pastries and other household things) printed in 1841.[2] Also, Negruzzi writes in "Alexandru Lăpușneanu": "In Moldavia, at this time, fine food wasn't fashioned. The greatest feast only offered a few types of dishes. After the Polish borș, Greek dishes would follow, boiled with herbs floating in butter, after that, Turkish pilaf, and finally cosmopolitan steaks".[3]

Cheese has been a part of Romanian cuisine since ancient history. Brânză is the generic term for cheese in Romanian; it is originally a Dacian word. Traditional Dacian cuisine included vegetables (lentils, peas, spinach, garlic) and fruits (grapes, apples, raspberries) with high nutritional values.[4] The Dacians produced wine in massive quantities. Once, Burebista, a Dacian king, angered by the wine abuse of his warriors, cut down the vines; his people gave up drinking wine.[5] Legend says that the Dacian people created their own beer.[citation needed] Romans helped introduce different pastries made with cheese, including alivenci, pască, or brânzoaice. They also introduced different variations of millet porridge.

Maize and potatoes became staples of Romanian cuisine after their introduction to Europe. Maize, in particular, contributed to health and nutrition improvements of Romanians in the 16th and 17th centuries, resulting in a population boom.

For more than four centuries, Wallachia and Moldavia, the two medieval Romanian principalities, were strongly influenced by their neighbor, the Ottoman Empire. Ottoman cuisine changed the Romanian table with appetizers made from various vegetables, such as eggplant and bell peppers, as well as various meat preparations, such as chiftele (deep-fried meatballs, a variation of kofta) and mici (short sausages without casings, usually barbecued). The various kinds of ciorbă/borș (sour soups) and meat-and-vegetable stews, such as iahnie de fasole (beans), ardei umpluți (stuffed peppers), and sarmale (stuffed cabbage) are influenced by Turkish cuisine. The Romanian tomato salad is a variation of the Turkish çoban salata. Many traditional desserts and pastries combine honey and nuts, such as baclava, sarailie (or seraigli), halva, and rahat (Turkish delight).

Romanian recipes bear the same influences as the rest of Romanian culture. The Turks brought meatballs (perișoare in a meatball soup), from the Greeks there is musaca, from the Austrians there is the șnițel, and the list could continue. The Romanians share many foods with the Balkan area (in which Turkey was the cultural vehicle), and Eastern Europe (including Moldova and Ukraine). Some others are original or can be traced to the Romans, as well as other ancient civilizations. The lack of written sources in Eastern Europe makes it impossible to determine today the exact origin for most of them.

One of the most common meals is the mămăligă, the precursor of polenta, served on its own or as an accompaniment. Pork is the main meat used in Romanian cuisine, but also beef is consumed and a good lamb or fish dish is never to be refused.

Before Christmas, on December 20 (Ignat's Day or Ignatul in Romanian),[6] a pig is traditionally sacrificed by every rural family.[7] A variety of foods for Christmas are prepared from the slaughtered pig, such as:

The Christmas meal is sweetened with the traditional cozonac, a sweet bread made with nuts, poppy seeds, or rahat (Turkish delight).

At Easter, lamb is served: the main dishes are borș de miel (lamb sour soup), roast lamb, and drob de miel – a Romanian-style lamb haggis made from minced offal (heart, liver, lungs), lamb meat and spring onions with spices, wrapped in a caul and roasted.[8][9] The traditional Easter cake is pască, a pie made from yeast dough with a sweet cottage cheese filling at the center.[10][11]

Romanian pancakes, called clătite, are thin (like the French crêpe) and can be prepared with savory or sweet fillings: ground meat, cheese, or jam. Different recipes are prepared depending on the season or the occasion.[12]

Wine is the preferred drink, and Romanian wine has a tradition of over three millennia.[12] Romania is currently the world's ninth largest wine producer, and recently the export market has started to grow.[12] Romania produces a wide selection of domestic varieties (Fetească, Grasă, Tămâioasă, Busuioacă, and Băbească), as well as varieties from across the world (Italian Riesling, Merlot, Sauvignon blanc, Cabernet Sauvignon, Chardonnay, and Muscat Ottonel). Beer is also highly regarded, generally blonde pilsener beer, made with German influences. There are also Romanian breweries with a long tradition.

According to the 2009 data of FAOSTAT, Romania is the world's second largest plum producer (after the United States),[13] and as much as 75% of Romania's plum production is processed into the famous țuică, a plum brandy obtained through one or more distillation steps.[14]

Followers of the Romanian Orthodox Church keep fast during several periods throughout the ecclesiastical calendar amounting to a majority of the year. In the Romanian Orthodox tradition, devotees keep to a diet without any animal products during these times. As a result, vegan foods are abundant in stores and restaurants; however, Romanians may not be familiar with a vegan or vegetarian diet as a full-time lifestyle choice.[15] Many recipes below have vegan versions, and the Vegetables section below contains many common fasting foods. 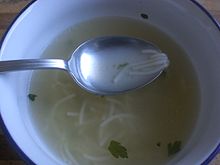 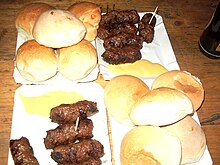 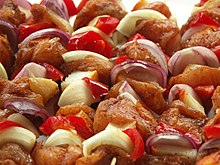 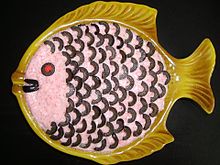 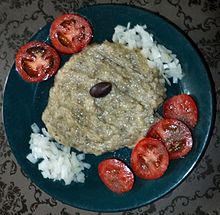 The generic name for cheese in Romania is brânză, and it is considered to be of Dacian origin. Most of the cheeses are made from cow's or sheep's milk. Goat's milk is rarely used. Sheep cheese is considered "the real cheese", although in modern times, some people refrain from consuming it due to its higher fat content and specific smell.