Infinite Construction - STEAM
Not to be confused with Province of Rome.
Major Roman administrative territorial entity outside of Italy 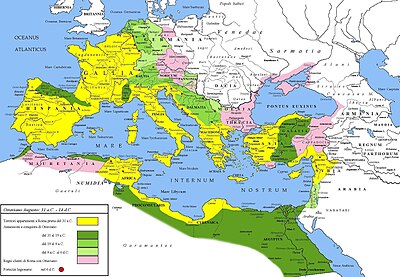 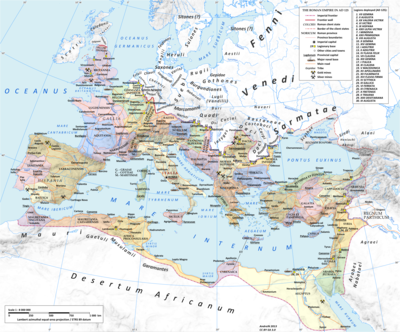 The Roman provinces (Latin: provincia, pl. provinciae) were the administrative regions of the Roman Empire outside of Italy that were controlled by the Romans under the Republic and later under the Empire. Each province was ruled by a Roman appointed as governor.

A province was the basic and, until the tetrarchy (from 293 AD), the largest territorial and administrative unit of the empire's territorial possessions outside Italy. The word province in Modern English has its origins in the Latin term used by the Romans.

Provinces were generally governed by politicians of senatorial rank, usually former consuls or former praetors. A later exception was the province of Egypt, which was incorporated by Augustus after the death of Cleopatra and was ruled by a governor of only equestrian rank, perhaps as a discouragement to senatorial ambition. That exception was unique but not contrary to Roman law, as Egypt was considered Augustus's personal property, following the tradition of the kings of the earlier Hellenistic period.

The Latin term provincia also had a more general meaning of "jurisdiction".

The Latin word provincia originally meant any task or set of responsibilities assigned by the Roman Senate to an individual who held imperium (right of command), which was often a military command within a specified theatre of operations.[1][2] Under the Roman Republic, the magistrates were elected to office for a period of one year, and those serving outside the city of Rome, such as consuls acting as generals on a military campaign, were assigned a particular provincia, the scope of authority within which they exercised their command.

The territory of a people who were defeated in war might be brought under various forms of treaty, in some cases entailing complete subjection (deditio). The formal annexation of a territory created a province, in the modern sense of an administrative unit that is geographically defined. Republican-period provinces were administered in one-year terms by the consuls and praetors who had held office the previous year and were invested with imperium.[3]

Rome started expanding beyond Italy during the First Punic War. The first permanent provinces to be annexed were Sicilia in 241 BC and Corsica et Sardinia in 237 BC. Militarized expansionism kept increasing the number of these administrative provinces until there were no longer enough qualified individuals to fill the posts. [4][5]

The terms of provincial governors often had to be extended for multiple years (prorogatio), and on occasion, the Senate awarded imperium even to private citizens (privati), most notably Pompey the Great.[6][7] Prorogation undermined the republican constitutional principle of annually-elected magistracies and the amassing of disproportionate wealth and military power by a few men through their provincial commands was a major factor in the transition from a republic to an imperial autocracy.[8][9][10][11]

In the early days of the Roman presence in Gallia Cisalpina, the issue was rebellion. Later, the issue was risk of invasions by warlike peoples east of Italy. The city of Aquileia was founded to protect northern Italy from invasions. Gaius Julius Caesar granted the inhabitants of this region Roman citizenship and incorporated the region into Italy.

Imperial provinces during the principate 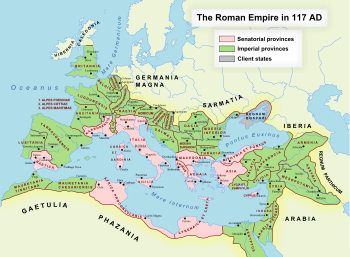 In the so-called Augustan Settlement of 27 BC, which established the Roman Empire, the governance of the provinces was regulated. Gaius Julius Caesar Octavianus, having emerged from the civil wars as the undisputed victor and master of Rome, officially laid down his powers and, in theory, restored the authority of the Roman Senate. Octavian himself assumed the title "Augustus" and was given to govern, in addition to Egypt, the strategically-important provinces of Gaul, Hispania and Syria (including Cilicia and Cyprus).

Under Augustus, Roman provinces were classified as either public or imperial, depending on whether power was exercised by the Senate or the emperor. Generally, the older provinces that had existed under the Republic were public. Public provinces were, as they had been under the Republic, governed by a proconsul, who was chosen by lot among the ranks of senators who were ex-consuls or ex-praetors, depending on the province that was assigned.

The major imperial provinces were under a legatus Augusti pro praetore, also a senator of consular or praetorian rank. Egypt and some smaller provinces in which no legions were based were ruled by a procurator (praefectus in Egypt), whom the emperor selected from non-senators of equestrian rank.

The status of a province could change from time to time. In AD 68, of a total 36 provinces, 11 were public and 25 imperial. Of the latter, 15 were under legati and 10 under procuratores or praefecti.

During the principate, the number and size of provinces also changed, through conquest or the division of existing provinces. The larger or most heavily-garrisoned provinces (for example Syria and Moesia) were subdivided into smaller provinces to prevent any single governor from holding too much power.

Many of the above provinces were under Roman military control or under the rule of Roman clients for a long time before being officially constituted as civil provinces. Only the date of the official formation of the province is marked above, not the date of conquest. 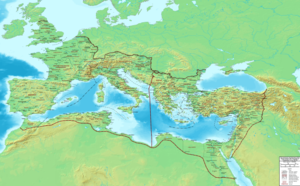 The Roman Empire and its administrative divisions, c. 395

Emperor Diocletian introduced a radical reform known as the tetrarchy (284–305), with a western and an eastern Augustus or senior emperor, each seconded by a junior emperor (and designated successor) styled caesar, and each of these four defending and administering a quarter of the empire. In the 290s, Diocletian divided the empire anew into almost a hundred provinces, including Italy. Their governors were hierarchically ranked, from the proconsuls of Africa Proconsularis and Asia through those governed by consulares and correctores to the praesides. These last were the only ones recruited from the equestrian class. The provinces in turn were grouped into (originally twelve) dioceses, headed usually by a vicarius, who oversaw their affairs. Only the proconsuls and the urban prefect of Rome (and later Constantinople) were exempt from this, and were directly subordinated to the tetrarchs.

Although the Caesars were soon eliminated from the picture, the four administrative resorts were restored in 318 by Emperor Constantine I, in the form of praetorian prefectures, whose holders generally rotated frequently, as in the usual magistracies but without a colleague. Constantine also created a new capital, known after him as Constantinople, which was sometimes called 'New Rome' because it became the permanent seat of the government. In Italy itself, Rome had not been the imperial residence for some time and 286 Diocletian formally moved the seat of government to Mediolanum (modern Milan), while taking up residence himself in Nicomedia. During the 4th century, the administrative structure was modified several times, including repeated experiments with Eastern-Western co-emperors. Provinces and dioceses were split to form new ones, the praetorian prefecture of Illyricum was abolished and reformed. In the end, with the rise of Odoacer in 476 and the death of Julius Nepos in 480, administration of the effectively reduced Empire was permanently unified in Constantinople.

Detailed information on the arrangements during this period is contained in the Notitia Dignitatum (Record of Offices), a document dating from the early 5th century. Most data is drawn from this authentic imperial source, as the names of the areas governed and titles of the governors are given there. There are however debates about the source of some data recorded in the Notitia, and it seems clear that some of its own sources are earlier than others. It is interesting to compare this with the list of military territories under the duces, in charge of border garrisons on so-called limites, and the higher ranking Comites rei militaris, with more mobile forces, and the later, even higher magistri militum.

Justinian I made the next great changes in 534–536 by abolishing, in some provinces, the strict separation of civil and military authority that Diocletian had established. This process was continued on a larger scale with the creation of extraordinary Exarchates in the 580s and culminated with the adoption of the military theme system in the 640s, which replaced the older administrative arrangements entirely. Some scholars use the reorganization of the empire into themata in this period as one of the demarcations between the Dominate and the Byzantine (or the Later Roman) period. As a matter of scholarly convenience, the medieval phase of the Roman Empire is today conventionally referred to as Byzantine, named after the original name of the city that Constantine rebuilt into the new capital of Constantinople.

Primary sources for lists of provinces