The Roman Republic (Italian: Repubblica Romana) was proclaimed on 15 February 1798 after Louis-Alexandre Berthier, a general of Napoleon, had invaded the city of Rome on 10 February. The Roman Republic was one of the Italian "sister republics" of Revolutionary France. It was placed under the French Directory and was composed of territory conquered from the Papal States. Pope Pius VI was exiled to France and died there in 1799. It immediately took control of the other two former-papal revolutionary administrations, the Tiberina Republic and the Anconine Republic. The Roman Republic was short-lived, as the Papal States were restored in October 1799.

Napoleon's campaign on the Italian peninsula from 1796 to 1797 was one of the reasons for his elevation to supreme commander of the French Army during the Wars of the Republic. After the creation of the First Coalition (Holy Roman Empire, Britain, Prussia, Spain, Naples, etc.) in 1792, Napoleon Bonaparte intended to take the fight to the coalition in Northern Italy to force the Austrians to the negotiating table via an invasion of Piedmont. At the same time, he intended to reinforce the French Army of Italy, which was outnumbered by Austria and the Italian States. This invasion of the Italian Peninsula was also a diversion since, according to the First Coalition, the main offensive was expected in the Rhine River. Rome, under the rule of the Papal States, was part of the First Coalition, along with many other Italian states. 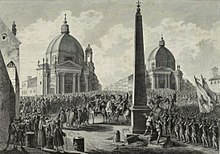 After crossing the Alps in April 1796 and defeating the Piedmontese army on 12 April 1796 in the Battle of Montenotte and on 21 April 1796 in the Battle of Mondovì, Bonaparte turned his attention south of Piedmont to deal with the Papal States. Bonaparte, skeptical over divided command for the invasion, sent two letters to the Directory. The letters let the Directory relent the invasion for a while. The Austrians were defeated at the Battle of Lodi on 10 May 1796 and retreated to Minico. Under the Treaty of Tolentino, signed on 19 February 1797, Rome was forced to accept an ambassador of the French Republic.[1] In February 1798, the French invaded the Papal States, motivated by the killing of French general Mathurin-Léonard Duphot in December 1797. After the successful invasion, the Papal States became a satellite state renamed the Roman Republic, under the leadership of Louis-Alexandre Berthier, one of Bonaparte's generals.[2] Pope Pius VI was taken prisoner, escorted out of Rome on 20 February 1798 and exiled to France, where he would later die.

However, plagued by internal struggles, the republic did not last long and popular support for it was low. On 29 November 1798, the very day that the 1798–1802 War of the Second Coalition had begun, a 1713–1799 Kingdom of Naples Army literally walked into the lightly guarded City of Rome before simply leaving and returning southward to home. In 1798–1799, the then Governor of the Roman Republic as of 19 November 1798, Jacques MacDonald led his forces in the 1798 Battle of Ferentino at Ferentino, then the 1798 Battle of Otricoli at Otricoli, and then the 5 December 1798 Battle of Civita Castellana at Civita Castellana. This was then followed by a military affair at Calvi Risorta and a second military affair on 3 January 1799 at Capua before he resigned his command.

Following a Neapolitan invasion on 30 September 1799, the Papal States were restored under Pope Pius VII in June 1800.[3] The French invaded the Papal States again in 1808, after which it was divided between France and the Kingdom of Italy until the end of the Napoleonic Wars in 1815.

The Republic's constitutional organization of powers was heavily influenced by that of the French Constitution of 1795, which itself was inspired by and loosely based on that of the ancient Roman Republic. Executive authority was vested in a Consulate consisting of five consuls. The legislative branch was composed of two chambers, a 60-member Tribunate and a 30-member Senate, which elected the consuls.[4]

The Roman Republic flag was a vertical tricolour black-white-red, taken from the French tricolour, as granted by Napoleon. It was governed by a clique of consuls, like the ancient Roman Republic. French forces had invaded the Papal States partly in revenge for the death of French general Mathurin-Léonard Duphot in 1797.[citation needed]

In the opera Tosca by Giacomo Puccini the character Angelotti is called "consul of the deceased Roman Republic" (the plot takes place in 1800; Angelotti escapes the papal prison); he is a fictional character although his name evokes that of the consul Liborio Angelucci.

In James Joyce's short story "The Sisters" in *Dubliners* (1914) the unnamed protagonist remembers being told "stories about the catacombs and about Napoleon Bonaparte..." by Father Flynn, who had studied in Rome.