Roeselare (Dutch pronunciation: [ˈrusəlaːrə], French: Roulers, West Flemish: Roeseloare) is a Belgian city and municipality in the Flemish province of West Flanders. The municipality comprises the city of Roeselare proper and the towns of Beveren, Oekene and Rumbeke.

The name of the city is derived from two Germanic words meaning "reed" and "open space", i.e., a marsh in a forest glade. Roeselare's minor seminary is famous for having hosted the famous Flemish poets Guido Gezelle, Albrecht Rodenbach and missionary Jesuit Constant Lievens. The city is also home to the Rodenbach brewery.

Traces of early dwellings have been found in the area, including prehistoric flint tools, Gallo-Roman wells, and a small 9th century Frankish building. The first mention of Roslar dates from a document dated 821 or 822, whereby the former domain of the Menapii, also called the Rollare villa in later documents, was given to Elnon Abbey. According to legend, Baldwin Iron Arm, Count of Flanders, kidnapped Judith, the daughter of Charles the Bold in 862 in Senlis and brought her to a fortress that used to be where the present Rumbeke Castle stands. The Roeselare area soon became part of the County of Flanders. The rights to build fortifications and to hold a public market date from 957, during the lordship of Baldwin III.

The city received its charter of freedoms in the mid-13th century, period in which it also built its first city hall and belfry. The manufacturing of cloth was then the main driver of the local economy. The few defensive walls that the city had were no match against the forces of Maximilian of Austria, who utterly destroyed the city at the end of the 15th century. The market hall and Saint Michael church were rebuilt in the year 1500.

The 16th century proved to be disastrous for the city as the Spanish rulers ruthlessly repressed any desire for autonomy in the Low Countries, both political and religious. Iconoclasts stormed the city in 1566 and destroyed most of the sacred art. The Eighty Years' War that followed put an end to the wool supply from England, which in turn resulted in the disappearance of the cloth industry in Roeselare. Starting with the reigns of Archdukes Albert and Isabella, the beginning of the 17th century was a lot kinder to Roeselare. New churches and religious houses were built and old ones repaired. New schools also appeared in the city and the cloth industry found a new life. The second half of the century, however, was marked by the wars of Louis XIV and Marshal Turenne against the Spanish, with further plundering and misery. The Treaty of Nijmegen in 1678 made Roeselare a border city, a situation that encouraged smuggling rather than regular economic development.

The 18th century was a generally prosperous period that saw the construction of the current city hall. In 1794, the area was the scene of a French victory over the Austrians. The victors imposed deep reforms on the country, such as a new legal system (the Napoleonic Code) and the curtailment of religious freedoms, which lasted until the Concordat of 1802 between Napoleon and Pope Pius VII.

Several members of the Rodenbach family of Roeselare took part in the events leading to Belgian Independence in 1830. Other members of the family became soldiers or diplomats. Pedro and Alexander founded the brewery which is still in operation today. The general economy, however, did not fare very well as mechanization displaced many small artisans. The advent of the railway and the digging of a canal linking the city to the River Lys in the 1860s were beneficial. World War I stopped the economic boom in its tracks as the city became a large camp ground for the German troops fighting on the front lines in neighbouring Diksmuide. By the end of the war, two thirds of the city was destroyed due to British bombing.[2]

On 27 and 28 May 1940, the Belgian army lost its last stand here against the advancing Wehrmacht. This was followed by four years of German occupation, although without too much destruction. The city today is a regional center that provides commercial and media services, as well as a variety of occupations in the food industry, to the surrounding area.

Roeselare houses a whole family of giant puppets. The head of the family, Rolarius – who is also the alleged founder of the city – his wife Carlotta and son Opsinjoorke, as well as several other relatives, appear at festivities and carnivals, dancing to the beat of the giants’ song.

Roeselare also houses some kind of folklore around the character named Peegie, he's a slick merchant, and is in a way based on the real character of the town as a merchant town in his early days.

Roeselare is the hometown of soccer team KSV Roeselare who play in the Belgian Second Division since 2010-11. The volleyteam Knack Randstad Roeselare who plays the CEV Champions League. Formula 1 driver Stoffel Vandoorne also lives in Roeselare.

Roeselare is twinned with the town of Clonmel in Co. Tipperary, Ireland. 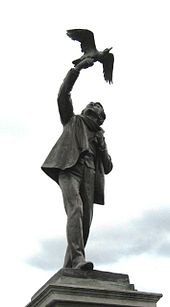