Rockport is adjacent to the town of Fulton, and many refer to the combined communities as "Rockport-Fulton"; however, Rockport and Fulton are legally separate municipalities.

Following the Civil War, a number of people considered developing the Live Oak Peninsula. Joseph F. Smith, who had founded the nearby town of St. Mary's in 1850, joined with Thomas H. Mathis and his cousin J.M. Mathis, who were agents of the Morgan Steamship line, and built a wharf at the site of what would later become the town of Rockport, in 1867. The same year, George W. Fulton and his wife, Texas heiress and Joseph Smith's cousin, Harriet Smith Fulton moved to her extensive land holdings on the peninsula. Fulton also took an interest in the development of Rockport, as well as creating the town of Fulton farther up the coastline. In response, a nascent cattle-slaughtering and packing operation at the wharf expanded rapidly, allowing Rockport to be officially incorporated as a town in 1870; its name arising from the rock ledge that runs along the shore. Thomas Mathis became Rockport's first mayor after being appointed by the governor.[8] A year later in 1871, the town achieved "city" status after continued growth.[9]

In 1871, the Mathis cousins teamed up with local ranching families of George W. Fulton and Thomas M. Coleman to raise and slaughter cattle for shipment out of the city's wharf on their steamship line. The partnership proved highly successful, and continued to draw people and businesses to the city. The national Panic of 1873 took its share of the town's prosperity and caused a slump for the next few years. The meat packing market was slow to recover, and the Mathis cousins abandoned the ranching partnership in 1879. Fulton and Coleman then re-formed their ranching partnership, an organization that continued into the 1930s. For many years Fulton and others petitioned for the railroad to extend their lines to Rockport to provide a second source of transportation and break the Morgan Line's monopoly on the Coastal Bend ports. After offering free rights of way across the Coleman-Fulton ranch, and hundreds of acres in town lots, finally, in 1888 the railroad arrived. The Morgan Steamship company now had competition, and as the local cattle ranchers began shipping live cattle by train, The Morgan Line withdrew from serving the Coastal Bend. Another brief growth spurt began and soon ended, here and across Texas, due to some bad winters and the development of the cattle industry in the mid-west. The railroad, however, brought tourists, and the city's economy grew with several large hotels catering to that industry. Rockport's economy soon came to be dominated by shipbuilding and tourism toward the end of the 19th century. At the same time, the railroad offered speedy transportation for crops, and a land boom caused by farming followed until brought to a halt with the national Panic of 1893.[9]

Rockport's economy continued struggling into the early 20th century and took another hit in 1919 when a major hurricane decimated the region. A slow recovery ensued stalling additional development. The city's fortunes however began to improve in 1925 following the establishment of a lucrative shrimping industry which grew further during the 1930s and benefited from the construction of a harbor in 1935. Shrimping activity decreased during World War II but recovered thereafter, boosting the town along with an important boat-building industry that developed in this period as well. By the century's end, shrimping continued to be an important part of the Rockport economy alongside fishing and tourism.[9]

On August 25, 2017 Hurricane Harvey (name now retired)[10] made landfall near the city as a Category 4 storm on the Saffir–Simpson scale.[11] Causing one death and catastrophic damage.[12] One person died in a house fire in the city, unable to be rescued due to the extreme weather conditions,[13] entire blocks were destroyed by the hurricane's violent eyewall winds, the city's courthouse was severely damaged when a cargo trailer was hurled into it, coming to a stop halfway through the structure, the gymnasium of the Rockport-Fulton High School lost multiple walls while the school itself suffered considerable damage,[14] many homes, apartment buildings, and businesses sustained major structural damage from the intense winds, and several were completely destroyed. Numerous boats were damaged or sunk at a marina in town, airplanes and structures were destroyed at the Aransas County Airport, and the Fairfield Inn was severely damaged as well,[15] About 20 percent of Rockport's population was displaced, as they were still unable to return to their homes a year after the hurricane.[16]

The climate in this area is characterized by hot, humid summers and generally mild-to-cool winters. According to the Köppen Climate Classification system, Rockport has a humid subtropical climate, abbreviated "Cfa" on climate maps.[18] 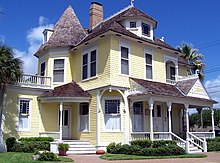 The Hoopes-Smith House in Rockport is listed on the National Register of Historic Places.

Rockport is a popular tourist destination for its access to various forms of marine recreation and attractions such as boating, fishing (bay, offshore, wade, beach, and pier), duck hunting, waterskiing, swimming, birdwatching, and seafood. The city's largest public beach, Rockport Beach Park,[21] offers an array of community facilities including a playground and two beach pavilions.

The city hosts several fairs and expositions each year including the Oyster Fest, Seafair, and a Wine Festival. The Rockport Art Festival, held annually since 1970, is a major event with art exhibitions, auctions, and vendors congregating in the city around the Fourth of July holiday. A more recent addition to the city's list of popular annual attractions is the Rockport Film Festival which has screened and judged entries since its founding in 2007.[22][23][24]

Rockport is also home to an aquarium and multiple historic sites such as the Fulton Mansion and the city's heritage district. The community also hosts the Texas Maritime Museum,[25] as well as numerous art galleries, restaurants, and shops. Area visitor accommodations are provided by a wide range of lodgings, from small bed and breakfasts to major hotels and RV facilities.

Large windswept live oaks are a dominating feature of the area, and the state's oldest live oak, the "Big Tree", resides on nearby Lamar Peninsula.

There are a number of marinas, boat-launching ramps, marine service businesses, and ship chandlers in the area (catering to both recreational and commercial vessels of either the sail or power variety). Several marinas are operated by the Aransas County Navigation District.[26] The Key Allegro Marina, with its home-lined canals and party atmosphere, is a popular destination among visitors.

The Big Blue Crab is a local park and attraction located on the banks of the Little Bay next to the historic Sea View Motel. It features an elevated blue crab sculpture that is the world's largest. Originally constructed in the 1950s, the crab fell apart in the 1970s, but the city rebuilt the attraction in 2012 to even larger proportions. The crab suffered major damage five years later in Hurricane Harvey.[27]

The area around and in Rockport is noted as a prime birdwatching center, located on a major North American migratory bird route, the Central Flyway.

Whooping cranes winter in the large Aransas National Wildlife Refuge located nearby. Local organizations such as the Aransas Bird and Nature Club have helped preserve unique birdwatching reserves like the Connie Hagar sanctuary and Aransas Woods that are easily accessible. Located along the migration route of several species of hummingbirds, the city hosts an annual "Hummer and Birding Expo" which includes tours of local residences where hundreds of ruby-throated hummingbirds can be viewed at feeders.

All of Rockport is served by the Aransas County Independent School District, and the city is home to the Rockport-Fulton High School Pirates. Sacred Heart School, a private school, also serves the community.[28]

The Aransas County Public Library is located at 701 E. Mimosa Street in Rockport.