Bourassa was born to a working class family in Montreal, the son of Adrienne (née Courville) (1897–1982) and Aubert Bourassa, a port authority worker.[3] Robert Bourassa graduated from the Université de Montréal law school in 1956 and was admitted to the Barreau du Québec the following year. On August 23, 1958, he married Andrée Simard, an heiress of the powerful shipbuilding Simard family of Sorel, Quebec. Later, he studied at Keble College, University of Oxford and also obtained a degree in political economy at Harvard University in 1960. On his return to Quebec, he was employed at the federal Department of National Revenue as a fiscal adviser. He also worked as a professor of public finance at Université de Montréal and Université Laval.

Bourassa was first elected as a Member of the Legislative Assembly of Quebec (MLA) for the riding of Mercier in 1966, then won the Quebec Liberal Party leadership election on January 17, 1970. He positioned himself as a young, competent administrator. He chose "100 000 jobs" as his slogan, which emphasized that jobs creation would be his priority. Bourassa felt the extensive hydro-electric resources of Quebec were the most effective means of completing the modernization of Quebec and sustaining job creation. He successfully led his party into government in the 1970 election, defeating the conservative Union Nationale government[4] and becoming the youngest premier in Quebec history.

One of Bourassa's first crises as premier was the October Crisis of 1970, in which his deputy, Pierre Laporte, was kidnapped and later murdered by members of the Front de libération du Quebec. Bourassa requested that Prime Minister Pierre Trudeau invoke the War Measures Act, as a result of which the Canadian armed forces quelled the insurgents. The army was withdrawn on 4 January 1971, and Paul Rose and some of his accomplices were found guilty of murder later that year.

Bourassa and Trudeau often clashed over issues of federal-provincial relations and Quebec nationalism, with Trudeau opposing what he saw as concessions to sovereignism. In June 1971 he participated in an attempt at constitutional reform, the Victoria Charter,[5] which quickly unravelled when Bourassa backed away from the proposed deal after it was strongly criticized by Quebec opinion leaders for not giving Quebec more powers.[6][7][8]

On 8 October 1971, Trudeau announced in the House of Commons that, after much deliberation, the policy of multiculturalism would be implemented in Canada.[9] Bourassa documented his strong opposition to Trudeau's policy in a letter which he released to the press on 17 November 1971, and stated he had "serious misgivings about the principle of the multicultural policy". The policy document tabled in the House "dissociates culture from language", which seemed to Bourassa "a questionable basis on which to found a policy". Bourassa declared that Quebec did not accept the federal government's approach to the principle of multiculturalism.[10]

During his time in power, Bourassa implemented policies aimed at protecting the status of the French language in Quebec. In 1974, he introduced Bill 22, which declared French to be the sole official language of the province. As a result, Quebec was no longer institutionally bilingual (French and English), though the rights of anglophones were still protected under the British North America Acts. Many businesses and professionals were unable to operate under such requirements. Bill 22 angered Anglophones while not going far enough for many Francophones; Bourassa was vilified by both groups.

Bourassa initiated the James Bay hydroelectric project in 1971 that led to the James Bay and Northern Quebec Agreement of 1975 with the Cree and Inuit inhabitants of the region. The Bourassa government also played a major role in rescuing the 1976 Olympic Games in Montreal from huge cost overruns and construction delays. Bourassa's government became embroiled in corruption scandals.

On 21 March 1974, workers belonging to the Fédération des travailleurs et travailleuses du Québec union working on the LG-2 construction site of the James Bay project rioted using their bulldozers to destroy the site they were working on while other workers set buildings afire.[11] The riot caused $35 million in damage, and was part of an extortion attempt on the part of the union boss André "Dédé" Desjardins, who was known in Quebec as the "King of Construction". In response to the violence at the LG-2 site, which confirmed long-standing rumors about thuggish practices on the part of construction unions, Bourassa appointed a commission consisting of a well respected judge Robert Cliche, a prominent Montreal labor lawyer Brian Mulroney and Guy Chevrette, the vice-president of the Centrale de l'enseignement du Québec, whose legal counsel was another prominent lawyer Lucien Bouchard to investigate corruption in the construction industry in Quebec.[11] The Cliche commission as it became known held 68 days of hearings on live TV, interviewing 279 people from the construction industry, who testified to widespread corruption and violence in the construction industry, and to the close ties between the Bourassa cabinet, the Mafia and corrupt construction union bosses.[11] Bouchard had wanted to have Bourassa testify before the commission, but Mulroney prevented this, saying that having the Premier of Quebec testify before the commission would be a violation of "executive privilege". Nonetheless, the Cliche commission established the Quebec construction industry was dominated by a casual brutality with thuggish union bosses teaching union organizers how best to break legs.[11] Workers who complained about corruption on the part of their bosses had their dogs murdered and their teenage children beaten up.[11]

Bourassa lost the 1976 provincial election to René Lévesque, leader of the sovereigntist Parti Québécois, in a massive landslide brought on by the language controversy and the corruption scandals, among other things. Bourassa himself was heavily defeated in his own riding by PQ challenger Gérald Godin. He resigned as Liberal Party leader and accepted teaching positions in Europe and the United States.[12] He remained in political exile until he returned to politics by winning the Quebec Liberal Party leadership election on October 15, 1983. On June 3, 1985, he won a by-election in Bertrand.

Bourassa led the PLQ to victory in the 1985 election. However, he lost his own seat to Parti Québécois candidate Jean-Guy Parent. On January 20, 1986, he was elected in a by-election in the Liberal stronghold of Saint-Laurent after the sitting Liberal MNA Germain Leduc resigned in his favour.

During his second term as premier, Bourassa invoked the notwithstanding clause of the Canadian Charter of Rights and Freedoms to override a Supreme Court of Canada ruling that declared parts of the Charter of the French Language unconstitutional, causing some of his anglophone ministers to resign. A few years later, however, he introduced modifications to the language charter. These compromises reduced the controversy over language that had been a dominant feature of Quebec politics over the previous decades.

Bourassa also pushed for Quebec to be acknowledged in the Canadian constitution as a "distinct society", promising Quebec residents that their grievances could be resolved within Canada with a new constitutional deal. He worked closely with Prime Minister Brian Mulroney and received many concessions from the federal government, culminating in the Meech Lake Accord in 1987 and the Charlottetown Accord in 1992. The Meech Lake Accord failed in June 1990 when two provinces, Manitoba and Newfoundland, refused to ratify the agreement their premiers had signed. That failure revived the Quebec separatist movement. The Charlottetown Accord was defeated in a nationwide plebiscite in 1992; it was heavily defeated even in Quebec, partly due to the perception that Bourassa had given away too much at the negotiations. 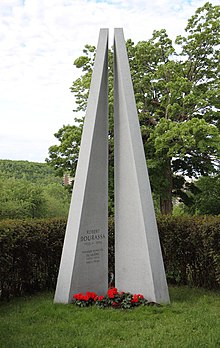 Bourassa retired from politics in 1994. He was replaced as Liberal leader and premier by Daniel Johnson, Jr., who lost an election to the sovereigntist Parti Québécois after only nine months.

In 1996, Bourassa, who had spent much of his vacation time in hot climates, died in Montreal of malignant melanoma[13] at the age of 63, and was interred at the Notre Dame des Neiges Cemetery in Montreal.[14] 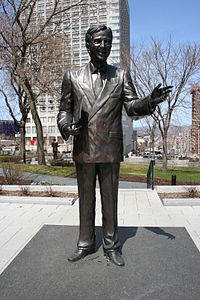 Statue of Bourassa on the grounds of the Quebec legislature

On October 18, 2006, Montreal Mayor Gérald Tremblay announced that Montreal's Park Avenue would be named after Bourassa.[15] On November 28 the Montreal city council voted in favour (40–22) of renaming Park Avenue after Bourassa.[17] If, as had been expected, Quebec's Toponymy Commission had approved the name change, all of Park Avenue and its continuation, Bleury, would have been renamed Robert Bourassa Avenue. This would have caused the newly named street to intersect René Lévesque Boulevard, named after a long time political rival to Bourassa. That boulevard, in turn, had been renamed from Dorchester Boulevard in 1987, in a decision that was also not without controversy.[18] This decision by the City of Montreal without any consultation with the people of the city caused an immediate controversy,[19] though many of those opposed to the change considered it a fait accompli.[20] The proposal spawned substantial grass-roots opposition, both because of the lack of prior citizen input and because Park is itself a meaningful street name, associated with the city's Mount Royal park.[21] In addition to protests and active opposition by a committee of Montreal residents and businesses opposed to the name change, an online petition garnered more than 18,000 virtual signatures against this renaming.[22] On February 5, 2007, Montreal mayor Gérald Tremblay withdrew his proposal to rename Park Avenue.[23] However, there is a Robert Bourassa Blvd., located in the Duvernay district of Laval, Quebec.

In March 2015, a section of University Street (from Notre-Dame Street to Sherbrooke Street) in the downtown core of Montreal was renamed Robert-Bourassa Boulevard.