Infinite Construction - STEAM
This article is about the Prime Minister of Canada. For the American TV writer and producer, see Robert Borden (TV producer).
8th prime minister of Canada

Borden was born in Grand-Pré, Nova Scotia. He worked as a schoolteacher for a period and then served his articles of clerkship at a Halifax law firm. He was called to the bar in 1878, and soon became one of Nova Scotia's most prominent barristers. Borden was elected to the House of Commons of Canada in 1896, representing the Conservative Party. He replaced Charles Tupper as party leader in 1901, and became prime minister after the party's victory at the 1911 federal election.

As prime minister, Borden led Canada through World War I and its immediate aftermath. His government passed the War Measures Act, created the Canadian Expeditionary Force, and eventually introduced compulsory military service, which sparked the 1917 conscription crisis. On the home front, it dealt with the consequences of the Halifax Explosion, introduced women's suffrage for federal elections, and used the North-West Mounted Police to break up the 1919 Winnipeg general strike. For the 1917 federal election (the first in six years), Borden created the Unionist Party, an amalgam of Conservatives and pro-conscription Liberals; his government was re-elected with an overwhelming majority.

Borden retired from politics in 1920, having accepted a knighthood in 1915 – the last Canadian prime minister to be knighted. He was also the last prime minister born before Confederation, and is the most recent Nova Scotian to hold the office. His portrait has appeared on Canadian one hundred-dollar notes produced since 1976, but in late 2016 the government announced Borden's image would be removed during the next redesign.[1]

Robert Laird Borden was born and educated in Grand-Pré, Nova Scotia, a farming community at the eastern end of the Annapolis Valley, where his great-grandfather Perry Borden, Sr. of Tiverton, Rhode Island, had taken up Acadian land in 1760 as one of the New England Planters. The Borden family had immigrated from Headcorn, Kent, England, to New England in the 1600s. Also arriving in this group was a great-great-grandfather, Robert Denison, who had come from Connecticut at about the same time. Perry had accompanied his father, Samuel Borden, the chief surveyor chosen by the government of Massachusetts to survey the former Acadian land and draw up new lots for the Planters in Nova Scotia. Through the marriage of his patrilineal ancestor Richard Borden to Innocent Cornell, Borden is descendant from Thomas Cornell of Portsmouth, Rhode Island.[2]

Borden's father Andrew Borden was judged by his son to be "a man of good ability and excellent judgement", of a "calm, contemplative and philosophical" turn of mind, but "he lacked energy and had no great aptitude for affairs". His mother Eunice Jane Laird was more driven, possessing "very strong character, remarkable energy, high ambition and unusual ability". Her ambition was transmitted to her first-born child, who applied himself to his studies while assisting his parents with the farm work he found so disagreeable. His cousin Sir Frederick Borden was a prominent Liberal politician.[3] 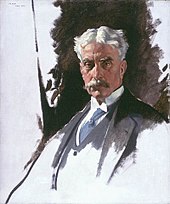 From 1868 to 1874, he worked as a teacher in Grand-Pré and Matawan, New Jersey. Seeing no future in teaching, he returned to Nova Scotia in 1874. Despite having no formal university education, he went to article for four years at a Halifax law firm. In August 1878, he was called to the Nova Scotia Bar, placing first in the bar examinations. Borden went to Kentville, Nova Scotia, as the junior partner of the Conservative lawyer John P. Chipman. In 1880, he was inducted into the Freemasons – St Andrew's lodge #1.[5]

In 1882, he was asked by Wallace Graham to move to Halifax and join the Conservative law firm headed by Graham and Charles Hibbert Tupper. In the Autumn of 1889, when he was only 35, Borden became the senior partner following the departure of Graham and Tupper for the bench and politics, respectively. His financial future guaranteed, on September 25, 1889, he married Laura Bond (1863–1940), the daughter of a Halifax hardware merchant. They would have no children. In 1894, he bought a large property and home on the south side of Quinpool Road, which the couple called "Pinehurst". In 1893, Borden successfully argued the first of two cases which he took to the Judicial Committee of the Privy Council. He represented many of the important Halifax businesses, and sat on the boards of Nova Scotian companies including the Bank of Nova Scotia and the Crown Life Insurance Company. In 1896, he became President of the Nova Scotia Barristers' Society, and took the initiative in organizing the founding meetings of the Canadian Bar Association in Montreal within the same year.[citation needed] By the time he was prevailed upon to enter politics, Borden had what some[who?] judged to be the largest legal practice in the Maritime Provinces, and had become a wealthy man. 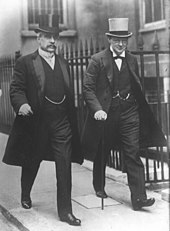 Borden and Winston Churchill in 1912

Borden was a Liberal until he broke with the party in 1891 over the issue of Reciprocity.

He was elected to Parliament in the 1896 federal election as a Conservative and in 1901 was selected by the Conservative caucus to succeed Sir Charles Tupper as leader of the Conservative Party. He was defeated in his Halifax seat in the 1904 federal election and re-entered the House of Commons the next year via a by-election in Carleton. Over the next decade he worked to rebuild the party and establish a reform policy, the Halifax Platform of 1907 which he described as "the most advanced and progressive policy ever put forward in Federal affairs". It called for reform of the Senate and the civil service, a more selective immigration policy, free rural mail delivery, and government regulation of telegraphs, telephones, and railways and eventually national ownership of telegraphs and telephones. Despite his efforts, his party lost the 1908 federal election to Wilfrid Laurier's Liberals.[6][7] Borden was however elected again for Halifax. His party's fortunes turned around in the 1911 federal election, however, when the Conservatives successfully campaigned against Laurier's proposals for a Reciprocity (free trade) agreement with the United States. Borden countered with a revised version of John A. Macdonald's National Policy and appeals of loyalty to the British Empire and ran on the slogan "Canadianism or Continentalism".[6] In British Columbia, the party ran on the slogan "A White Canada", playing to the fears of British Columbians that resented the increasing presence of cheap Asian labour and the resulting depression in wages.[8] In Quebec, concurrently, Henri Bourassa led a campaign against what he saw as Laurier's capitulation to British imperialism, playing a part in the defeat of Laurier's government and the election of Borden's Tories. 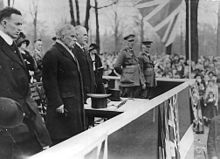 Borden at a Victory Bonds campaign in Toronto, 1915

As Prime Minister of Canada during the First World War, he transformed his government to a wartime administration, passing the War Measures Act in 1914. Borden committed Canada to provide half a million soldiers for the war effort. However, volunteers had quickly dried up when Canadians realized there would be no quick end to the war. Borden's determination to meet that huge commitment led to the Military Service Act and the Conscription Crisis of 1917, which split the country on linguistic lines.[9] In 1917 Borden recruited members of the Liberals (with the notable exception of leader Wilfrid Laurier) to create a Unionist government. The 1917 election saw the "Government" candidates (including a number of Liberal-Unionists) crush the Opposition "Laurier Liberals" in English Canada resulting in a large parliamentary majority for Borden. 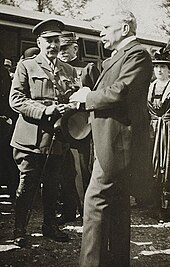 Sir Robert Borden pledged himself during the campaign to equal suffrage for women. With his return to power, he introduced a bill in 1918 for extending the franchise to women. This passed without division.

The war effort also enabled Canada to assert itself as an independent power. Borden wanted to create a single Canadian army, rather than have Canadian soldiers split up and assigned to British divisions as had happened during the Boer War. Sam Hughes, the Minister of Militia, generally ensured that Canadians were well-trained and prepared to fight in their own divisions, although with mixed results such as the Ross Rifle. Arthur Currie provided sensible leadership for the Canadian divisions in Europe, although they were still under overall British command. Nevertheless, Canadian troops proved themselves to be among the best in the world, fighting at the Somme, Ypres, Passchendaele, and especially at the Battle of Vimy Ridge.

During Borden's first term as Prime Minister, the National Research Council of Canada was established in 1916.

Borden and the Treaty of Versailles

In world affairs, Borden played a crucial role (according to McMillan) in transforming the British Empire into a partnership of equal states, the Commonwealth of Nations, a term that was first discussed at an Imperial Conference in London during the war. Borden also introduced the first Canadian income tax under Income War Tax Act of 1917, which was then meant to be temporary but later became permanent.

Convinced that Canada had become a nation on the battlefields of Europe, Borden demanded that it have a separate seat at the Paris Peace Conference. This was initially opposed not only by Britain but also by the United States, which perceived such a delegation as an extra British vote. Borden responded by pointing out that since Canada had lost a far larger proportion of its men compared to the US in the war (although not more in absolute numbers), Canada at least had the right to the representation of a "minor" power. British Prime Minister David Lloyd George eventually relented, and convinced the reluctant Americans to accept the presence of separate Canadian, Indian, Australian, Newfoundland, New Zealand and South African delegations. Despite this, Borden boycotted the opening ceremony, protesting at the precedence given to the prime minister of the much smaller Newfoundland over him.[10]

Not only did Borden's persistence allow him to represent Canada in Paris as a nation, it also ensured that each of the dominions could sign the Treaty of Versailles in its own right and receive a separate membership in the League of Nations. During the conference, Borden tried to act as an intermediary between the United States and other members of the British Empire delegation, particularly Australia and New Zealand over the issue of the League of Nations Mandate.[11] Borden also discussed with Lloyd George the possibility of Canada taking over the administration of Belize and the West Indies, but no agreement was reached.

At Borden's insistence, the treaty was ratified by the Canadian Parliament. Borden was the last Prime Minister to be knighted after the House of Commons indicated its desire for the discontinuation of the granting of any future titles to Canadians in 1919 with the adoption of the Nickle Resolution.

In 1919, Borden approved the use of troops to put down the Winnipeg general strike, which was feared to be the result of Bolshevik agitation from the Soviet Union.[12] 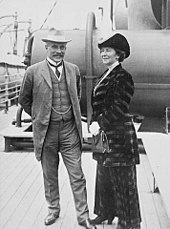 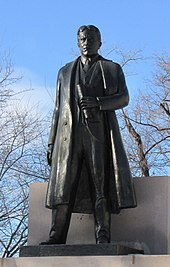 Sir Robert Borden retired from office in 1920. He was the Chancellor of Queen's University from 1924 to 1930, after having served as Chancellor of McGill University from 1918 to 1920 while still Prime Minister. Borden served as Vice-President of The Champlain Society between 1923 and 1925 and was the Society's first Honorary President between 1925 and 1938.[13] He also served as President of the Canadian Historical Association in 1930-31.[14]

Borden's successor Arthur Meighen was defeated by the new Liberal leader William Lyon Mackenzie King in the 1921 election. Nevertheless, Borden would go on to represent Canada once more on the international stage when he attended the Washington Naval Conference in 1922 and signed the resulting arms reduction treaty on Canada's behalf.

At the time of his death, Borden stood as president of two financial institutions: Barclays Bank of Canada and the Crown Life Insurance Company. Borden died on June 10, 1937, in Ottawa and is buried in the Beechwood Cemetery marked by a simple stone cross.[15]

Borden chose the following jurists to sit as justices of the Supreme Court of Canada: