Advertisement - You can get this game from STEAM
Place in Famagusta District, Cyprus

Rizokarpaso (Greek: Ριζοκάρπασο [locally [rizˑoˈkar̥paso]]; Turkish: Dipkarpaz) is a town on the Karpas Peninsula in the northeastern part of Cyprus. While nominally part of the Famagusta District of the Republic of Cyprus, it has been under the de facto control of Northern Cyprus since the partition of the island in 1974.

Rizokarpaso is one of the largest towns on the peninsula. Soil near the town consists of terra fusca which is very fertile. Local crops include carob, cotton, tobacco, and grain. The town's surroundings are famous as the wildest and one of the most unspoilt parts of the island. The municipality's territory features the Karpaz National Park, home to the Karpass donkey and some of the finest beaches of the island.[3]

The economy is primarily based on agriculture, husbandry and fisheries. Since 2000, the town has embraced the concept of eco-tourism and converted old traditional village houses into guesthouses in traditional styles. The area lacks any industrial plants.[3] 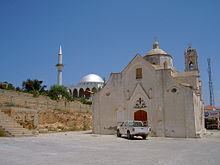 The Rizokarpaso area contains some of the earliest inhabited places in the island. These include the ancient cities of Karpasia and Aphendrika. It was the seat of one of the largest Lusignan baronies.[3]

The town has two churches: St. Synesios and the church of the Holy Trinity. They are examples of the typical Cypriot mixed style, combining features of the late Gothic introduced by the Lusignans with the late Byzantine style of the Orthodox tradition. When the island's Orthodox bishops were banished by the Lusignans in 1222, the Bishop of Famagusta was sent to Rizokarpaso and continued his work in St. Synesios, the main Orthodox church in the region. These are two of the few Christian churches to operate in the northern part of Cyprus, and has allegedly had services stopped by the Turkish Cypriot police.[4]

Rizokarpaso is partly located in the ancient city of Karpasia on the West coast, according to legend founded by king Pygmalion.

Before 1974, the town was predominantly inhabited by Greek-Cypriots. During the Turkish Invasion of Cyprus in 20 July 1974, the peninsula was cut off by Turkish troops, and this prevented the town's Greek-Cypriot inhabitants from fleeing to the south. As a result, with 250 Greek Cypriot inhabitants, Rizokarpaso is the home of the biggest Greek population in the North. Between 1974 and 1985, however, around 2500 Greek Cypriots left the village.[5] Although the Greek-Cypriot population is now mainly elderly and shrinking in size, they are still supplied by the UN, and Greek-Cypriot products are consequently available in some places.

In 1977, Turkish settlers were brought from different areas of Turkey, including Kars, Muş, Diyarbakır and Ağrı in the Eastern Anatolia Region, Mersin and Adana in the Mediterranean Region and Akkuş, Çarşamba, Akçaabat, Sürmene, Araklı and Trabzon in the Black Sea Region. In the 21st century, some Turkish Cypriots and Europeans also bought properties in the village and are now its residents.[5]

The town has a Turkish Cypriot municipality, whose current mayor is Suphi Coşkun from the Republican Turkish Party. Coşkun won the post in 2014, by winning over 50% of the votes and beating his predecessor,[6] Mehmet Demirci of the National Unity Party.[7]

The golden beach at sunset