The Rivonia Trial took place in South Africa between 9 October 1963 and 12 June 1964. The Rivonia Trial led to the imprisonment of Nelson Mandela and the others among the accused who were convicted of sabotage and sentenced to life at the Palace of Justice, Pretoria.[1][2]

The Rivonia Trial took its name from Rivonia, the suburb of Johannesburg where leaders had been arrested (and documents discovered) at Liliesleaf Farm, privately owned by Arthur Goldreich, on 11 July 1963. Various people and groups, including the African National Congress, had been using the farm as a hideout. Among others, Nelson Mandela had moved onto the farm in October 1961 and evaded security police while masquerading as a gardener and cook called David Motsamayi (meaning "David the walker").

"The Rivonia raid was a stunning and welcome development for most white South Africans—a major breakthrough in the nation's fight against terrorism."[3] 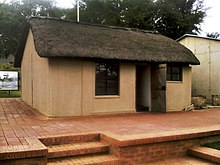 The thatched room at Liliesleaf Farm

Men such as Walter Sisulu, Govan Mbeki and other high commanders of uMkhonto we Sizwe (MK) said on their previous meeting that on the 11th of July they will hold their last meeting in the farm the agenda would be Mayibuye and the new place for their next meetings.
Nelson Mandela was already imprisoned on 5 August 1962; on 11 July at their last meeting at 3:00 pm Lionel Bernstein, Denis Goldberg, Arthur Goldreich, Bob Hepple, Abdulhay Jassat, Ahmed Kathrada, Govan Mbeki, Raymond Mhlaba, Andrew Mlangeni, Moosa Moolla, Elias Motsoaledi, Walter Sisulu and Harold Wolpe were all arrested by South African Police. Other key leaders such as Oliver Tambo, Moses Kotane, Joe Slovo, Moses Mabhida, Stephen Dlamini, Joe Modise, Alfred Nzo, Wilton Mkwayi and others were not at the farm at the time of the arrests.
The arrest of the MK high command members resulted in them being sentenced to life imprisonment, to others being arrested and to others going into exile.

Goldberg, Bernstein, Wolpe, Kantor, and Goldreich were Jewish South Africans; Hepple was of English descent on his father's side and Dutch and Jewish on his mother's;[4][5] Jassat, Kathrada, Moolla were Indian Muslims; Mandela, Mbeki and Mhlaba were Xhosa people; Motsoaledi and Mlangeni were Sothos and Sisulu was Xhosa (he had an English father and a Xhosa mother).[6]

The leaders who were prosecuted in the Rivonia Trial also included Mandela, who was already in Johannesburg's Fort prison serving a five-year sentence for inciting workers to strike and leaving the country illegally. Most of the Rivonia defendants were to be convicted, and in turn sentenced to life imprisonment.

The government took advantage of legal provisions allowing for accused persons to be held for 90 days without trial, and the defendants were held incommunicado. Withstanding beatings and torture, Goldreich, Jassat, Moolla and Wolpe escaped from jail on 11 August.[citation needed] Their escape infuriated the prosecutors and police, who considered Goldreich to be "the arch-conspirator".[citation needed]

The chief prosecutor was Dr. Percy Yutar, deputy attorney-general of the Transvaal.

The presiding judge was Dr. Quartus de Wet, judge-president of the Transvaal. 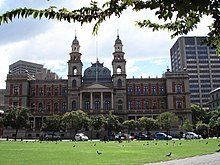 The Palace of Justice in Pretoria, site of the trial

The first trial indictment document listed 11 names as the accused.[7] The trial began in October 1963.[1][8][9] Counsel for the accused successfully challenged the legal sufficiency of the document, with the result that Justice de Wet quashed it.[10] Prior to dismissal of the first indictment, the state withdrew all charges against Bob Hepple, Hepple subsequently fled the country, without testifying, and stated "that he never had any intention of testifying".[1][8][11] The second indictment thus only listed 10 out of the original 11 names, referring to them as Accused 1 through 10:

Mlangeni, who died on 21 July 2020, was the last surviving Rivonia defendant following the death of Goldberg on 29 April same year.[13]

Nat Levy was attorney of record in Pretoria for Mandela and the other accused, with the exception of Kantor.[14] The defence team comprised Joel Joffe, who was the instructing attorney, Bram Fischer, Vernon Berrangé, Arthur Chaskalson and George Bizos.[15] Hilda Bernstein (wife of Rusty Bernstein) approached Joffe after being rebuffed by other lawyers who claimed to be too busy or afraid to act for her husband. Joffe was subsequently also approached by Albertina Sisulu (wife of Walter Sisulu), Annie Goldberg (mother of Dennis Goldberg) and Winnie Mandela (wife of Nelson Mandela). Joffe agreed to act as attorney for all of the accused except Kantor, who would require separate counsel, and Bob Hepple.[16][17]

Joffe initially secured the services of advocates Arthur Chaskalson and George Bizos, then persuaded Bram Fischer to act as lead counsel. Vernon Berrangé was also later recruited to join the team of advocates.[18] The defence line-up for the majority of the accused was:

The accused all agreed that Kantor's defence could share nothing in common with the rest of the accused. He thus arranged a separate defence team.[19] Denis Kuny (later counsel in the Bram Fischer trial), was involved at the beginning of the trial defending Kantor. After State Prosecutor Yutar accused him of having been on the mailing list of the Communist Party, Kuny was debriefed and forced to withdraw.[20] While Harold Hanson primarily represented Kantor, he was also invited to deliver the plea for mitigation for the other 9 accused.[21] The defence line-up for Kantor was:

"Production requirements" for munitions for a six-month period were sufficient, the prosecutor Percy Yutar said in his opening address, to blow up a city the size of Johannesburg.[22]

Kantor was discharged at the end of the prosecution's case.

The trial was condemned by the United Nations Security Council and nations around the world, leading to international sanctions against the South African government in some cases.

Main article: I Am Prepared to Die

At the beginning of the defence's proceedings, Nelson Mandela gave a three-hour speech from the defendant's dock, in which he explained and defended the ANC's key political positions. He justified the movement's decision, in view of the increasing restrictions on permitted political activity on the part of non-White Africans, to go beyond its earlier use of constitutional methods and Gandhian non-violent opposition to the state, embracing a campaign of sabotage against property (designed to minimize risks of injury and death), while also starting to train a military wing for possible future use. He also discussed in some detail the relationship between the ANC and the SACP, explaining that, while the two shared a commitment to action against the apartheid system, he was wedded to a model of constitutional democracy for South Africa (he singled out the British political model for particular praise), and also supported a market economy rather than a communist economic model. The speech is considered one of the founding moments of South African democracy.[24][25]

Mandela's closing words have been much-quoted. They were reportedly spoken looking the judge full in the eyes. His statement that he was prepared to die for the cause was strongly resisted by his lawyers, who feared it might itself provoke a death sentence. In a concession to their concerns, Mandela inserted the words "if it needs be". Nelson Mandela, speaking in the dock of the court on 20 April 1964, said:[26]

During my lifetime I have dedicated my life to this struggle of the African people. I have fought against white domination, and I have fought against black domination. I have cherished the ideal of a democratic and free society in which all persons will live together in harmony and with equal opportunities. It is an ideal for which I hope to live for and to see realised. But, my Lord, if it needs to be, it is an ideal for which I am prepared to die.

Although the prosecution did not formally request the death penalty, close observers of the trial considered such a sentence to be implicit in the prosecutor's presentation of his case.[22] Opposition to the death penalty included both public campaigns internationally and the defence's arguments within the courtroom. Harold Hanson was called upon to argue in mitigation. He compared the African struggle for rights to the earlier Afrikaans struggle, citing precedents for temperate sentencing, even in cases of treason. Eight defendants were sentenced to life imprisonment; Lionel Bernstein was acquitted. Unsubstantiated evidence suggests that Hanson, in a private hearing with de Wet, persuaded him to commute the death sentence for high treason to life imprisonment.

There was no surprise in the fact that Mandela, Sisulu, Mbeki, Motsoaledi, Mlangeni, and Goldberg were found guilty on all four counts. The defence had hoped that Mhlaba, Kathrada, and Bernstein might escape conviction because of the skimpiness of evidence that they were parties to the conspiracy, although undoubtedly they could be prosecuted on other charges. But Mhlaba too was found guilty on all counts, and Kathrada, on one charge of conspiracy. Bernstein, however, was found not guilty. He was rearrested, released on bail, and placed under house arrest. Later he fled the country.

Denis Goldberg went to Pretoria Central Prison instead of Robben Island (at that time the only security wing for white political prisoners in South Africa), where he served 22 years.

The Rivonia Trial was recorded on Dictabelts, a now obsolete audio recording format. Nearly 250 hours of the trial proceedings were recorded on 591 Dictabelts, kept by the National Archives and Records Service of South Africa (NARSSA). In 2001 seven of the Dictabelts were digitised by the British Library.[27] This included 'I am prepared to die' Nelson Mandela's statement from the dock.[28] In 2007 documents relating to the Criminal Court Case No. 253/1963 (State Versus N Mandela and Others) were recommended for inclusion in the Memory of the World Register in 2007.[29] In 2012 NARSSA approached the French Institute of South Africa (IFAS) and the French National Audiovisual Institute (INA) to start a process of digitisation and restoration of the rest of the Rivonia Trial sound archive. French engineer, historian and inventor, Henri Chamoux, took a little over 15 months to edit and digitize 230 hours of recording[30] using his own invention the Archeophone.

The digitised recordings were officially returned to South Africa, in 2018, as part of Nelson Mandela's Centenary, a one-day international colloquium "Listening to the Rivonia Trial : Courts, Archives and Liberation Movements" was organised to commemorate, discussing issues relating to the act of collecting, mapping, digitising and restoring archives and raising ethical questions that, in turn, become historical questions.