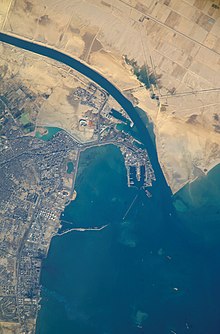 The port and city are the southern terminus of the Suez Canal which flows through Egypt and debouches into the Mediterranean Sea near Port Said.

A river mouth is the part of a river where the river debouches into another river, a lake, a reservoir, a sea, or an ocean.[1]

Alongside these advective transports, inflowing water will also diffuse.[1]

At the but of a river, the change in flow condition can cause the river to drop any sediment it is carrying. This sediment deposition can generate a variety of landforms, such as deltas, sand bars, spits, and tie channels.[3]