Richmond, population 3,232 (2016), is a town nestled amidst rolling farmlands on the Saint-François River between Sherbrooke and Drummondville, in the heart of Estrie in Quebec, Canada. 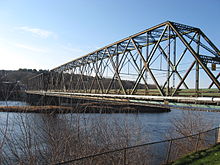 Originally settled by colonists from New England, Montreal and the Richelieu River valley circa 1798, Richmond is considered to be one of the oldest settlements in the former region of the Eastern Townships.

Richmond grew in importance during the 1800s when it became a key railway junction. The St. Lawrence and Atlantic Railroad opened between Montreal and Portland, Maine, on April 4, 1853 and was purchased four months later and absorbed into the Grand Trunk Railway (GTR)'s system. Two years later, the GTR opened a line from the mainline in Richmond northeast to Lévis to connect Montreal with Quebec City. The line was eventually extended further east to Rivière-du-Loup and a connection with the Intercolonial Railway, which operated trains on the GTR through Richmond to Montreal until 1897.

The town itself was first called Richmond in 1820, when a post office was inaugurated. By the 1860s Richmond was an important centre, with a college, literary institute and a public library.

Richmond's importance has waned since the 1930s, however, as the railways have also come to play a lesser role in the economy. The GTR was absorbed into the Canadian National Railways (CNR) and the line to Levis was abandoned in favour of more direct lines from Montreal to Quebec City. In 1989, CNR sold the entire railway line from Montreal to Portland, via Richmond, to a short line operator.

Richmond as it exists today was created on December 29, 1999 following the merger of the "old" town of Richmond on the right bank of the Saint-François and the village of Melbourne, located on the other side.

Origin of the name Richmond

Origin of the name Melbourne

The origin of the name Melbourne is uncertain, but the village is believed to have been named for Melbourne, Derbyshire or Melbourne, Hampshire.

Richmond has a humid continental climate[5] typical of southern Quebec. Precipitation is high year-round, resulting in warm to hot, humid summers and cold, snowy winters. There is a significant temperature difference between seasons as typical of the North American interior, with 25.8 °C (78.4 °F) as July high and −4.9 °C (23.2 °F) as the high for January.[6]