Not to be confused with Richmond Hill, Ontario.

Richmond is a village and former municipality within the city limits of Ottawa, Ontario, Canada.[1] Founded in 1818, it spans the Jock River, a tributary of the Rideau River. Like many communities in eastern Ontario, Richmond houses several unique populations. Some residents have historic and economic roots in the immediate area. Richmond operates as a small core to its residents. To others, the village serves as a bedroom community for the larger urban area of Ottawa. Richmond is 15 km from North Gower, 32 km from Carleton Place, 36 km from Downtown Ottawa, 41 km from Smiths Falls and 45 km from Perth. Its population at the Canada 2006 Census was 3,301.

After the War of 1812, loyal settlers were sought for Upper Canada (now Ontario). The United Empire Loyalists, who, after the American Revolution, had helped to settle areas further south and west in Upper Canada were being regarded with increasing suspicion. Instead, disbanded soldiers were the most immediate loyal settlers for this new era of development.

The village was originally laid out for the Government in 1817 by Major George Thew Burke, and settlement commenced as early as 1818. This was a military point for a number of years. The Duke of Richmond, then Governor General of Canada, died here in 1819 from the bite of a rabid fox, in a frame barn on Chapman's farm, about 4 miles from the village, on the Goodwood river. Later renamed the Jock River. The Masonic Arms Tavern, his abode on the previous night, was renamed Duke of Richmond Tavern in his honour. The village derives its name from the Duke of Richmond.[2]

Richmond was selected by the British Army in 1818 as one of the first military settlements. Others included Perth and Lanark. Named after the Duke of Richmond, who was the newly appointed Governor General of the Canadas, the village of Richmond was laid out in a grid on the north bank of the Jock River (which for a while was renamed the Goodwood after the Duke’s English estate). Richmond was the centre for the administration of lands in the area. Military supervisor, Major Burke, placed mainly Irish soldiers of his 99th Regiment in Goulbourn. Scottish settlers from Perthshire were placed in the adjoining area of northeast Beckwith, while Irish civilians were settled in southeast Beckwith, Goulbourn, and other parts of the neighbouring townships.

In the spring of 1818 the officers and men of 99th were at Quebec, and, in common with those of other regiments, had their choice of a passage home to Ireland or, if they so elected, to remain here in Canada where they would receive free grants of land in the new country to be settled on the Ottawa and Rideau rivers. Thus, in late 1818 (with the help of neighbours in Hull, Quebec assisting in construction) the village of Richmond was born. 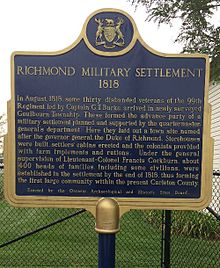 From 1818 to 1822, the village was managed by the Settling Branch of Upper Canada's Military Department. Village life was dominated by military culture and institutions during these early years. While official plans of the village demonstrate an optimism for its future growth and importance, this never came to pass. By the time the military relinquished control of the village in 1822, very few civilians had settled. Many historians argue that the highly planned villages of early nineteenth century Ottawa Valley were a failure compared to villages and towns that sprang up in a more "organic" nature in response to such factors as proximity to transportation routes, natural resources, and quality farm land. In the case of Richmond, the rising importance of Bytown and the building of the Rideau Canal several kilometres east of Richmond significantly contributed to its failure to thrive.[3] By 1832, Hamnett Pinhey described the state of Richmond to the Freeholders of Carleton as, "a jail in itself." He goes on to note that, "I have known that place these thirteen years, it was then a rising place, but it has been falling ever since, and is now almost nothing; not a house has been built but many a one has fallen down and still are falling... if you get into it in the Spring, you can't get out till Summer; and if you get into it in the Fall, you must wait till the Winter, and whose fault is it but the Magistrates and Gentry of Richmond; that is to say the Shopkeepers?"[4]

Richmond was incorporated as a village on the Goodwood river, in the east corner of the township of Goulbourn, 21 miles from Ottawa City, and 11 miles from the Ottawa river in 1850. For a number of years the trade and business was very active, but by the 1860s appears to have declined. By 1866, the village with a population of 600, contained several general stores, flouring mills and tannery; a grammar school, building of frame, W. Houghton, master. There were four churches-Church of England, built of stone, Rev. J. C. B. Pettit, rector; Church of Scotland, building of frame, Rev. Wm. P. White, minister; Wesleyan Methodist, building of frame; and the Roman Catholic church, built of stone, Rev. Peter O'Connell, parish priest.[5]

It was annexed by Goulbourn Township in 1974. In 1969, Richmond became part of Regional Municipality of Ottawa-Carleton until 2001. It has been within the City of Ottawa since January 1, 2001 as one of the many rural villages recognized by the City of Ottawa. Each of these amalgamations has resulted in a significant reduction in democratic representation for villagers. Some residents in Richmond are displeased about the most recent amalgamation into the Ottawa city structure and would like to de-amalgamate along with other areas of rural Carleton County.

Richmond's amalgamation into the city of Ottawa is a cause for concern for many local residents. These concerns are represented by groups such as the Carleton County Landowners Association. Amalgamation has also gained the attention of several researchers concerned with sustainable community development and local governance. David Douglas' study of restructured rural communities points out that threats to local traditions and values, lack of local control over the restructuring process, and a marked decrease in democratic representation are some of the important issues that have been neglected through this process and which pose a significant threat to the health and liveability of amalgamated rural communities such as Richmond.[6] Contained within the City of Ottawa structure, Richmond is vulnerable to many of Douglas' concerns.

The village mascot is a fox, after a local legend relating to a rabid fox who is reported to have been responsible for spreading the disease to the Duke of Richmond. The disease developed rapidly and on 28 August 1819 he died in extreme agony.

The village of Richmond has many historical buildings such as St Philip's Church, which is the oldest church in the Catholic Archdiocese of Ottawa.

Popular sports in Richmond include baseball, soccer, curling, and ice hockey. The Rideau Trail runs through Richmond. The Ottawa-Carleton Catholic School Board runs an elementary school named St. Philip. The public Ottawa-Carleton District School Board operates an elementary school named Richmond Public School and a high school named South Carleton High School.[7] Residents can take RR 10 in travelling to Carleton Place, Perth, or Smith Falls. They may also take the Highway 416, To Prescott or Ottawa. Richmond Road also meanders to downtown Ottawa. Richmond has a Scout Troop. The village has limited bus service to Ottawa through the 283 OC Transpo.

The village houses a limited selection of shops and services including a LCBO, banks, drugstore, grocer, and several restaurants.

On August 11, 2014, Richmond residents woke to the news that the Richmond Bakery, a local landmark for citizens, closed its doors suddenly after 75 years in business. The bakery was well-known in the Ottawa area for its old-fashioned doughnuts, fresh bread and Chelsea buns and many took to Twitter to recount their memories of childhood trips to the bakery.[8]

The owner stated that challenges he faced trying to find experienced bakers was the reason for closing.[9]

According to the Goulbourn Township Historical Society, the original bakery started in the late 1800s when Sam Wright came from Kemptville and opened a bakery business on Strachan Street.[10] The article, which recounts the History of the Richmond Bakery was originally published in Richmond 150 a book published in 1968 for the 150th anniversary of the Village of Richmond and goes on to say that the original bakery was sold in 1900 to Sam Wright, who operated the business until 1926. In 1930, Harold Brown rented a bakeshop and opened the Richmond Bakery on McBean Street which had a wood-fired brick oven, a few utensils and a kerosene lamp for lighting because there was no electricity. All the water was hand pumped from a well and carried to the bakery. Bread sold for 3 cents a loaf to retailers, who in turn sold it for 5 cents and the baker usually worked 16 hours per day. To deliver the bread, Mr. Brown borrowed horses from the local farmers and fed the horses in return. Drivers had to feed the horses at 4 a.m. and usually didn’t finish deliveries until 7 p.m. covering 20–25 miles per day. After being discharged from the RCAF in 1945, Mr. Brown opened another bakery in Richmond on McBean Street. Although it had electricity and trucks to do the deliveries, water still had to be pumped by hand and carried to the bakery. In 1952, Mr. Brown moved the Richmond Bakery to the corner of McBean and Perth Streets and new equipment was purchased including, gas and oil ovens, revolving trays and a bread steamer. Water was finally pumped into the bakery with an electric pump. At the new location, Mr. Brown added pastries which became one of the attractions of the bakers. On Sundays, Ottawa residents would drive to Richmond to purchase the sweet treats. The Bakery’s motto has always been, “We bake everything we sell and we sell everything we bake.”

After it closed its doors, CBC News in Ottawa[11] reported that many people arrived on Sunday only to discover that the bakery door was locked and there was a sign in the window which said “Sorry Closed! Thank you for all your support over the years! Joe”. According to the CBC Ottawa news report, the Richmond Bakery was what the village was known for and when it closed you could see trays of baked goods still on the shelves. An employee of the store stated that when costs were rising for raw ingredients they tried to expand the business but they couldn’t find experienced bakers to fill the extra volume of orders. The employee went on to say that other small town bakeries that produce goods from scratch may succumb to the same fate, that the cost of producing fresh goods from scratch rather than selling frozen goods is getting too expensive and that independent bakers are a dying trade.

According to information available from Statistics Canada,[12] 30% of small and medium sized independent bakeries in Canada were not profitable in 2011 citing operational expenses (materials) and wages as the largest expenses.

On the Ottawa Citizen comments page,[13] people from all over North America, who had either come from the Ottawa area or visited over the years recounted their memories of driving out to Richmond on a Sunday to get chocolate doughnuts, cookies and other treats or their traditions of going to the bakery for cakes for family events since the 1960s.