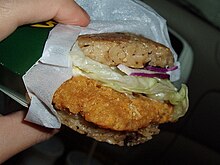 A rice burger or riceburger is a variation on the traditional hamburger with compressed rice cakes substituted for the hamburger buns.[1] The MOS Burger fast-food restaurant chain introduced the rice burger in 1987,[2][3] and it has become a popular food item in East Asia. Beginning around 2005 McDonald's also offered a rice burger in some of its Asian stores, with mixed results.[4][5] In South Korea they are known as "bapburgers" (bap/bab means rice in Korean language). Popular Korean-style rice burgers include fillings such as Stir-fried kimchi and tuna with mayonnaise.[6]