The university had an enrolment of over 8,000 students in the 2015 academic year, of whom just over 3,600 lived in 51 residences on campus, with the rest (known as Oppidans) taking residence in digs (off-campus residences) or in their own homes in the town.

View of High Street looking west from the corner of Hill Street towards the Drostdy Arch, the main entrance to the present-day Rhodes University campus. Circa 1898. 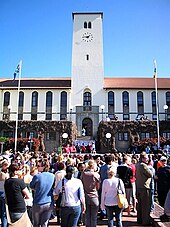 Although a proposal to found a university in Makhanda had been made as early as 1902, financial problems caused by the Frontier Wars in the Eastern Cape prevented the proposal from being implemented. In 1904 Leander Starr Jameson issued £50 000 preferred stock to the university from the Rhodes Trust. With this funding Rhodes University College was founded by an act of parliament on 31 May 1904.[8]

At the beginning of 1905, Rhodes moved from cramped quarters at St Andrew's to the Drostdy building, which it bought from the British Government. Rhodes became a constituent college of the new University of South Africa in 1918 and it continued to expand in size. When the future of the University of South Africa came under review in 1947, Rhodes opted to become an independent university.

Rhodes University was inaugurated on 10 March 1951. Sir Basil Schonland, son of Selmar Schonland, became the first Chancellor of his alma mater, and Dr. Thomas Alty the first Vice-Chancellor. In terms of the Rhodes University Private Act, the University College of Fort Hare was affiliated to Rhodes University. This mutually beneficial arrangement continued until the apartheid government decided to disaffiliate Fort Hare from Rhodes. The Rhodes Senate and Council objected strongly to this, and to the Separate University Education Bill, which they condemned as interference with academic freedom. However, the two bills were passed, and Fort Hare's affiliation to Rhodes came to an end in 1959. Nevertheless, in 1962 an honorary doctorate was conferred on the State President C.R. Swart, who (as Minister of Justice after 1948) had been responsible for the repression of opposition political organisations. The award caused the resignation of the Chancellor, Sir Basil Schonland, although his reasons were not made public at the time.[10]

James Hyslop succeeded Alty in 1963. In 1971, Rhodes negotiated to purchase the closed teacher training college run by the sisters of the Community of the Resurrection of our Lord including the buildings and grounds and a number of adjacent buildings, facilitating further expansion.

The original Rhodes Coat of Arms 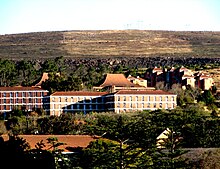 Kimberley Hall is currently one of nine halls on campus.

During 2008 work began on construction of a new library building at a cost of R85 million, one of the largest infrastructure projects undertaken by the university, and was completed in 2010.

Rhodes has six faculties, listed below:

The six faculties are further subdivided into 30 academic departments, of which 11 form part of the humanities faculty. The humanities faculty, being the largest in the university, consists of 40% of the student intake of undergraduate and postgraduate studies, enrolling 2669 students as of 2009.[11]

Rhodes University operates a Law Clinic, which operates as a firm of attorneys providing training to law students and free legal services for indigent people.[12] The Law Clinic operates from two offices, one in Makhanda and one in Komani. The Law Clinic came to national attention in July 2013 when it represented 15 members of Nelson Mandela's family in their litigation against Mandla Mandela (Nelson Mandela's grandson) concerning the location of family grave sites.[13][14]

Rhodes is a small, highly residential university. For most undergraduates, first and second years of study are done while living in campus residences.[citation needed]

Rhodes' academic program operates on a semester calendar, beginning in early-February to early-June, and the second semester beginning in late-July and ending late-November.

The tables below show the racial and gender composition of the university for that year.

Rhodes holds fourteen of the national research chairs appointed under the South African Research Chairs Initiative. This accounts for approximately 7% of the total awarded nationally in South Africa, a significant proportion given the University's small size.[18]

There are three student newspapers, Activate, The Oppidan Press and Cue, which has been published daily during the National Arts Festival held in Makhanda every year for several decades. Activate celebrated its 65th birthday in 2012, while The Oppidan Press was only first published in 2007 with its target readership being mainly Oppidans. The journal Philosophical Papers is edited in the department of philosophy.

In 2011, the Webometrics Ranking of World Universities ranked the Rhodes 5th in South Africa and 700th in the world.[20]

In academia, Old Rhodian Max Theiler was awarded the Nobel Prize in Physiology or Medicine for his research in virology in 1951.[21]

One of the most well-known departments on the Rhodes campus is the university's school of Journalism and Media Studies, through which many of South Africa's most notable media celebrities have passed. There are also an especially high number of radio celebrities who graduated at Rhodes – many of them having spent time with the university's campus radio station Rhodes Music Radio.

The University's name references Cecil Rhodes, a British businessman who heavily aided British imperial interests in South Africa, which led to controversy starting in 2015. Protests held that year by Rhodes Must Fall led to the University of Cape Town removing a statue of Rhodes, and similar protests against Rhodes' legacy occurred at Rhodes University. Some students and outlets started referring to it as "The University Currently Known As Rhodes".[25][26] In 2015 the University council undertook to determine whether or not the institution should change its name, as well as consider several other ways it could deal with the issues.[27]

In 2017, the Rhodes University Council voted 15–9 in favour of keeping the existing name.[28][29] While the university agreed with critics that "[it] cannot be disputed that Cecil John Rhodes was an arch-imperialist and white supremacist who treated people of this region as sub-human", it also said it had long since distanced itself from the person and had distinguished itself with the name Rhodes University as one of the world's best. The main argument against the change was financial, as such a change would cost a significant amount of money and the university was already having trouble with its budget. Furthermore, changing the university's name could have an adverse effect on its recognition internationally.[30]