The Rhinoceros Party (French: Parti Rhinocéros) is a Canadian federal-level satirical political party, referred to in English Canada as the Second Rhinoceros Party. It was known as neorhino.ca until 2010, when the party changed names and registered a new party logo. It was created in Montreal on May 21, 2006, and recognized by Elections Canada as being eligible for registration on August 16, 2007, and an official political party on August 23, 2007.[2] It is the successor to the Rhinoceros Party of Canada.

The party was founded by François "Yo" Gourd, who was involved with the original incarnation of the First Rhinoceros Party. He has said that he named the new party (then under the name "neorhino") for the Rhinoceros Party and for Neo, the Matrix character.[3] The party is led by Sébastien Côrriveau[4] (who used the names "Sébastien CôRhino Côrriveau" and "Sébastien CoRhino" when running in the 2015 and 2019 federal elections, respectively[5][6]).

It promises, like its predecessor, not to keep any of its promises if elected.[7]

The Rhinoceros Party (French: Parti Rhinocéros) was a registered political party in Canada from the 1960s to the 1990s. Operating within the tradition of political satire, the Rhinoceros Party's basic credo, their so-called primal promise, was "a promise to keep none of our promises".[8] They then promised outlandishly impossible schemes designed to amuse and entertain the voting public.[9]

The Rhinos were started in 1963 by Jacques Ferron,[10] "Éminence de la Grande Corne du parti Rhinocéros". In the 1970s, a group of artists joined the party and created a comedic political platform to contest the federal election. Ferron (1979), poet Gaston Miron (1972) and singer Michel Rivard (1980) ran against Prime Minister Pierre Trudeau in his Montreal seat.

The party claimed to be the spiritual descendants of Cacareco, a Brazilian rhinoceros who was "elected" member of São Paulo's city council in 1958, and listed Cornelius the First, a rhinoceros from the Granby Zoo, east of Montreal, as its leader.[11] It declared that the rhinoceros was an appropriate symbol for a political party since politicians, by nature, are: "thick-skinned, slow-moving, dim-witted, can move fast as hell when in danger, and have large, hairy horns growing out of the middle of their faces".[12]

The party used as its logo a woodcut of a rhinoceros by Albrecht Dürer, with the words D'une mare à l'autre (a French translation of Canada's Latin motto a mari usque ad mare, playing on the word mare, which means pond in French[14]) at the top.

In addition to the national platform promises released by the party leadership, individual candidates also had considerable freedom to campaign on their own ideas and slogans. Bryan Gold of the Rhinoceros Party described the party platform as two feet high and made of wood: "My platform is the one I'm standing on". A candidate named Ted "not too" Sharp ran in Flora MacDonald's Kingston and the Islands riding with the campaign slogan "Fauna, not flora", promising to give fauna equal representation.[15] He also took a stand on abortion (promising, if elected, never to have an abortion) and capital punishment: "If it was good enough for my grandfather, then it's good enough for me". To strengthen Canada's military, Sharp planned to tow Antarctica north to the Arctic Circle: "Once we have Antarctica, we'll control all of the world's cold. If another Cold War starts, we'll be unbeatable".[16]

In the 1988 election, the Rhinoceros Party ran a candidate named John Turner in the same riding as Liberal leader John Turner, and received 760 votes.[17] Penny Hoar, a safe sex activist, distributed condoms in Toronto while running under the slogan: "Politicians screw you — protect yourself".[18]

Other platform promises of the Rhinoceros Party included:

The Rhino Party also declared that, should they somehow actually win an election, they would immediately dissolve and force a second election: "We Rhinos think that elections are so much fun, we want to hold them all the time".[37] They also declared victory after one election, claiming all candidates were Rhinoceroses, whether they knew or acknowledged it: thick-skinned, short-sighted, mean-tempered, etc.

Michel Rivard once went on television (during free air time given to political parties) and stated: "I have but two things to say to you: Celery and Sidewalk. Thank you, good night".

In the 2019 Canadian federal election, the Rhinoceros Party ran a candidate named Maxime Bernier in the riding of Beauce against the incumbent Maxime Bernier, leader of the People's Party of Canada.[39] Neither of the Maxime Berniers won, both being defeated by Conservative Party candidate Richard Lehoux.[40]

The Rhinoceros Party never succeeded in winning a seat in the House of Commons. In the 1984 federal election, however, the party won the fourth-largest number of votes, after the three main political parties, but ahead of several well-established minor parties. Rhino candidates sometimes came in second in certain ridings, humiliating traditional Canadian parties in the process. In the 1980 federal election, for instance, the Rhinoceros party nominated a professional clown/comedian named Sonia "Chatouille" Côté ("chatouille" means "Tickles" in French) in the Laurier riding in Montréal. Côté came in second place, after the successful Liberal candidate, but ahead of both other major parties: the third place New Democrat, and the fourth-place Progressive Conservative candidate.[41] Chatouille received almost twice as many votes as the PC candidate.

Early in the party's history, when it was mainly composed of French-speaking Québécois, they chose their only unilingual anglophone party member as their official translator.

(1) The Rhinoceros Party ran 12 candidates in the 1972 election, but was not recognized as a registered party by Elections Canada, and therefore its candidates were listed as independents. (Source: Toronto Star, October 31, 1972.)

The party abstained from the 1993 federal election while they questioned the constitutionality of new rules that required the party to run candidates in at least 50 ridings at a cost of $1,000 per candidature.[43] On September 23, 1993, Canada's Chief Electoral Officer, Jean-Pierre Kingsley, refused to accept the party's abstention and ordered the removal of the Rhinoceros Party from the Registry of Canadian Political Parties, effectively eliminating them from the Canadian political system. Kingsley also directed the party's official agent, Charlie (le Concierge) McKenzie, to liquidate all party assets and return any revenues to the Receiver General of Canada. On instructions from the party, McKenzie refused. After two years of threatening letters, Ottawa refused to prosecute McKenzie, who now claims to hold the distinction of being Canada's "least-wanted fugitive".

In 2001, Brian "Godzilla" Salmi, who received his nickname because of the Godzilla suit he wore while campaigning, tried to revive the Rhinoceros Party to contest the British Columbia provincial election. While they pulled some pranks that earned some media coverage, only two of its candidates (Liar Liar in Vancouver-Mount Pleasant and Helvis in Vancouver-Burrard) appeared on the ballots, as the party claimed the $1000 candidate registration fee was a financial hardship. Unregistered candidates included Geoff Berner, who received national wire service coverage for promising "cocaine and whores to potential investors".[44] The party disbanded shortly thereafter.

Salmi later legally changed his name to Sa Tan.[45] In 2007, Salmi filed a lawsuit against the federal government of the election rules that led to the disbanding of the Rhinoceros party, demanding $50 million compensation. As Salmi's name is now legally "Sa Tan", the lawsuit was filed under the name Sa Tan versus Her Majesty The Queen.[7]

François Gourd, a prominent Rhino, later started another political movement, the entartistes, who attracted attention in the 1990s by planting cream pies in the faces of various Canadian politicians.[46] In 2006, he led a group that set up Neorhino.ca in an attempt to recapture the Rhinoceros Party spirit,[47] and ran as a Neorhino candidate in the 2007 Outremont by-election.

Other Rhinoceros Party members founded the Parti citron (Lemon Party), which attempted to bring a similar perspective to provincial politics in Quebec.[26]

After the party's dissolution, a number of independent election candidates informally claimed the Rhinoceros Party label even though the party itself no longer existed. There were also a number of unsuccessful attempts to revive the Rhinos as a legally incorporated political party, though this was not fully achieved until Neorhino.ca.

On August 7, 2007, Brian Salmi, then-president of the Rhinoceros Party, announced a $50-million lawsuit contesting an election reform law that had stripped his party of its registered status in 1993.

Legally changing his name to Sa Tan, he had planned to run under the Rhino banner in the September 2007 by-election. However, a previous law from 1993 stated that registered parties must run candidates in at least 50 ridings, at a cost of $1,000 per riding, to keep their status. In protest of the new law, the party planned to abstain from the election. Canada's then-chief electoral officer, Jean-Pierre Kingsley, rejected the abstention and ordered the party removed from the registry of Canadian political parties. The lawsuit was filed as a result of the removal from the national party registry by Mr. Kingsley. Since Salmi had legally changed his name, the lawsuit was filed as Sa Tan vs. Her Majesty The Queen.

The lawsuit was dropped after the ruling of the chief electoral officer was reversed in a new law passed in 2004 that said a party only had to run one candidate in a federal election or federal by-election to be considered registered.[7]

The party changed from neorhino.ca to its new formal name of the Rhinoceros Party in mid-2010. It also registered a new logo with Elections Canada. 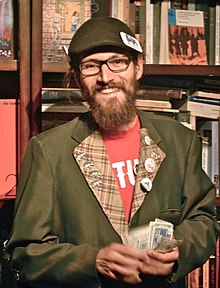 Sébastien CoRhino Corriveau, leader of the Rhinoceros Party since 2014, shown here in 2019.

The election of 2015 was very long : it started in beginning August to end on October 19. On August 17, Sébastien CôRhino declared in Montréal he was willing to nationalize Tim Hortons and privatize the Royal Canadian Army at the same time : "We'll look at the results after five years, after 10 years, after 50 years and with the results of these studies we'll be able to determine if other economic sectors should also be nationalized or be privatized." Montreal candidate Ben 97 also publicly announce he wants to move the capital to Kapuskasing, Ontario. That would bring democracy closer to Canadians, because Kapuskasing is in the center of Canada.[51][52]

If elected, the Rhinoceros Party of Canada has promised to: