Reykjavík Airport (Icelandic: Reykjavíkurflugvöllur) (IATA: RKV, ICAO: BIRK) is the main domestic airport serving Reykjavík, the capital of Iceland, located about 2 kilometres (1.2 mi) from the city centre. Having shorter runways than the city's bigger Keflavík International Airport, which is sited 50 kilometres (31 mi) out of town, it only serves internal flights within Iceland and to Greenland, small international charters, transatlantic ferry flights and private flights. It can also serve as alternate airport for flights inbound towards Keflavík, in case of adverse weather conditions there. To distinguish from the larger Keflavík International Airport outside Reykjavík, it is sometimes unofficially in English called Reykjavik City Airport (also by the airport administration),[5] and also Reykjavik Domestic Airport,[6] but also Reykjavík international Airport[7] because it has some international flights but mostly domestic ones.

Reykjavík Airport is the main hub of Air Iceland Connect and Eagle Air. Of the airport's three runways, two are currently active all-year round. The shortest runway, 06/24, is usually used only in winter, and takeoffs from 06 (northeast direction) are forbidden because of safety and noise. Reykjavík Airport is owned and operated by the state enterprise Isavia. 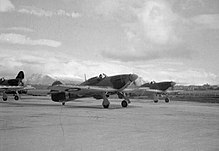 The first flight from the airport area was 3 September 1919, with the takeoff of an Avro 504, the first aeroplane in Iceland. Until 1937, there were experiments with airline operations in Vatnsmýri, but with the foundation of Iceland's oldest airline, Flugfélag Akureyrar (now Icelandair) in Akureyri in 1938, operations began in the area and in March 1940 scheduled flights started when Flugfélag Akureyrar moved its hub from Akureyri to Reykjavík (and changed its name to Flugfélag Íslands).

The current airport was built by the British Army during World War II on the south coast of the Reykjavík peninsula. Construction began in October 1940, when the airport had only a grass surface. The Black Watch regiment built the first runway, constructing it over sunken oil barrels. The British Royal Air Force operated from the airport, then named RAF Reykjavik, from March 1941. On 6 July 1946, the British handed the airport operation over to the Icelandic government and since then it has been operated by the Icelandic Civil Aviation Authority (now Flugstoðir).

Renovation of the airport started in 2000 and lasted two years. This was followed by a referendum in 2001, with 49.3% of the votes for moving the airport out of the city centre, and 48.1% votes for it remaining in place until 2016, when the current urban plan expires. The outcome of these elections on the other hand was not binding because election participation was under 40% and the left wing majority made the decision to have such a clause for it to be binding and beyond that because these elections were not held properly in respect to certain legal technicalities that also resulted in no option for non-election day voting (for vacationers for example)[citation needed].

There are some local city buses at both terminal buildings.

BSÍ, located near the airport, 1.6 km (1.0 mi) from the main airport terminal, is a major bus terminal. At the bus terminal, Strætó bs provides bus service to areas around Reykjavik while Gray Line Iceland Excursions' Airportexpress and Reykjavik Excursions Kynnisferðir's Flybus services connect between Keflavík International Airport and Reykjavik Airport. When changing between domestic and international flights a 50 km bus transfer between Reykjavík Airport and Keflavík International Airport is usually needed, and at least three hours between flights is recommended.