Marxists see revolutionary waves as evidence that a world revolution is possible. For Rosa Luxemburg, "The most precious thing… in the sharp ebb and flow of the revolutionary waves is the proletariat's spiritual growth. The advance, by leaps and bounds, of the intellectual stature of the proletariat affords an inviolable guarantee of its further progress in the inevitable economic and political struggles ahead."[4]

The phrase "revolutionary wave" has also been used by non-Marxist writers and activists, including Justin Raimondo and Michael Lind, to describe discrete revolutions happening within a short time span.[5][6]

Central and subordinate revolutions may support each other militarily, as for example the USSR, Cuba, Angola, Ethiopia, Nicaragua and other Marxist regimes did in the 1970s and 1980s.[9]

A further dimension to Katz's typology[10] is that revolutions are either against (anti-monarchy, anti-dictatorial, anti-communist, anti-democratic) or for (pro-fascism, pro-communism, pro-nationalism etc.). In the latter cases, a transition period is often necessary to decide on the direction taken.

There is no consensus on a complete list of revolutionary waves. In particular, scholars disagree on how similar the ideologies of different events should be in order for them to be grouped as part of a single wave, and over what period a wave can be considered to be taking place – for example, Mark N. Katz discussed a "Marxist-Leninist wave" lasting from 1917 to 1991, and a "fascist wave" from 1922 to 1945, but limits an "anti-communist wave" to just the 1989 to 1991 period.[11] 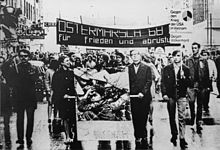 Protests against the Vietnam War in Vienna, Austria, 1968

Mark Katz theorises that Buddhism (in Sri Lanka, Thailand, Indochina, Burma, Tibet) and Confucianism (to replace Marxism in China and promote unity with Chinese in Taiwan, Hong Kong, Singapore, Malaysia) might be the revolutionary waves of the future. In the past, these religions have been passively acquiescent to secular authority; but so was Islam, until recently.[18]