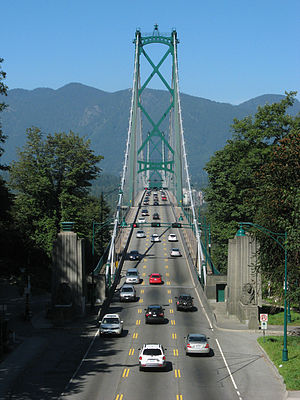 The south end of Lions Gate Bridge in Vancouver, Canada

A reversible lane (British English: tidal flow) is a lane in which traffic may travel in either direction, depending on certain conditions. Typically, it is meant to improve traffic flow during rush hours, by having overhead traffic lights and lighted street signs notify drivers which lanes are open or closed to driving or turning.

Reversible lanes are also commonly found in tunnels and on bridges, and on the surrounding roadways – even where the lanes are not regularly reversed to handle normal changes in traffic flow. The presence of lane controls allows authorities to close or reverse lanes when unusual circumstances (such as construction or a traffic mishap) require use of fewer or more lanes to maintain orderly flow of traffic.

Some more recent implementations of reversible lanes use a movable barrier to establish a physical separation between allowed and disallowed lanes of travel. In some systems, a concrete barrier is moved during low-traffic periods to switch a central lane from one side of the road to another; some examples are the five-lane San Diego-Coronado Bay Bridge in San Diego, California, the former seven-lane Tappan Zee Bridge on the Hudson River in New York and the eight-lane Auckland Harbour Bridge across the Waitematā Harbour in Auckland, New Zealand. Other systems use retractable cones or bollards which are built into the road, or retractable fences which can divert traffic from a reversible ramp. The two center lanes of the six-lane Golden Gate Bridge are reversible; they are southbound during morning rush hour and northbound at evening rush hour. Prior to the installation of a movable median barrier in January 2015, they were demarcated by vertical yellow markers placed manually in sockets in the roadway.

Many urban freeways have entirely separate carriageways (and connecting ramps) to hold reversible lanes (the reversible lanes in such a configuration are often referred to as "express lanes"). Generally, traffic flows in one direction or another in such a configuration (or not at all); the carriageways are not "split" into two-lane roadways during non-rush periods. Typically, this sort of express lane will have fewer interchanges than the primary lanes, and many such roadways only provide onramps for inbound traffic, and offramps for outbound traffic.

Historically, the term "suicide lane" has also referred to a lane in the center of a highway meant for passing in both directions.[1] Neither direction has the right-of-way, and both directions are permitted to use the lane for passing. In a similar layout, three lanes are striped with two in one direction and one in the other, but traffic in the direction with one lane is allowed to cross the centerline to pass.

2+1 roads have replaced some of these, mainly in Europe. 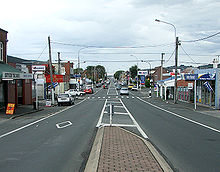 A typical five-lane arterial equipped with a center turn lane. These are often found in cities, towns and developed areas near cities. In the United States, the sequence line is located on the inside of the lane (sometimes with left turn arrows for both flows[2]). In Canada it is the same for all provinces with the exception of Ontario, where the sequence line is located on the outside.

Another type of center two-way lane is a "two-way left turn lane" (TWLT) or "center left-turn lane", or (for countries that drive on the right) "center turn lane" or "median turn lane", a single lane in the center of the road into which traffic from both directions pulls to make a left turn. While this is sometimes also called a "suicide lane", it is actually far safer,[3] as traffic collisions occur at far lower speeds.

These roads are very common in suburban areas and less common in rural areas, though they are frequent around developed areas near Interstate Highway bypasses in the United States. Many were divided highways before the median was demolished or otherwise replaced by the turn lane. Many four-lane streets with a center double yellow line are being phased out in favor of 3- or five-lane streets with center turn lanes because the center lane allows for less disruption of traffic flow.[4] For routes with moderate traffic, other movements involve downgrading four-lane undivided streets to three-lane streets with a turn-only center lane.

This center lane can be used by emergency vehicles like police cars, ambulance, and fire trucks to avoid traffic traveling in either direction. Drivers are not allowed to use the center lane of such a highway for passing slow-moving vehicles, except when funding or space constraints dictate use of it as a rush hour "travel lane" when traffic is largely asymmetric between a central business district and its suburbs. U.S. Route 13 near the Greenville, North Carolina, city limits is a rare instance of a posted warning sign that states "do not pass in center lane".

No (or minimal) lane controls

Lane controls and no (or minimal) physical separation

In shopping centres and metro stations there may be an odd number of escalators, with one or more escalators running in different directions in different time of a day.