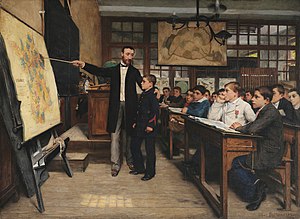 La Tache Noire by Albert Bettannier, painted in 1887 depicting French students being taught about the lost provinces of Alsace-Lorraine, taken by Germany in 1871.

Revanchism (French: Revanchisme, from revanche, "revenge") is the political manifestation of the will to reverse territorial losses incurred by a country, often following a war or social movement. As a term, revanchism originated in 1870s France in the aftermath of the Franco-Prussian War among nationalists who wanted to avenge the French defeat and reclaim the lost territories of Alsace-Lorraine.[1]

Revanchism draws its strength from patriotic and retributionist thought and is often motivated by economic or geopolitical factors. Extreme revanchist ideologues often represent a hawkish stance, suggesting that their desired objectives can be achieved through the positive outcome of another war. It is linked with irredentism, the conception that a part of the cultural and ethnic nation remains "unredeemed" outside the borders of its appropriate nation-state.[2]

Revanchist politics often rely on the identification of a nation with a nation state, often mobilizing deep-rooted sentiments of ethnic nationalism, claiming territories outside the state where members of the ethnic group live, while using heavy-handed nationalism to mobilize support for these aims. Revanchist justifications are often presented as based on ancient or even autochthonous occupation of a territory since "time immemorial", an assertion that is usually inextricably involved in revanchism and irredentism and justifies them in the eyes of their proponents.

The instance of revanchism that gave these groundswells of opinion their modern name came in the 1870s. French revanchism was a deep sense of bitterness, hatred and demand for revenge against Germany, especially because of the loss of Alsace and Lorraine following defeat in the Franco-Prussian War.[3][4] Paintings that emphasized the humiliation of the defeat came in high demand, such as those by Alphonse-Marie-Adolphe de Neuville.[1] 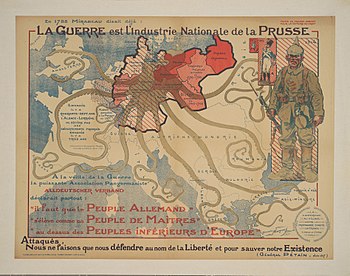 A French propaganda poster from 1917 portrays Prussia as an octopus stretching out its tentacles vying for control. It is captioned with an 18th-century quote: "Even in 1788, Mirabeau was saying that War is the National Industry of Prussia."

Georges Clemenceau, of the Radical Republicans, opposed participation in the scramble for Africa and other adventures that would divert the Republic from objectives related to the "blue line of the Vosges" in Alsace-Lorraine. After the governments of Jules Ferry had pursued a number of colonies in the early 1880s, Clemenceau lent his support to Georges Ernest Boulanger, a popular figure, nicknamed Général Revanche, who it was felt might overthrow the Republic in 1889. This ultranationalist tradition influenced French politics up to 1921 and was one of the major reasons France went to great pains to woo the Russian Empire, resulting in the Franco-Russian Alliance of 1894 and, after more accords, the Triple Entente of the three great Allied powers of World War I: France, Great Britain, and Russia.[5]

French revanchism influenced the Treaty of Versailles of 1919 following the end of World War I, which restored Alsace-Lorraine to France and extracted reparations from the defeated Germany. The conference was not only opened on the anniversary of the proclamation of the "Second Reich", the treaty also had to be signed by the new German government in the same room, the Hall of Mirrors.

A German revanchist movement developed in response to the losses of World War I. Pan-Germanists within the Weimar Republic called for the reclamation of the property of a German state due to pre-war borders or because of the territory's historical relation to Germanic peoples. The movement called for the reincorporation of Alsace-Lorraine, the Polish Corridor and the Sudetenland (see Bohemia, Moravia, Silesia—parts of the Austrian Empire and Austria-Hungary until its dismemberment after World War I). Those claims, supported by Adolf Hitler, led to World War II, with the invasion of Poland. This irredentism had also been characteristic of the Völkisch movement in general and of the Pan-German League (Alldeutscher Verband). The Verband wanted to uphold German 'racial hygiene' and were against breeding with in their eyes inferior races like the Jews and Slavs.[6]

The concept of ethnographic Lithuania clashed with the right for self-determination of people living in that large territory, particularly Poles and Belarusians, who, according to the supporters of the ethnographic Lithuania, were "Slavicized Lithuanians" who needed to be re-Lithuanized. They argued that individuals cannot decide on his ethnicity and nationality and that it is related to not their language but their ancestry.

In the 1920s and 1930s, Poland was trying to reclaim ethnic Polish lands that had been occupied by German, Russian and Austro-Hungarian empires:

Poland counted herself among the revisionist powers, with dreams of a southward advance, even a Polish presence on the Black Sea. The victim of the revisionist claims of others, she did not see the Versailles frontiers as fixed either. In 1938 when the Czech state was dismembered at the Munich conference, Poland issued an ultimatum of her own to Prague, demanding the cession of the Teschen region; the Czech government was powerless to resist.[7]

Sweden lost Finland to Russia at the conclusion of the Finnish War (1808-09), ending nearly 600 years of Swedish rule. For most of the rest of the 1800s there was talk, but few practical plans and little political will, of reclaiming Finland from Russia. Since Sweden was never able to challenge Russia's military might on its own, no attempts were made.

During the Crimean War in 1853 to 1856, the Allied nations initiated talks with Sweden to allow troop and fleet movements through Swedish ports to be used against Russia. In return, the Allies would help Sweden reclaim Finland with the help of an expeditionary force. In the end, the plans fell through and Sweden never became involved in the fighting.

The Treaty of Trianon: Kingdom of Hungary lost 72% of its land and 3.3 million people of Hungarian ethnicity.

The idea of Greater Hungary is associated with Hungarian revisionism, targeting at least to regain control over Hungarian-populated areas in Hungary's neighbouring countries. The outcome of the Treaty of Trianon of 1920 is to this day remembered in Hungary as the Trianon trauma.[8] According to a study, two-thirds of Hungarians agreed in 2020 that parts of neighbouring countries should belong to them.[9]

Some Mexican nationalists consider the Southwestern United States to be Mexican territory that must be returned.[10][11] The territory belonged to Mexico until being ceded to the United States in the Texas annexation (1845) and the Mexican Cession (1848), as a consequence of the Mexican–American War.

The annexation of the Crimean peninsula by the Russian Federation in April 2014, together with accusations by Western and Ukrainian leaders that Russia is supporting separatist actions by ethnic Russians in the secessionist Donbass region, has been cited by a number of prominent media outlets in the West as evidence of a revanchist policy on the part of the Kremlin and Russian President Vladimir Putin.[12][13]

Some Russian nationalists consider Alaska to be Russian territory that must be returned.[14] Alaska was legally sold to the US by Russia in 1867.

Argentina considers the British-controlled Falkland Islands to be part of the Tierra del Fuego Province. In 1994, Argentina's claim to the territories was added to its constitution.[15]

Spain ceded Gibraltar to Britain under the terms of the Treaty of Utrecht of 1713. Spain's claim to Gibraltar became government policy under the regime of the dictator Francisco Franco and has remained in place under successive governments following the Spanish transition to democracy.[16]