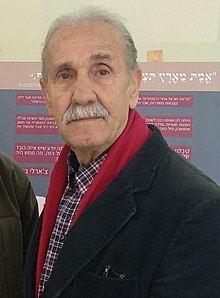 Reuven Abergel was born in 1943 in Rabat, Morocco. He immigrated to Israel with his parents and seven siblings (he was the fourth eldest child) from Rabat, Morocco. The family was sent to the immigrant tent camp in Pardes Hana. Later they moved to the seamline Jerusalem neighborhood of Musrara, a former Palestinian neighborhood whose residents vacated in the 1948 War.

In response to the Wadi Salib riots in Haifa, Abergel began to distribute leaflets around his neighborhood. He joined the Israeli Black Panthers following the arrest of his friends. He became a leader of the movement and his home became its headquarters. He was present at the group's meeting with then-Prime Minister Golda Meir.[1][2][3] Since then Abergel has been active in the struggle for social justice and peace in Israel/Palestine as a member of various groups and movements. He currently serves on the board of the Mizrahi Democratic Rainbow Coalition and was elected to the leadership of Tarabut ("connection"), a joint Jewish-Palestinian political party for peace and equality in Israel.