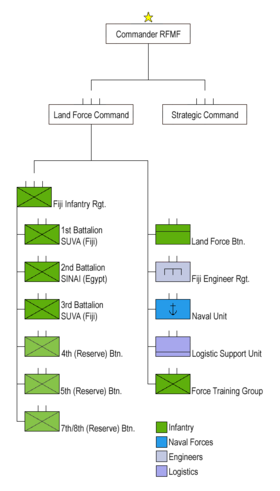 Structure of the military of Fiji

The Republic of Fiji Military Forces (RFMF) is the military force of the Pacific island nation of Fiji. With a total manpower of 3,500 active soldiers and 6,000 reservists, it is one of the smallest militaries in the world, though most of its surrounding island nations have no militaries at all. The Ground Force is organised into six infantry and one engineer battalions, with approximately 6,000 reserves. There was formerly one "Zulu" company of counter-revolutionary specialists, which was deactivated in late 2000 due to a mutiny by some of its members.

The first two regular battalions of the Fiji Infantry Regiment are traditionally stationed overseas on peacekeeping duties; the 1st Battalion has been posted to Lebanon, Iraq, Syria, and East Timor under the command of the UN, while the 2nd Battalion is stationed in Sinai with the MFO. Peacekeepers income represents an important source of income for Fiji. The 3rd Battalion is stationed in the capital, Suva, and the remaining three are spread throughout the islands.

The Republic of Fiji Navy was formed in 1975, following the government's ratification of the United Nations Law of the Sea convention. The Navy is responsible for maritime needs in border control, such as watching over Fiji's exclusive economic zone and organising task and rescue missions. It currently operates 9 patrol boats. Military aid is received from Australia, the People's Republic of China, and the United Kingdom (although the latter has suspended aid as a result of the 2006 military coup against the civilian government).

Speaking at 30th anniversary celebrations on 26 July 2006, Commander Bradley Bower said that the greatest challenge facing the navy of a maritime country like Fiji was to maintain sovereignty and the maritime environment, to acquire, restore, and replace equipment, and to train officers to keep pace with changing situations.

In January 2019 five of Fiji's naval vessels were operational.[14] In 2020 Australia will provide two new Guardian-class patrol vessels to replace the three vessels it provided over thirty years ago. In December 2019 Fiji took delivery of RFNS Volasiga, boosting the number of operational vessels to six.[15] The Guardian class patrol vessel RFNS Savenaca was officially handed over to Fijian officials, in Henderson, Australia, on March 6, 2020.[16][17][18] 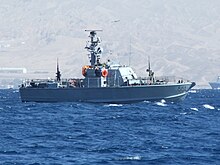 The Air Wing of the Republic of Fiji Military Forces, founded in 1987, had a base at the airport in Nausori, but was abolished in 1997. Yehonatan Shimʻon Frenḳel writes that the "Air Wing was formed after the 1987 coup, when the French provided two helicopters as part of its military aid package."[19] Frenkel goes on to say that the air wing was disbanded after both helicopters crashed and after subsequent revelations of huge debts incurred as a result of the aircraft.

The two helicopters were:

The Air Wing did not have its own roundel or ensign and its only marking was the national flag used as a fin flash.[20]

A Boeing 707-339 was reportedly used by the Fiji UN ambassadors, it operated in Pakistan International Airlines markings with Royal Fiji Military Forces titles near the front passenger door.[citation needed]

Rank designation based on the British tradition.[21][22]

The rank insignia for commissioned officers for the army and navy respectively.

The rank insignia for enlisted personnel for the army and navy respectively.

Fiji's military has a history of political intervention.[23] In 1987, soldiers were responsible for two military coups, and in 2000, the military organised a countercoup to quash George Speight's civilian coup. Since 2000, the military has had a sometimes tense relationship with the Qarase government, and has strongly opposed its plans to establish a Commission with the power to compensate victims and pardon perpetrators of the coup. Among other objections, the military claims that its integrity and discipline would be undermined if soldiers who mutinied in the 2000 upheaval were to be pardoned.

On 4 August 2005, Opposition Leader Mahendra Chaudhry called for more Indo-Fijians, who presently comprise less than one percent of the military personnel, to be recruited. (Specifically, as of October 2007, Fiji's military had 3527 full-time members, of whom only 15 were Indo-Fijians.[24]) This would help guarantee political stability, he considered. He also spoke against government plans to downsize the military. Military spokesman Lieutenant Colonel Orisi Rabukawaqa responded the next day by saying that the military was not an ethnic Fijian body, that it stood to serve the entire nation, and that there was no colour bar in its recruitment or promotion. He said that many Indo-Fijians had been reluctant to commit themselves to a military career because of the slow progress of promotion, often preferring to be discharged and to use their record as a stepping stone to a successful career in some other field. Nevertheless, he appreciated the Indo-Fijian contribution to the military, and noted the success of Lieutenant Colonel Mohammed Aziz, the head of the military's legal unit who was a pivotal figure in the court martial of soldiers who mutinied in 2000. Ironically the rate of promotion of indigenous Fijian officers had been very rapid after the 1987 coup, and subsequent expansion of the Republic of Fiji Military Forces.

On 26 August 2005, the government announced plans to study ways to reduce the size of the military. Military engineers would be transferred to the Regional Development Ministry, said Home Affair Minister Josefa Vosanibola, and the reduction of the military forces would coincide with an increase in the numbers of the police force.

On 26 September 2005, Rabukawaqa revealed that the military had decided to curtail certain operations to stay within its budget. The cuts would affect maritime patrols, search and rescue operations, training and exercises, School Cadet training, and the deployment of military engineers to rural areas. These cuts would be made to ensure that activities accorded a higher priority, such as peacekeeping operations in the Sinai Peninsula and Iraq, officer cadet training with the New Zealand Defence Forces, and the prosecution of soldiers charged with mutiny, would not be affected, Rabukawaqa said.

The next day, Lesi Korovavala, chief executive officer of the Ministry of Home Affairs, told the Fiji Village news service that the military had undertaken the reductions on its own initiative, in consultation with the department, an explanation corroborated by Lieutenant Colonel Rabukawaqa.

On 5 December 2006, the Fijian army staged a third coup d'état. On 7 February 2008, the head of the RFMF and post-coup interim Prime Minister Voreqe Bainimarama stated: "Qarase [...] does not understand the role of the Military and as such is misinforming the nation. [...] [I]f there are practices and policies which have potential to undermine the national security and territorial integrity of Fiji, the RFMF has every right under the Constitution to intervene."[25] In August 2009, with Bainimarama still controlling the government as prime minister and the constitution abrogated, Ratu Epeli Nailatikau, a former military commander, was appointed acting president on the retirement of Iloilo.

The Military of Fiji has always had a close relationship to Fiji's churches, particularly the Methodist Church, to which some two-thirds of indigenous Fijians belong.

Fiji sent 54 individuals to Australia, to help fight wildfires there.[28]