Renfrew is a town on the Bonnechere River in Renfrew County, Ontario, Canada. Located one hour west of Ottawa in Eastern Ontario, Renfrew is the third largest town in the county after Petawawa and Pembroke. The town is a small transportation hub connecting Highway 60 and Highway 132 with the Trans-Canada Highway. Renfrew is also known historically for its role in the formation of the National Hockey League. It lies about 5 kilometres from the Quebec border, about 10 kilometres by road. Renfrew makes most of Canada’s hockey tape.

Named after Renfrewshire, Scotland, in approximately 1848,[2] Renfrew was settled largely in part due to logging in the area in the early 19th century, where the river was used in order to drive the lumber to locations such as Ottawa. This heritage was until recently celebrated every July with the Lumber Baron Festival. 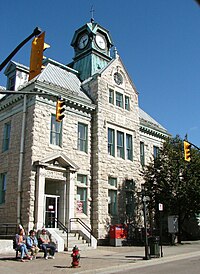 Much of Renfrew's current prosperity can be attributed to its status as an economic centre for a surrounding rural region with a population of over 30,000. Renfrew is also an important stop for Ottawa-based cottagers and outdoor enthusiasts passing by on their way to nearby whitewater rafting, boating, camping, hunting, golfing, fishing, snowmobiling, down-hill skiing, and cross-country skiing. However, the area's largest single employers are the Renfrew Victoria Hospital and the Bonnechere Manor.[11] In addition to numerous small employers, there are also several manufacturing facilities employing several hundred people; Scapa Tapes Renfrew (formerly Renfrew Tape) makes products such as hockey tape that is used across North America and the duct tape brand featured on the discontinued Red Green Show and promoted by Doug Gilmour in the early 1990s after becoming a member of the Toronto Maple Leafs. Times Fibre Canada and Madawaska Hardwood Flooring also have manufacturing facilities in town. Haley Industries located outside Renfrew near Haley Station is also a major employer in the area. Renfrew is also home to many successful small businesses. Between 2000 and 2005, a major portion of Renfrew's retail business, and the associated customer services jobs, shifted from the west-end Renfrew mall (now demolished) to its east-end industrial park near Highway 17 due to the opening of several major big-box such as No Frills and Walmart and smaller retail stores.

Residents of the area await the twinning of Highway 17 to improve traffic flow and the safety of the highway due to numerous accidents along the corridor to North Bay, Ontario.

Despite the apparent prosperity, Statistics Canada reported the average earnings of Renfrew residents in 2000 as $35,811, or roughly 31% lower than the provincial average and 5% lower than the county average.[12] Further, the town reports, relative to the population size and compared to the province as a whole, fewer positions in management, business, finance, administration and natural or applied sciences, while there was greater than the provincial rates of occupation in sales and service, trades, transport and equipment operators, processing, manufacturing and utilities.[12]

Low Square is located on Raglan Street in downtown Renfrew. The square is a park setting containing the cenotaph, and the Town Hall. The land was donated by the Honourable Thomas Low as a gift to the city for the purpose of constructing a cenotaph to honour local soldiers who died in The Great War. The Renfrew Police station (later the OPP detachment) was built on the back of the square in 1972, with a new town hall constructed in the 1980s. The police moved out of this building in February 2017 to a new location at 450 O'Brien Road.

The McDougall Mill Museum on the Bonnechere River

John Lorn McDougall, politician and fur trader, built the mill in 1855 by the Bonnechere River near the town landmark Swinging Bridge and overlooking natural rapids below the Renfrew Power Generation generating station. It has been converted into a museum, sometimes referred to as 'Renfrew Museum', not to be confused with museums of that name in Pennsylvania and Scotland. The McDougall Mill Museum houses pioneer tools and machinery, a military section, a doll exhibit, as well as toys, Victorian clothing and household items.[15] 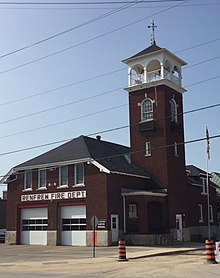 In 1885, the W.H. Kearney family built a wire bridge across the Bonnechere River. The “swinging bridge”, now a town landmark made of wood and cable, is far safer and more secure than the original plank and wire structure. 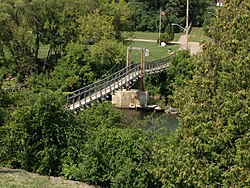 Reconstructed in 1983 by the Town of Renfrew and updated in 2015, it is one of three swinging bridges in Canada and provides an excellent view of the Bonnechere River and the power generation plant. 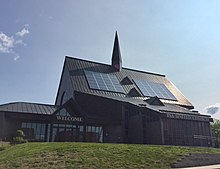 The Victoria Hospital School of Nursing opened in 1902 with a capacity of 30 students, graduating 10 students per year. Nursing education moved under the jurisdiction of community colleges and the school was subsequently closed in 1965.

The Town of Renfrew is policed by the Ontario Provincial Police force.

Chief Bernard "Barney" McDermott had the job as Chief of Police in Renfrew from 1890 until his retirement in 1909 - he was a one man police force and was known to always "get his man". His living quarters were situated above the fire hall in Renfrew.

The Renfrew Police station (later the OPP detachment) was built on the back of Low Square in 1972.

The OPP operated out of their Stewart Street location from 1967 until moving into the Low Square detachment when the Town of Renfrew police service amalgamated with the OPP in 2000. The Renfrew and Arnprior detachments, who both faced the same fate of losing their own town operated forces, had their OPP detachments amalgamated in January 2013, and in February 2017, a new regional detachment was opened at 450 O'Brien Road in Renfrew. This new Renfrew detachment serves the towns of Arnprior, Renfrew, and the townships of Greater Madawaska, McNab-Braeside, Admaston-Bromley, Horton and about half of Whitewater Region Township.

The Renfrew Public Library had rather simple beginnings; a group of residents discussing the latest philosophies and varied topics in William Dickson's cobbler shop which opened up in 1845 near the current location of the post office. After gathering up a few books in 1852, Mr. Dickson, Mr. Archie Thompson, and local lawyer, Mr. Elkanah Billings formed the Renfrew Mechanics Institute and Library Association, which lasted for about fifteen years before being revitalized in 1870 by a new group of people. By the end of the century, the Institute emerged as a newly formed Public Library Board and the books were moved to the Barnet Block at 282 Raglan Street, above what was James Clark's drugstore. The current building located at 13 Railway Avenue, was opened in 1920 with financial support from the Carnegie Institute, and in 1959, the Children's Library was established in the completely renovated basement. In the 1980s, the library became wheelchair accessible by an addition at the east and south side of the building, which also expanded the research and reading area into the second floor of the adjacent building at 161 Raglan Street.

One of the four original teams in the National Hockey Association, the precursor to the NHL, was based in Renfrew. The Renfrew Creamery Kings sought to be allowed to play in the Eastern Canada Amateur Hockey Association, but with no success. The team's owner, M. J. O'Brien, eventually financed and put together his own league, the NHA. The Creamery Kings played two seasons of hockey in the NHA, 1911 and 1912, until M. J. O'Brien pulled out to pursue his interests in the railway.[17]

Renfrew Timberwolves is the town's hockey team since 1987, but the team can trace its roots back to 1968 as the Renfrew Lions or Renfrew Junior Timberwolves. The current team plays in the Central Canada Hockey League Tier 2.