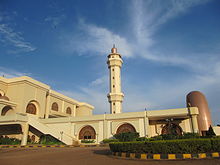 The Gaddafi National Mosque is one of the largest mosques in Sub-Saharan Africa.

Uganda is a religiously diverse nation with Christianity being the most widely professed faith. According to the 2014 census, over 84 percent of the population was Christian while about 14 percent of the population adhered to Islam, making it the largest minority religion.[1] In 2009, the northern and west Nile regions were dominated by Roman Catholics, and Iganga District in the east of Uganda had the highest percentage of Muslims.[2]

Freedom of religion is guaranteed by the Uganda Constitution, but religions are expected to be registered with the government. Some religions considered to be cults are restricted. The Catholic Church, the Church of Uganda, the Eastern Orthodox Church in Uganda, and the Uganda Muslim Supreme Council are registered under the Trustees Incorporation Act. Most other religious groups are registered yearly as non-governmental organizations.[2]

According to the national census of 2014, Christians of all denominations comprised 85 percent of Uganda's population.[5] The Roman Catholic Church had the largest number of adherents (39.3 percent of the total population). The largest Protestant church was the Anglican Church of Uganda, a part of the worldwide Anglican communion, at 32 percent. The category of Pentecostal/Evangelical/Born Again made up 11.1% of the population, while Seventh-Day Adventists made up 1.7%, Baptists 0.3% and Eastern Orthodox 0.1%.[5],although some souurces estimate their numbers to more than 3%[6]

Jehovah's Witnesses operate in Uganda under the International Bible Students Association name and are working in a total of ten languages, including Swahili and Luganda. Followers of William M. Branham and Branhamism claim numbers in the tens of thousands, thanks in large part to translation and distribution efforts by Voice of God Recordings.[7]

The Church of Jesus Christ of Latter-day Saints claims more than 14,000 members in 27 congregations in Uganda. They also have two family history centers.[8]

The Society of Friends has two yearly meetings, Uganda Yearly Meeting, part of Friends United Meeting and Evangelical Friends Church. There were about 3,000 members between the two in 2001.[9]

A 2015 study estimated some 35,000 believers in Christ from a Muslim background residing in the country at the time.[10]

According to the 2014 National Census, 13.7 percent of Ugandans adhered to Islam.[5] Most Muslims are Sunni,[2] with a large minority of Ahmadis.[11] The Iganga District in the east of Uganda has the highest percentage of Muslims.[2]

Main article: History of the Jews in Uganda

There are a small community of Ugandan Jews called the Abayudaya, numbering some 2,000-3,000.[12] The group was formed by Semei Kakungulu in the early 20th century.[13]

Uganda has received media attention for interfaith efforts in Mbale. Founded by JJ Keki, the Mirembe Kawomera (Delicious Peace) Fair Trade Coffee Cooperative brings together Muslim, Jewish, and Christian coffee farmers. Members of the cooperative use music to spread their message of peace. The Smithsonian Folkways album "Delicious Peace: Coffee, Music & Interfaith Harmony in Uganda" features songs from members of the cooperative about their interfaith message.[15] 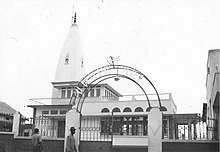 A temple in Jinja.

Only 0.7 percent of Uganda's population are classified as "Other Non-Christians", including Hindus.

The Bahá'í Faith in Uganda started to grow in 1951 and in four years time there were 500 Bahá'ís in 80 localities, including 13 Bahá'í Local Spiritual Assemblies, representing 30 tribes, and had dispatched 9 pioneers to other African locations.[16] Following the reign of Idi Amin when the Bahá'í Faith was banned and the murder of Bahá'í Hand of the Cause Enoch Olinga and his family,[17] the community continues to grow though estimates of the population range widely from 19,000 to 105,000 and the community's involvements have included diverse efforts to promote the welfare of the Ugandan people. One of only seven Bahá'í Houses of Worship in the world, known as Mother Temple of Africa, is located on the outskirts of Kampala.

The Uganda Buddhist Centre, founded in 2005 by Venerable Buddharakkhita, is a major initiative in the heart of Africa that intends to provide the first stable source of Buddhism in Uganda.[18]

Only 0.9 percent of Ugandans claim no religion. The Uganda Humanist Association is a member of the International Humanist and Ethical Union and has been registered since 1996.[19]