The religious identities of the people of Paraguay, have since national independence been oriented towards Christianity, and specifically the Catholic Church. In the most recent census (2002) Paraguayans of all ages 10 and older had their religious identities enumerated, and 89.6% were classified as Catholics. According to a 2018 unofficial estimate the share of Catholics in Paraguay has slightly dropped to 88%.

Self-identification of Paraguayans with no established religion is quite low by worldwide standards with only 1.14% of respondents enumerated as possessing no religious identity, this leads Paraguay to be classified as the most religious country in South America.[2]

After centuries of Christian missionary activity, identification with the traditional indigenous faiths of the Paraguay region is even less, with 0.61% of respondents enumerated as possessing an indigenous religious identity.

According to article 27 of the Paraguayan Constitution of 1992, freedom of religion is recognised and there is no official religion. Relations between the State and the Catholic Church are to be based on independence, co-operation and autonomy. The independence of religious organisations is guaranteed.[3]

As can be seen below, the majority of Paraguayans are Roman Catholic, although the percentage of Paraguayans who identify themselves as Catholic has dropped slightly. There has been a corresponding growth in the influence of Evangelical churches in recent years. There are a number of Indigenous religions and there are also Buddhist (probably due to immigration from Korea), Jewish and Muslim communities in the country.

Religions in Paraguay according to 2002 and 1992 censuses 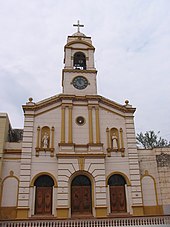 Catholic Chapel in Concepción. Christianity is the main religion in Paraguay.

Metropolitan Cathedral of Our Lady of the Assumption in Asunción.

Catholicism has a played a major role in shaping Paraguay's culture. Catholicism has long been the most important religion in Paraguay, with the Bishopric of Asunción created in 1547.[6] The majority of government officials are Catholics and a number of Catholic festivals are public holidays (Holy Thursday, Good Friday, Feast of The Assumption of the Virgin Mary [15 August], Feast of The Immaculate Conception [8 December] and Christmas).[7]

Many people mark the Feast of the Immaculate Conception with a pilgrimage to Caacupé . The Basilica of Caccupe contains a statuette of Our Lady of the Miracles. Pope John Paul II visited Caacupe in 1987.

The second largest religious affiliation in Paraguay is Protestantism, which like in North America shows a wide array of denominations. Lutherans and Mennonites are the more traditional groups which are dominated by rather recent immigrants of European ancestry and their descendants, while Evangelical and/or Charismatic churches have spread in recent decades mostly in the vast and long-established Mestizo population. The Bruderhof established a base in Paraguay in 1941, fleeing Nazi persecution.[8] They left the country for North America in 1966, but returned and re-established themselves in 2010.[9]

Main article: The Church of Jesus Christ of Latter-day Saints in Paraguay

When Brazil decided to halt Japanese immigration in the 1930s, a Japanese land company built an agricultural settlement southeast of Asunción. Two more colonies near Encarnación followed in the 1950s; many Japanese settlers came from neighboring Bolivia. These immigrants brought buddhism with them. Until the 1960s most retained their buddhist faith, but since then many have converted to Christianity. Today there are roughly 2,000 practicing buddhists.

Main article: History of the Jews in Paraguay

The first synagogue in Paraguay was established in 1917 by Sephardic Jews who had emigrated from Palestine, Turkey and Greece; though there had previously been some isolated Jewish settlers from Europe.[11]

Ashkenazi Jews from the Ukraine and Poland founded the Unión Hebraica in the 1920s, while in the 1930s between 15,000 and 20,000 refugees from Germany, Austria and Czechoslovakia fled to Paraguay to escape the holocaust. Many of these later moved on to Argentina, Uruguay and Brazil. Those who remained were later joined by immigrants who were mostly survivors of the concentration camps.[11]

Today, the Jewish community has around a 1000 members who live mainly in Asunción. There is a Jewish school Escuela Integral Estado de Israel. Asunción has three synagogues: Ashkenazi, Sephardi and Chabad and a Jewish museum.[11]

The 1992 census recorded 872 Muslims in Paraguay, 486 of which were in the Alto Parana department, the capital of which is Ciudad del Este. There are also communities in Asunción and Itapua (the capital of which is Encarnación).[4] As in other parts of Latin America, many of these are descended from immigrants from Syria and Lebanon, though some may also be from Bangladesh and Pakistan[12]

The Bahá'í Faith in Paraguay begins after `Abdu'l-Bahá, then head of the religion, mentioned the country in 1916.[13] Paraguayan Maria Casati was the first to join the religion in 1939 when living in Buenos Aires.[14] The first pioneer to settle in Paraguay was Elizabeth Cheney late in 1940[15] and the first Bahá'í Local Spiritual Assembly of Asunción was elected in 1944.[15][16] By 1961 Paraguayan Bahá'ís had elected the first National Spiritual Assembly and by 1963 there were 3 local assemblies plus other communities.[17] Recent estimates of Bahá'ís mention 5500[18] or 13000[19] though the state Census doesn't mention the Bahá'ís.[20]