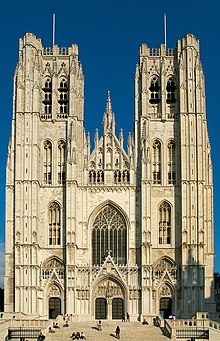 Cathedral of St. Michael and St. Gudula in Brussels.

An Antoinist temple in Nandrin. Antoinism is a 20th-century Christian new religious movement founded by a Belgian (Walloon).

Religion in Belgium is diversified, with Christianity, in particular the Catholic Church, representing the largest community, though it has experienced a significant decline since the 1980s (when it was the religion of over 70% of the population). However, according to the Eurobarometer poll carried out by the European Commission in December 2018, the share of Christians increased by 10% points from 52.5% in 2009 to 62.8% in 9 years, with Roman Catholicism being the largest denomination at 57.1%. Protestants comprised 2.3% and Orthodox Christians comprised 0.6%. Non religious people comprised 29.3% of the population and were divided between those who primarily identified as atheists (9.1%) or as agnostics (20.2%). A further 6.8% of the population was Muslim and 1.1% were believers in other religions.[3] On the other hand, the following Eurobarometer's survey done in May and published in September 2019 showed Christians decreased from 62.8% in 2018 to around 60% in 2019, with Catholics at 54%, Orthodox Christian 1%, Protestant 3%, other Christian 2%, Muslim-Shia 2%, Muslim-Sunni 2%, other Muslim 1%, Atheists 10%, non believers or Agnostics 21%, and other Religions 4%.[4]

Belgium's policy separates the state from the churches, and freedom of religion of the citizens is guaranteed by the country's constitution.

Some religious people dispute the precise figures, as it is unclear how many Belgians who say they believe in God are actually Christians and how many who call themselves Christians, but refuse the label "Catholic", have severed all links to the Catholic Church. Also in dispute are how many Catholic Belgians have become deists or have joined small Protestant churches. 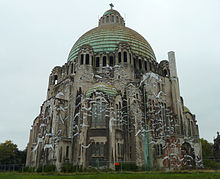 The imposing Church of the Sacred Heart and of Our Lady of Lourdes in Liège, desacralised and abandoned since 2010, stands as a glaring example of the decline of Christianity in contemporary Belgium.

Yunus Emre Mosque of the Turkish community of Belgium. 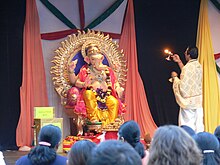 Ritual in honour of Ganesha held in Antwerp.

The Belgian constitution provides for freedom of religion, and the government generally respects this right in practice. However, government officials have the authority to research and monitor religious groups that are not officially recognised. There are a few reports of societal abuses or discrimination based on religious belief or practice, and some reports of discrimination against minority religious groups.

Belgian law officially recognizes many religions, including Catholicism, Protestantism, Anglicanism, Islam, Judaism, and Eastern Orthodoxy, as well as non-religious philosophical organizations (Dutch: vrijzinnige levensbeschouwelijke organisaties; French: organisations laïques).[7] Buddhism is in the process of being recognised under the secular organization standard. Official recognition means that priests (called "counsellors" within the secular organisations) receive a state stipend. Also, parents can choose any recognised denomination to provide religious education to their children if they attend a state school. Adherents to religions that are not officially recognised are not denied the right to practice their religion, but do not receive state stipends.

After attaining autonomy from the federal government in religious matters, the Flemish Parliament passed a regional decree installing democratically elected church councils for all recognised religious denominations and making them subject to the same administrative rules as local government bodies, with important repercussions for financial accounting and open government. In 2006, however, Catholic bishops still appointed candidates to the Catholic Church councils because they had not decided on the criteria for eligibility; they were afraid that candidates might be merely baptized Catholics. By 2008, however, the bishops decided that candidates for the church councils had only to prove that they were over 18, a member of the parish church serving the town or village in which they lived, and baptized Catholic.[8]

Belgium had thirteen Anglican churches as of 2012,[15] including the Pro-Cathedral of the Holy Trinity in Brussels. They are part of the Church of England's Diocese in Europe, and of the Convocation of Episcopal Churches in Europe.[16]

In 1566, at the peak of Belgian Reformation, there were an estimated 300,000 Protestants, or 20% of the Belgian population.[17] The Spanish reconquest of the Southern Netherlands in the Eighty Years' War prompted most of the Belgian Protestants to flee to the north or convert, causing the region to again be overwhelmingly Catholic. As of 2016, Protestantism represented 2.1% of the total population[3] and 2% of the working-age, internet connected population.[11] The Pew Research Center, an American think tank, proposes an even lower estimate at 1.4% of the total population.[18]

The Administrative Council of Protestant and Evangelical Religion in Belgium is a coordinating group that mediates between many Protestant groups and the government. The largest Protestant denomination is the United Protestant Church in Belgium, with some 138 affiliated churches.[15] 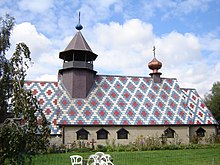 The Eastern Orthodox Church in Belgium is subdivided into several canonical jurisdictions:

In 2015, according to the Eurobarometer survey made by the European Commission, 5.2% of the total Belgian population was Muslim.[3] In a 2016 study Ipsos found that 3% of the working-age, internet connected Belgian population declaring to be believers in Islam.[11]

Yeunten Ling in Huy, a countryside castle turned into a monastery of Tibetan Buddhism.

Eurobarometer 2015 found only 0.2% of the total Belgian population declaring to be Buddhist.[3] Despite that, one year later Ipsos found that 2% of the working-age, internet connected Belgians were Buddhists.[11]

According to Ipsos, 1% of the working-age, internet connected Belgians declared that they believed in Confucianism.[11] This segment of the population may include many — if not all — the Chinese communities in Belgium.

Antoinism is a Christian-inspired new religious movement which was created by Louis-Joseph Antoine (1846–1912). It remains the only significant such movement to originate in Belgium and has adherents in France and elsewhere. 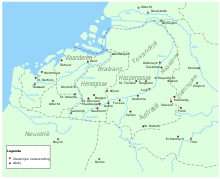 Southern part of the Low Countries with bishopry towns and abbeys, in about the 7th century.

Beguinage of Kortrijk, where the last one of the Beguines, a medieval Christian lay, semi-monastic order, died in 2013.

After the Roman period, Christianity was brought back to the southern Low Countries by missionary saints like Willibrord and Amandus. In the 7th century, abbeys were founded in remote places, and it was mainly from these abbeys that the Christianization process was started. This process was expanded under the auspices of the Merovingian dynasty, and later by Charlemagne, who even waged war to impose the new religion.

The Reformation Era was particularly influential in the confluence of currents that formed modern Belgium. In 1523, Belgium became the site of the first martyrdom of Lutherans by the Catholic Church, as two Augustinian monks, Johann Esch and Heinrich Voes, were burned at the stake in Brussels for their conversion to the Lutheran doctrine. Before the end of the century, however, Belgium was part of the Spanish Empire, which showed as little tolerance for complacent or liberal Catholics as for Protestants. One of the effects was that Catholics—fearing the Inquisition and preferring to live with Protestants who would, at least, tolerate them—migrated in large numbers to the Dutch Republic.

From the Spanish military conquest of 1592 until the re-establishment of religious freedom in 1781 by the Patent of Toleration under Joseph II of Austria, Catholicism was the only religion allowed, on penalty of death, in the territories now forming Belgium. However, a small number of Protestant groups managed to survive at Maria-Horebeke, Dour, Tournai, Eupen, and Hodimont.[21]

Religion was one of the differences between the almost solidly Catholic south and the predominantly Protestant north of the United Kingdom of the Netherlands, formed in 1815. The union broke up in 1830 when the south seceded to form the Kingdom of Belgium. In Belgium's first century, Catholicism was such a binding factor socially that it prevailed over the language divide (Dutch versus French). The decline in religion's importance as a social marker across late-20th-century Western Europe explains to a large extent the current centrifugal forces in Belgium, with language differences (increasingly reinforced by a positive feedback effect in the media) no longer being kept in check by a religious binding factor. If anything, the Catholic Church has acquiesced to these changes by having a Dutch-speaking university (Katholieke Universiteit Leuven) and a French-speaking university (Universite Catholique de Louvain).

Until the late 20th century, Catholicism played an important role in Belgian politics. One significant example was the so-called Schools' Wars (Dutch: schoolstrijd; French: guerres scolaires) between the country's philosophically left-wing parties (liberals at first, joined by Socialists later) and the Catholic party (later the Christian Democrats), which took place from 1879–1884 and from 1954–1958. Another important controversy happened in 1990, when the Catholic monarch, King Baudouin I, refused to ratify an abortion bill that had been approved by Parliament. The king asked Prime Minister Wilfried Martens and his government to find a solution, which proved novel. The government declared King Baudouin unfit to fulfill his constitutional duties as monarch for one day. Government ministers signed the bill in his place[22] and then proceeded to reinstate the king after the abortion law had come into effect. 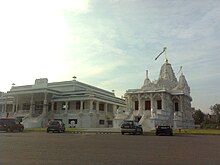 In 2002, the officially recognised Protestant denomination at the time, the United Protestant Church of Belgium[23] (consisting of around 100 member churches, usually with a Calvinist or Methodist past) and the unsubsidized Federal Synod of Protestant and Evangelical Churches (which had 600 member churches in 2008 but did not include all Evangelical and Charismatic groups outside the Catholic tradition) together formed the Administrative Council of the Protestant and Evangelical Religion (ARPEE in Dutch, CACPE in French). The council is now the accepted mouthpiece of Protestantism in all three linguistic communities of Belgium: Dutch, French, and German.

The 21st century has witnessed significant changes in the religious demography of Belgium, characterised by a rapid decline of Catholicism and the growth of other religions, some of them brought by waves of immigration from foreign countries, including Pentecostalism, Orthodox christianity, Islam, Hinduism, Buddhism and Chinese religions.