The regions of Iceland are mainly used for statistical purposes. The district court jurisdictions also follow these divisions. The postal code system follows the regions as well, with a few exceptions. Prior to 2003, the regions were also used as overall constituencies in certain parliamentary elections. Excluding its usage in collecting national statistics, particularly census data, these definitions rely upon the discontinued Reykjavík capital proper.[clarification needed]

In addition, the borders of the previous Reykjanes region, as defined by the government and regional authorities, have shifted, resulting in the loss of many municipalities to the newly formed Southern Peninsula area. Other major changes have also been included, such as the redistribution of over twenty subdivisions, most notably the transfer of the city of Höfn to the Eastern Region.

These regions are not defined by law and have no official standing or administrative function, but are used to divide Iceland for certain purposes. The country's healthcare program is divided into seven districts. These regions mostly correspond to those detailed below, although a few updates have yet to be fully implemented. For example, settlements in the Norðurland have suffered minor effects from the merger of the Northwest and Northeast into a single group. 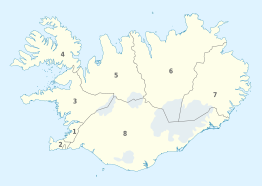 The regions of Iceland