Wingate was born at Port Glasgow, Renfrewshire (now Inverclyde), the seventh son of Andrew Wingate, a textile merchant of Glasgow, and Elizabeth, daughter of Richard Turner of Dublin. His father died when he was a year old, and the family, in straitened circumstances, moved to Jersey, where he was educated at St James's Collegiate School.[1]

He entered the Royal Military Academy, Woolwich, and was commissioned a lieutenant in the Royal Artillery on 27 July 1880.[2] He served in India and Aden from March 1881 to 1883, when he joined the 4th Battalion of the Egyptian Army[3] on its reorganisation by Sir Evelyn Wood with the brevet rank of major. In the Gordon Relief Expedition of 1884–1885 he was ADC and military secretary to Sir Evelyn.

After holding an appointment in England for a brief period as ADC to Wood, who was now General Officer Commanding Eastern District,[4] he rejoined the Egyptian Army in 1886[5] as assistant military secretary to Sir Francis Grenfell. He took part in the operations on the Sudan frontier in 1889, including the engagement at Toski and in the further operations in 1891, being present at the capture of Tokar. His principal work was in the intelligence branch,[6] of which he became assistant adjutant-general in 1888 and director in 1892. A master of Arabic, his knowledge of the country, the examination of prisoners, refugees and others from the Sudan, and the study of documents captured from the Dervishes enabled him to publish in 1891 Mahdiism and the Egyptian Sudan, an authoritative account of the rise of the Muhammad Ahmad and of subsequent events in the Sudan up to that date. In 1894 he was governor of Suakin. He was promoted to brevet lieutenant colonel on 18 November 1896.[7] 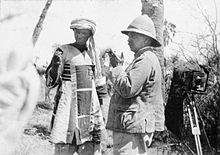 Wingate interrogating the defeated dervish commander Emir Mahmoud after the 1898 Battle of Atbara.

Largely through his assistance, Fathers Ohrwalder and Rossignoli, and two nuns escaped from Omdurman in 1891. Wingate also made the arrangements which led to the escape of Slatin Pasha in 1895. He translated into English Father Ohrwalder's narrative (Ten Years in the Mahdi's Camp, 1892) and Slatin's book (Fire and Sword in the Sudan, 1896).

As director of military intelligence he served in the campaigns of 1896–1898 which resulted in the reconquest of the Sudan, including the engagement at Firket, the battles of the Atbara and Omdurman and the expedition to Fashoda. He was again Mentioned in despatches for this work.[8] He briefly (March–June 1897) went to Abyssinia as second in command of the Rennell Rodd mission. For his services he was promoted brevet colonel and made an extra ADC to Queen Victoria on 17 December 1897,[9]. On 8 September 1898, he was promoted to the regimental rank of major.[10] Wingate was in command of an expeditionary force which in November 1899 defeated the remnant of the Dervish host at the Umm Diwaykarat, Kordofan, the khalifa being among the slain.

In December 1899, on Lord Kitchener being summoned to South Africa, Sir Reginald Wingate succeeded him as Governor-General of the Sudan and Sirdar of the Egyptian Army, being promoted to local major general on 22 December 1899.[11] His administration of the Anglo-Egyptian Sudan, between 1899 and 1916, achieved the colonial goals of the British Empire, with the colony regaining a degree of prosperity and its infrastructure being rebuilt and expanded. In 1909, at the request of the British government, Wingate undertook a special mission to Somaliland to report on the military situation in connection with the proposed evacuation of the interior of the protectorate. He was promoted general in November 1913. From 1916 to 1919 he was also commander of military operations in the Hedjaz.[12]

Wingate with British, Egyptian and Turkish royalty in 1911

In 1917, Wingate succeeded Sir Henry McMahon as High Commissioner in Egypt, a post he held until 1919. He was not a successful administrator in the very different political climate in that country, and was made a scapegoat for the riots incited by Saad Zaghlul and his party that spread across Egypt. Angry at his treatment, Wingate refused to actually resign, even after he was officially replaced by Lord Allenby, and threatened to embarrass the British Government. He was refused a peerage or another appointment, although he was created a baronet in the 1920 King's Birthday Honours,[13] gazetted as a Baronet, of Dunbar, in the County of Haddington, and of Port Sudan.[14] He never held another public or military office, retiring from the Army on 1 February 1922,[15] but became a director of a number of companies. He continued to hold honorary positions in the army: as Colonel Commandant, Royal Artillery and Honorary Colonel of the 7th Battalion Manchester Regiment (appointed 1914), of the 57th (Lowland) Medium Brigade, Royal Artillery (appointed in 1922), and of the 65th Anti-Aircraft Regiment Royal Artillery (6th/7th Battalion Manchester Regiment) (appointed in 1941, which he retained until 27 September 1949.)[16][17][18] [19]). For many years he was the senior general of the British Army.

Wingate married Catherine Rundle (later Dame Catherine Wingate) on 18 June 1888. He was the first cousin once removed to Orde Wingate, who led British commando units in Palestine, Sudan and Burma before and during the Second World War.

Wingate was succeeded in his baronetcy by his son Sir Ronald.

Wingate is commemorated in the scientific name of a species of lizard, Trachylepis wingati,[20] which is endemic to Ethiopia and Sudan.[21]