Indian reductions in the Andes Jesuit reduction Bolivia
For other uses, see Reduction. 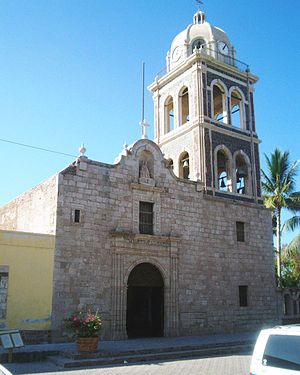 A cathedral was always at the center of the reductions, this one in Loreto, Baja California Sur.

Reductions or in Spanish reducciones, also called 'congregaciones', (Portuguese: redução, plural reduções) were settlements created by Spanish rulers in Spanish America and the Spanish East Indies (the Philippines). The Spanish relocated, forcibly in many cases, indigenous inhabitants of their colonies, (los indios) into settlements modeled on towns and villages in Spain. In Portuguese-speaking Latin America, reductions were also called aldeias.

The policy of reductions began on Caribbean islands in 1503. In the words of the Spanish rulers, "It is necessary that the Indians be assigned to towns in which they will live together and that they not remain or wander separated from each other in the backcountry."[citation needed] The Spanish ordered that Indian villages be destroyed and selected sites for new villages to be built. The concentration or reducción of the Indian population facilitated the Spaniards' access to Indian labor, the promulgation of Christianity, and the collection of taxes and tribute.[1] Moreover, the reduction of the Indians was intended to break down ethnic and kinship ties and detribalize the residents to create a generic Indian population.[2]

Main articles: Jesuit reduction and Indian reductions in the Andes

Indian reductions in the Andes, mostly in present-day Peru and Bolivia, began on a large scale in 1570 during the rule of Viceroy Francisco de Toledo. Toledo aimed, with some success, to remake the society of the former Inca empire and in a few years resettled about 1.4 million Indians into 840 communities, many of which are the nucleus of present-day cities, towns, and villages.[4] Probably the most famous of the reductions were in Paraguay and neighboring Argentina, Brazil, and Bolivia in the 17th and 18th centuries which were created and governed by the Jesuit order of the Catholic Church.[5]

In the Spanish Philippines, the Spanish colonial government founded hundreds of towns and villages across the archipelago modeled on towns and villages in Spain. The authorities often adopted a policy of reductions for the resettlement of inhabitants in far-flung scattered Barrios or barangays to move into a centralized cabecera (town/district capital) where a newly built church and an ayuntamiento (town hall) were situated.[6] This allowed the government to defend, control and Christianize the indigenous population, to conduct population counts, and to collect tributes.