Red Robin Gourmet Burgers and Brews, or simply Red Robin, is an American chain of casual dining restaurants founded in September 1969 in Seattle, Washington. In 1979, the first franchised Red Robin restaurant was opened in Yakima, Washington.[3] Red Robin's headquarters are in Greenwood Village, Colorado. As of August 2020, the company had over 570 restaurants in operation[4] with 90 being operated as a franchise.[5]

The original Red Robin stood at the corner of Furhman and Eastlake Avenues E. in Seattle, at the southern end of the University Bridge. This building dated from 1940 and was first called Sam's Tavern. The owner, Sam, sang in a barbershop quartet and could frequently be heard singing the song "When the Red, Red Robin (Comes Bob, Bob, Bobbin' Along)". He liked the song so much that he eventually changed the name to Sam's Red Robin.[6]

A Red Robin restaurant in 2015 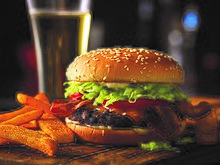 In 1969, local Seattle restaurant entrepreneur Gerry Kingen bought the restaurant and expanded it. The business dropped the "Sam's" and simply became Red Robin. The first restaurant was 1,200 sq ft (110 m²). It was a favored hangout for University of Washington students.[7][8] Kingen continued to operate the location as a tavern for a few years, but later added hamburgers to the menu, eventually giving fans 28 different burgers to choose from, and sales increased.

After 10 years of building the Red Robin concept Kingen decided to franchise it,[9] which proved to be significant in the development of the chain. Through franchising, and through one franchisee in particular, the chain drew its strength. Kingen's association with the company he founded later ended, but the franchising system endured, creating disciples of the gourmet burger format that extended the physical presence and geographic reach of the enterprise far beyond the efforts of its creator.

In 1979, Kingen sold Michael and Steve Snyder the rights to open a Red Robin in Yakima, Washington and The Snyder Group Company became Red Robin's first franchisee. In 1980, Red Robin opened a restaurant in Portland, Oregon. In 1983, Red Robin adopted a mascot named Red. In 1985, Red Robin boasted 175 restaurants when the corporate headquarters was moved from downtown Seattle to Irvine, California after CEO Kingen sold a controlling interest in Red Robin Corp. to Skylark Corporation of Japan and where Michael Snyder had Red Robin offices. With marginal successes and poor financial performance under Skylark's management, Kingen, then a minority owner, in 1995 stepped back into Red Robin with Michael Snyder to nurse the company back to profitability. In 2000, the company opened its 150th restaurant. The headquarters was moved to the Denver Tech Center. In 2000, Red Robin merged with the Snyder Group, and Snyder became president, chairman and CEO of the merged company. Snyder took the company public in 2002.

In September 2019, Paul J.B. Murphy III was appointed as President, Chief Executive Officer, and a member of the Company's Board of Directors, effective October 3, 2019.[citation needed]

In October 2019, the company announced plans to close its five locations in Alberta Canada by early December.[16]